The Global Burden of Disease 2010 study1 identified chronic kidney failure as one of the three causes of death with the greatest increase from 1990 to 2010.

Cardiovascular disease (CVD) is the most common cause of mortality and morbidity in patients with chronic kidney disease (CKD). CKD patients have up to a 3.5-fold increased risk of cardiovascular (CV) events.1 Despite these sobering observations, there is a paucity of evidence-based treatments for CKD patients on hemodialysis (HD).

Recently, increasing attention has focused on the use of the mineralocorticoid receptor antagonists (MRAs)—spironolactone, and eplerenone—in the treatment of CKD patients, including those on HD 2-5 (Table 1). The rationale for prescribing MRAs is compelling. The beneficial CV effects of MRAs have been attributed to several mechanisms, including their effects on CV remodeling, collagen turnover, oxidative stress and endothelial function 3,4 (Table 2).

As shown in Table 1, the early studies of patients undergoing dialysis were of relatively short duration and primarily assessed changes in blood pressure and the tendency to develop hyperkalemia.

More recently, Ando et al. 6 reported the results of the EVALUATE study. While the study cohort included hypertensive patients with non-diabetic CKD, and not ESRD patients on dialysis, the surrogate endpoint of a reduction in albuminuria was interpreted to suggest an improved clinical outcome. 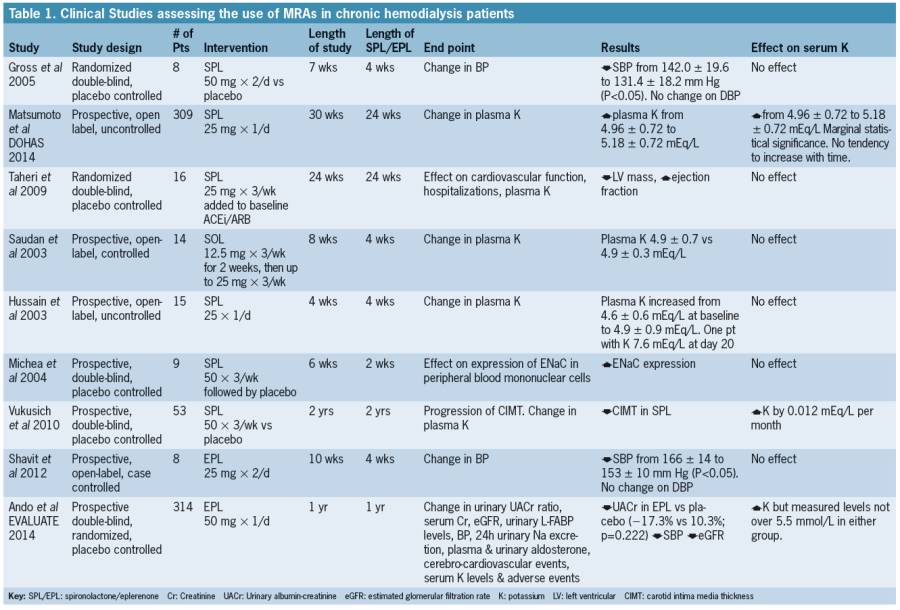 The study by Ando and colleagues was a prospective, double-blind, randomized, placebo-controlled trial that included 314 hypertensive patients with albuminuria (urinary albumin-to-creatinine ratio [UACR]: 30-599 mg/g) treated with angiotensin converting enzyme inhibitors and/or angiotensin receptor blockers. Subjects were randomly assigned to either an MRA or placebo. Although this large well-designed study adds to our knowledge of MRA’s role in managing hypertensive patients with albuminuria, there are limitations that confound interpretation.6,7

As I have recently proposed,7 despite differences in trial design, the above-cited results2,4,5 are sufficiently provocative to encourage additional large-scale, multicenter, randomized, double-blind, placebo-controlled trials necessary to provide a definitive answer as to the role of MRAs in patients with ESRD on HD.

One such trial, ALCHEMIST (ALdosterone Antagonist Chronic HEModialysis Interventional Survival Trial; NCT01848639), 8 is ongoing and plans to recruit 825 patients with a primary endpoint of time to onset of the first incident (nonfatal myocardial infarction or hospitalization for heart failure or nonfatal stroke or CV death).

Conceivably, ALCHEMIST and additional studies with finerenone (BAY 94-8862)9 will demonstrate a reduction in CV events in patients with ESRD on HD. The therapeutic role of MRA in the management of CKD and ESRD may be further amplified by the introduction of newer, chemically dissimilar MRAs.10 There are clear cut concerns regarding hyperkalemia.11 First, one must realize that the diagnosis of hyperkalemia should not be established by occasional or solitary determination of serum potassium. Repetitive serial determinations are necessary to ascertain if the hyperkalemia is sustained, or at times merely constitutes a transient and evanescent event.

Indeed, in the ALCHEMIST clinical trial,8 the recognition of fluctuations in potassium has necessitated the development of a telemonitoring loop, including the development of a point of care (measuring potassium, creatinine, plasma volume variations), to facilitate dynamically managing dose titration of the renin-angiotensin-aldosterone system (RAAS) inhibition regimen.

If approved, the potential availability of 2 new, non-systemic oral agents (patiromer and ZS-9) that sequester potassium in the gastrointestinal (GI) tract may obviate our current concerns regarding hyperkalemia,7,12,13 thereby facilitating maintaining patients on optimal therapeutic doses of RAAS inhibitors and MRAs. Hopefully, this will facilitate a further reduction in cardiovascular events.

In summary, the recent initiation of additional clinical trials of regimens comprising an RAAS inhibitor with add-on of an MRA in CKD /ESRD patients and the future availability of newer MRAs should further delineate the role of MRA-based treatment regimes in reducing CV events.

The potential availability of new oral agents to control RAAS and MRA-engendered hyperkalemia, by sequestering potassium in the GI tract, may permit MRA treatment in CKD patients despite reduced GFR. Collectively, these classes of drugs may comprise a novel treatment paradigm potentially promoting cardiovascular benefits and hopefully reduce healthcare costs in these very high-risk patients with CKD and ESRD on dialysis.

Murray Epstein, MD, FACP, FASN, is professor of medicine in the division of nephrology and hypertension at the University of Miami’s Leonard M. Miller School of Medicine.

Dr. Epstein is a consultant and on an Advisory Board or Panel for Relypsa, Inc, Redwood City, CA and OPKO Health, Miami, FL.

Offer Ebola Victims Dialysis If They Need It