Does this patient have lithium intoxication?

Lithium has become one of the essential drugs of modern psychiatry. It is a first line medication for bipolar disorders and it also has efficacy in the treatment of major depression. It is the only medication that has been shown to decrease the suicide risk in bipolar disorders. It also has a narrow therapeutic index with toxic manifestations seen at the upper end of the effective serum concentrations for the treatment of manic episodes (0.8 to 1.5 mEq/L).

The increased use of lithium over the past few decades has therefore led to an increase in the number of intoxications, both accidental and as a suicide attempt. In 2009, there were 6396 toxic exposures and 3 deaths reported to NPDS which is a 0.05% mortality rate (Figure 1). This is a 5 fold increase in reported lithium intoxications over the past 20 years. 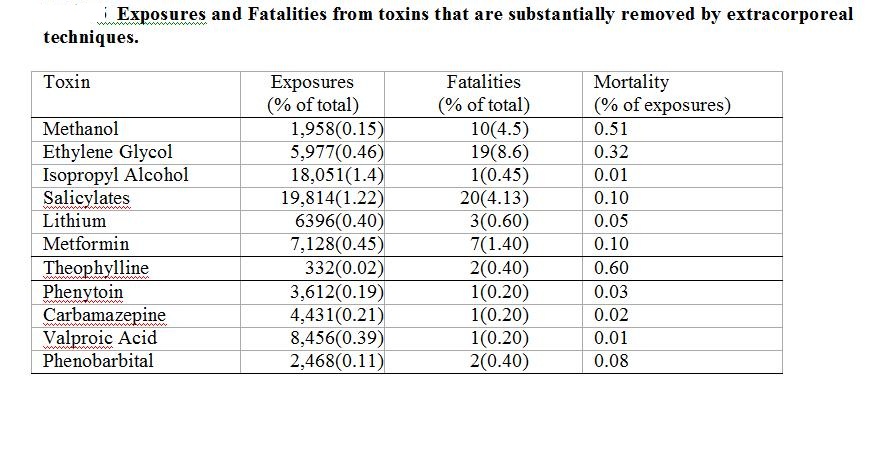 The risk of toxicity increases when it is used as long-term therapy, both in acute on chronic toxicity and with toxicity due to impaired elimination. Few patients sustain permanent sequelae of toxicity or require intervention with extracorporeal therapy, but the risk increases with duration of exposure, co-morbidities that decrease elimination and the actual serum lithium level.

Lithium is a cation and is usually administered with carbonate. It is almost completely absorbed in the stomach and proximal small intestine, with a peak serum concentration in 1 to 2 hours for regular-release preparations and 4 to 5 hours for therapeutic doses of sustained-release preparations but can increase to 3 to 4 days with toxic ingestions of sustained-release preparations. It is not bound to plasma proteins and has a low molecular weight (74 D), but its Vd is moderate (0.7 to 0.9 L/kg), slightly higher than that of total body water. Since the Vd for lithium is higher than other intoxicants discussed thus far, it has a larger percentage that is intracellular.

Lithium elimination is almost entirely by the kidney. It is freely filtered at the glomerulus and then 80% is reabsorbed. Factors that decrease glomerular filtration can increase lithium levels. The most common causes include angiotensin-converting enzyme (ACE) inhibition, angiotensin receptor blockers (ARBs), nonsteroidal anti-inflammatory drugs (NSAIDs), and age and illness related decrease in kidney function.

Effects on the kidney are seen with both chronic use and acute toxicity. They include tubular dysfunction such as a concentrating defect leading to nephrogenic diabetes insipidus and renal tubular acidosis, acute kidney injury and chronic kidney disease. The cardiovascular manifestations are more often seen in acute intoxication with high serum levels. They range from benign flattening and inversion of the T waves on the electrocardiogram to severe hypotension and cardiovascular collapse.

Lithium-related intraventricular conduction defects are observed with toxic concentrations of lithium in patients with established heart disease or those taking other cardiotoxic agents. Severe ventricular arrhythmias occur almost exclusively with acute intoxications. The gastrointestinal (GI) associated symptoms include vomiting and profuse diarrhea with acute ingestion and nausea with vomiting in chronic ingestion. Lithium is a cation and will therefore decrease the anion gap.

The clinical findings in lithium intoxication are listed in Figure 2. They depend more on the chronicity of the ingestion and the patient characteristics then the lithium serum level. Otherwise healthy patients can have almost no toxic signs at very high lithium serum levels (i.e., > 6 mEq/L) after an acute ingestion while older patients with comorbidities such as heart, kidney or liver disease can present with significant symptoms with chronic ingestion and a serum level at the high end of the therapeutic range (i.e., 2 – 3 mEq/L).

Hansen and Amdisen described a classification scheme for lithium toxicity as mild, moderate or severe depending on clinical signs and symptoms in 1978. Although they associated a serum level with these three categories, these authors and many others to follow have found little correlation between the serum levels and the severity of symptoms, especially in acute intoxication. It is clear that clinical symptoms rather than serum levels correlate best with severity of intoxication.

How should patients with lithium intoxication be managed?

Figure 3 describes the indication for hemodialysis in lithium intoxication. Since serum levels are poorly correlated with the degree of toxicity, they should not be used as the primary determinant in the decision to perform hemodialysis in lithium intoxication. Rather, indications for hemodialysis are related to the degree of intoxication as manifested by signs and symptoms and the likelihood that endogenous clearance of lithium will allow for non-toxic levels in less than 1 – 2 days (Figure 3).

Almost all patients with chronic ingestion and a level > 4 mEq/L will have severe toxicity and will need hemodialysis. Patients with a level 2.5 – 4 mEq/L should have hemodialysis if they have severe symptoms such as neurologic deterioration, hemodynamic instability, acute kidney injury or ventricular arrhythmia. Finally, patients with a serum level < 2.5 but with signs of toxicity and are likely to have continued toxic levels in 30 hours because of decreased renal clearance or prolonged GI absorption with increasing serum levels should also receive hemodialysis.

Lithium is readily dialyzable because of its low molecular weight, water solubility and lack of protein binding (
Figure 4). Although the extraction ratio of hemodialysis for lithium is high, lithium does have a moderate Vd (0.7 to 0.9 L/kg), is predominantly intracellular, and diffuses slowly across cell membranes limiting the total amount of lithium cleared in a dialysis session. Clearance constants for lithium during hemodialysis with high-flux membranes have been shown to be 150 – 200 cc/min which corresponds to a half-life ≈ 3.5 – 5 hours. A patient with a lithium level of 4 mEq/L would therefore require 2 half-lives or 7 hours of dialysis to bring the level to 1 mEq/L.

There continues to be some controversy regarding an endpoint for dialysis in lithium intoxication. The decision to perform hemodialysis should be made within the first 6 to 12 hours of admission using the degree of toxicity and projection of lithium levels over time as determinants.

There are little data to support it, but many authors argue that patients should undergo dialysis until the serum level is < 1 mEq/L. Patients will therefore require 6 to 8 hours of hemodialysis (depending on the initial level) to bring the final concentration to < 1 mEq/L. Serum levels should be checked at completion of dialysis to confirm adequate removal and then again at 3 – 4 hours after stopping dialysis to check for rebound. Dialysis should be repeated if the level is once again > 1 mEq/L.

Alternatively, continuous renal replacement therapy (CRRT) may be used as adjuvant therapy to follow initial hemodialysis in the case of significant rebound. Since CRRT has significantly slower lithium clearances than hemodialysis, it should not be used as initial therapy unless the patient will not be able to tolerate conventional hemodialysis or high volume CRRT is used. Neurologic improvement may lag behind improvement in serum lithium levels, cardiac toxicity, or gastrointestinal symptoms because of the slow equilibration of lithium from brain to blood.

Supportive care for lithium intoxication includes prevention of further absorption and methods to increase enteric and renal excretion. Activated charcoal is not effective in lithium intoxication. Whole bowel irrigation with polyethylene glycol is the method of choice to remove unabsorbed pills and is likely to be most effective in patients that present within 1 hour of ingestion or after taking a large amount of sustained-release lithium. It should also be considered in patients who have a rising serum level suggesting continued gastric absorption. Sodium polystyrene sulfonate (Kayexalate) administration has been shown to bind lithium and decrease absorption in both healthy volunteers and in toxic ingestions.

The dehydrated patient should be given crystalloid resuscitation but there is no data to support the use of forced diuresis or large volume saline infusion to increase elimination when the patient in not volume depleted.

Both techniques run the risk of causing volume overload and electrolyte disturbances. Amiloride to block distal reabsorption has not been shown to be effective in acute intoxication.

What happens to patients with lithium intoxication?

Lithium toxicity can be manifest in many organ systems including CNS, GI, renal, cardiovascular, endocrine, dermatologic and ocular but the hallmark of lithium toxicity is the impact on the CNS. Neurologic symptoms can range from fatigue and fine tremor to spasticity, seizures and coma. These symptoms can be seen even with therapeutic levels in chronic ingestions and can persist long after serum levels are negligible.

Its distribution into and out of tissues is variable and dependant on tissue type, patient age and chronicity of exposure. For example, the distribution of lithium into and out of the CNS may take days, which could explain the increased toxicity with chronic exposure and the delay in neurologic recovery even with low serum lithium levels. This slow distribution can result in a substantial rebound following extracorporeal therapy and leads to the recommendation to follow serum levels after therapy. Sixty percent of reabsorption occurs at the proximal tubule in the same process as proximal sodium reabsorption.

Factors that increase proximal sodium reabsorption such as volume depletion, cirrhosis, congestive heat failure (CHF) and thiazide diuretics will also increase lithium reabsorption. Lithium also has some reabsorption at the loop of Henle and distal tubule. Loop diuretics and amiloride can decrease the more distal reabsorption of lithium. Given its narrow therapeutic index and the number of drugs(e.g., ACE, ARB, NSAIDs, thiazides) and conditions (e.g., volume depletion, cardiac failure, liver failure, sepsis) that influence its excretion, it is not surprising that inadvertent lithium intoxication is fairly common. 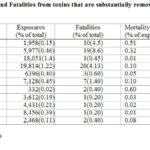