Does this patient have autosomal recessive polycystic kidney disease (ARPKD)?

Autosomal recessive polycystic kidney disease (ARPKD) is a rare autosomal recessive kidney disease (Figure 1) that usually manifests itself in newborns, infants, or young children. ARPKD typically affects both the kidneys and the liver. At birth, babies may present with large palpable flank masses that may cause difficult deliveries. ARPKD is often detected with fetal ultrasonography in utero. Dependent on the degree of renal function limitation in ARPKD, prenatal disease may give rise to oligohygramnios and a secondary Potter sequence. Many severely affected fetuses with a Potter sequence suffer from pulmonary dysplasia and die from pulmonary complications shortly after birth. On the other end of the severity spectrum, less severe forms of ARPKD may not be diagnosed until adolescence.

Severely affected babies may have physical manifestations of ARPKD, such as classic Potter facies (flattened nose, recessed chin, prominent epicanthal folds, and low-set abnormal ears) and other abnormal extremities often in association with oligohydramnios. Approximately 83% of ARPKD patients are born with congenital hepatic fibrosis (CHF). CHF results from a malformation of the ductal plate, cystic dilatation of the intrahepatic bile ducts (Caroli disease), and periportal fibrosis, which results in the development of portal hypertension. Patients who are affected by CHF are at an increased risk for developing ascending cholangitis and benign and malignant liver tumors, especially cholangiocarcinoma. The presence of cholangitis may influence the status of the CHF and the prognosis of the disease.

On ultrasonographic imaging, kidneys will appear enlarged, but retain a normal reniform shape. Cross-sections of the kidneys will reveal radially arranged cysts, more consistent with dilatations, extending from the cortex to the medulla. In neonates and young children, the kidneys are usually enlarged, but with age, will regress in size and lead to progressive renal insufficiency. Abnormal prenatal ultrasound findings include enlarged, hyperechogenic kidneys, a loss of corticomedullary differentiation, with or without cysts, and with or without oligohydramnios.

A clinical diagnosis can typically be made when a child presents with clinical and ultrasonographic findings and also, when both parents have a negative ultrasound after 30 years of age, thus excluding the presence of ADPKD. If diagnostic clarification is still needed, then a histological examination of a kidney or liver biopsy can usually distinguish between ADPKD and ARPKD. Other symptomatic indications of ARPKD include: severe and early hypertension requiring multidrug therapy to control; urinary tract infections; decreased glomerular filtration rate (GFR) which is rare in ADPKD children; palpable abdominal masses; and growth retardation associated with renal insufficiency.

Definitive diagnostic criteria for ARPKD have yet to be established. However, the criteria listed below are typically used by pediatric nephrologists:

Management of ARPKD includes ordering CBC with differential, platelets and comprehensive chemistry panels with phosphorus. For those with advanced renal insufficiency (CKD Stage 3 or 4) PTH, Vit D 25 and Vit D 1,25 would also be included. All patients with underlying renal disease will need a lipid panel since they are at higher risk for cardiovascular disease. Children with underlying renal disease should also have growth hormone levels checked regularly.

During the prenatal and neonatal periods, fetal ultrasonographic imaging is the primary modality for the evaluation of ARPKD. Ultrasound images of CHF typically show increased echogenicity of the liver, cysts in the hepatic parenchyma, and an enlarged spleen due to the presence of portal hypertension.

In older children, computed tomography (CT) and magnetic resonance imaging (MRI) can be used to evaluate the liver for the presence of congenital hepatic fibrosis. Contrast-enhanced CT imaging may also be used. Given the need for contrast materials and radiation exposure, this method is less desirable to use in infants. There is also a relatively new, noninvasive method using MRI called rapid acquisition with relaxation enhancement (RARE-MR). This method can provide an image of the whole urinary tract system within seconds and does not involve the use of contrast materials or radiation. MRI may be used to characterize the findings of ARPKD in utero.

ARPKD is an autosomal recessive disorder with a birth incidence of 1 case per 10,000-40,000 population. This is a monogenetic disorder resulting from mutations in the PKHD1 gene on chromosome 6p21.1-p12. The protein product of the PKHD gene is called polyductin or fibrocystin. The mutation frequency in this gene is estimated to be at 1 case per 70 in the general population. Since ARPKD is a recessive disease, both parents are carriers and carry one mutated copy of the ARPKD gene. Each pregnancy carries a 25% risk of inheriting the disease, while unaffected siblings have a 50% chance of being a carrier.

Newborns who present with clinical manifestations of severe ARPKD often die shortly after birth. In these individuals, two truncating mutations are typically identified. These types of mutations occur in a minority of ARPKD individuals who often have at least one missense mutation. Additionally, molecular diagnostic testing using direct sequential analysis is also available and can establish an ARPKD diagnosis between 77%-85% certainty.

Prenatal testing is possible using DNA extracted from fetal cells obtained by amniocentesis usually performed at approximately 15 to 18 weeks’ gestation or chorionic villus sampling (CVS) at approximately ten to 12 weeks’ gestation. Another form of genetic testing is pre-implantation genetic diagnosis (PGD). PGD is used to analyze the genetic make-up of embryos created through in- vitro fertilization (IVF) and can determine whether or not an embryo is free of disease.

Infants who survive the first year of life have a relatively good prognosis, with a probability of 80% beyond 15 years. Generally, the renal and hepatic diseases are inversely proportional to each other in individual patients. Children with severe kidney disease often have mild CHF and vice versa. With milder renal disease, the degree of renal functional impairment is less severe and perinatal respiratory compromise is not typical. These infants tend to present at slightly older ages with renal impairment. Infants with very little renal disease may have no renal functional impairment. In these patients, CHF leads to the development of hepatomegaly and portal hypertension. It is thought that the milder forms of renal disease in ARPKD enable the patients to survive longer and to undergo the inevitable progression of CHF.

Genetic testing for ARPKD is difficult for confirmation of a positive diagnosis. The complexity of the gene, the variability in mutation detection efficiency, and the high frequency of missense mutations requiring confirmation in parents or other affected sibs have complicated diagnostic testing capabilities and the interpretation of detected sequence variants.

Another issue with genetic testing is the presence of single-nucleotide polymorphisms (SNPs). While both SNPs and missense mutations can alter the severity or progression of the disease, mutations occur within a gene’s coding or regulatory regions and affect the function of the protein encoded by the gene. Unlike mutations, SNPs do not always affect the way a protein functions.

In order to provide accurate genetic based diagnoses, it has been recommended that haplotype analysis be used in conjunction with PKHD1 genetic testing. There is evidence that missense changes are more frequently observed among patients with a milder clinical course, while chain-terminating mutations are more commonly associated with a severe phenotype. Currently, there is no information available on the sensitivity and specificity of genetic testing for ARPKD.

How should patients with ARPKD be managed?

Patients with ARPKD should be evaluated using an imaging modality as needed once a diagnosis has been confirmed. Renal and liver complications drive the need for repeat imaging. Complications of ARPKD include, hypertension, urinary tract infections, and decreased GFR. Hypertension is typically severe and may be a presenting feature of ARPKD.

Angiotensin converting enzyme inhibitors and angiotensin receptor blocking agents are recommended for the first line therapy for the treatment of hypertension in this disorder. Cardiac hypertrophy, congestive heart failure, can also occur, with evidence of portal hypertension with our without evidence of congenital hepatic fibrosis.

Urinary tract infections should be treated quickly with agents that are appropriately dosed for the level of kidney function avoiding nephrotoxic agents with a long duration of therapy to assure sterilization of the urinary space. Evidence has also shown recombinant human growth hormone (rhGH) may benefit prepubertal children with growth failure. In addition, children with ARPKD may develop anemia and require intermittent injections of erythropoietin, which stimulates the production of red blood cells.

What happens to patients with ARPKD?

The diagnosis of ARPKD usually relies on a combination of imaging data, a complete family history, and genetic and clinical findings. Information from multiple ARPKD-affected children from the same family indicates that disease severity tends to be similar within families. This should be taken into account when counseling families.

Impaired renal function is present in 70-80% of infants, and discrete renal cysts in children may be an incidental finding. More than 50% of affected individuals progress to end-stage renal disease (ESRD), usually in the first decade of life. Hypertension is found in approximately 70% of ARPKD children, is relatively severe, and usually requires multi-drug therapy at a median age of 6 months. Both liver and renal disease gets progressively worse with age at variable rates.

Renal transplantation is the recommended renal replacement therapy in ARPKD-affected children. Affected kidneys typically terminate in ESRD, while liver synthetic function can remain normal, despite the presence of portal hypertension. Complications of portal hypertension are common as ARPKD children transition to adulthood and can be controlled with sclerotherapy or shunt surgery.

Ascending cholangitis is the most common life-threatening complication in young adult ARPKD patients. Liver transplantation may be needed for patients suffering from the effects of severe portal hypertension. Combined liver-kidney transplantation is an option for ARPKD patients suffering from severe portal hypertension and ESRD.

After adolescence, the transition between pediatric practitioners to adult practitioners should be seamless, so as to not disrupt treatment of the patient. Special care should be given to these situations: 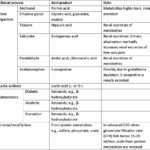