Idiopathic Interstitial Pneumonias (IIPs) are a group of heterogeneous disorders that collectively form a subset of Interstitial Lung Disesases (ILDs), classified together because they affect the interstitium of the lungs and need to be distinguished from other lung diseases. Fibrosis is generally the pathologic result of prolonged disease. These conditions may be classified according to clinical presentation, cause, radiologic manifestations, or pathologic manifestations.

The most recent American Thoracic Society/European Respiratory Society update of the classification of the IIPs is displayed in Table I. 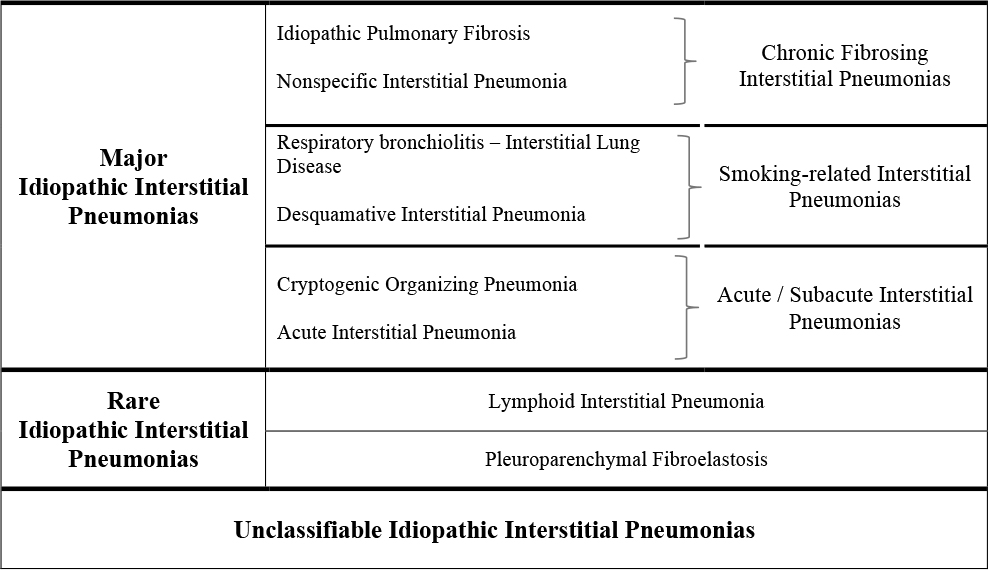 A. What is the differential diagnosis for this problem?

The differential for patients with IIP is both broad and varied. While there are multiple methods by which to classify these diseases, one option is to classify by their etiologies. There are seven categories that are frequently used:

1. Hypersensitivity Pneumonitis (HP): A great mimicker of Idiopathic Pulmonary Fibrosis (IPF), HP can develop from a multitube of exposures – namely bacterial and fungal agents; animal proteins and chemical exposures. Exposures can be further subdivided into organic and inorganic substances. This inorganic subdivision includes the pneumoconioses such as silicosis, coal, beryllosis, and asbestosis. The organic subdivision includes hypersensitivity pneumonitis.

5. Sarcoidosis: This can certainly present similarly to the IIPs and can share many radiologic similarities.

6. Miscellaneous: This category is used to capture diseases that don’t easily fit into one of the categories above.

The first is radiation pneumonitis. This is often associated with the use of pulmonary toxic chemotherapeutic options and can happen acutely (1-3 months) or chronically (> 6 months) after the radiation exposure. The second is an eosinophilic granulomatous disease also known as pulmonary histiocytosis X. It is a rare interstitial disease that affects young adults who are cigarette smokers. It is characterized by infiltration of the interstitium by Langerhans cells. Patients present with dyspnea and cough. This disease should also be considered in any young person with a spontaneous pneumothorax. It has an apical distribution on radiographs and diagnosis must be made pathologically. Smoking cessation is key in treatment, with no other treatments of any proven benefit.

Like many of the diseases above, lung transplantation provides an option for patients with end stage fibrosis.

B. Describe a diagnostic approach/method to the patient with this problem.

Many of the IIPs present similarly with progressive, exertional dyspnea and cough. To differentiate between them, a thorough history is crucial. Particular emphasis must be placed on the occupational history, past and present exposures to fumes, toxins and animals. Acquisition of prior Pulmonary Function Testing and radiographic imaging is vital to help understand the acuity and/or progression of the condition. An initial chest radiograph is typically available but ultimately a high resolution computed tomography (HRCT) of the chest will be of most value when evaluating for IIPs. After consideration of this data, the diagnosis remains elusive, a lung biopsy will be required to complete the diagnostic work up.

1. Historical information important in the diagnosis of this problem.

The following elements of history must be included:

2. Duration of symptoms – Symptoms that present within days to weeks are seen more so in AIP or COP. Subacute presentations are seen with RBILD and DIP, with the remaining IIPs being chronic in nature.

3. Cigarette smoking – In conjunction with the typical CT findings, a history of current, active smoking can clinch the diagnosis of one of the smoking-related IIPs. Most IIPs have strong associations with smoking, whereas Hypersensitivity Pneumonitis (HP) does not typically manifest in active smokers.

4. Past medical history – Exploring a history of rheumatologic disease, past pulmonary diseases (including pulmonary infections such as Tuberculosis), and malignancy is crucial. In addition, recognizing what medications have been used to treat these conditions will also be an important part of a medical history. For any patient with a past malignancy, inquiring about radiation treatments is also important.

5. Medication use – A thorough medication history with particular attention to amiodarone, chemotherapeutic agents and antibiotics is necessary.

6. Family History – A subset of IPF patients have familial IPF which tends to be autosomal dominantly inherited.

7. Occupational and environmental exposures – Any exposure to silica dust, beryllium, coal, or asbestos should make a practitioner consider a pneumoconiosis. A detailed past and present work and hobby history must be obtained. Environmental exposures can lead to hypersensitivity pneumonitis and so asking about molds, pets, air conditioners, hot tubs, metal or wood work and bird exposure is important.

2. Physical Examination maneuvers that are likely to be useful in diagnosing the cause of this problem.

The lung examination in patients with IIPs is generally nonspecific however, fine inspiratory crackles can often be auscultated at the bases. They are commonly described as Velcro like. Clubbing can also be seen and its presence can suggest advanced disease or if newly present – development of bronchogenic carcinoma. Cardiac examination will usually be normal. Late in disease, the findings of cor pulmonale secondary to pulmonary hypertension might be evident; with splitting of S2 and a prominent P2 component of S2. The remainder of the physical examination should focus on any signs of extrapulmonary disease such as joint inflammation, digital deformities, rash, sclerodactyly, which can suggest a connective tissue disease.

3. Laboratory, radiographic and other tests that are likely to be useful in diagnosing the cause of this problem.

There are very few laboratory tests that will point specifically to a certain diagnosis. If rheumatologic disease is considered, an antinuclear antibody and antibody testing for systemic sclerosis, rheumatoid arthritis, and systemic lupus erythematous can be performed. If there is renal involvement in the presentation, ANCA and antiglomerular basement membrane antibody testing can be undertaken to diagnose polyangiitis with granulomatosis or Goodpasture’s syndrome respectively.

Radiological testing forms one of the cornerstones of diagnosing IIPs. A chest radiograph is frequently the initial study that is available but seldom provides the necessary detail for diagnosis of an IIP. Chest x-ray findings are varied; ranging from a normal image to nonspecific reticular abnormalities, and possibly nodular patterns.

All patients suspected of IIP should undergo a high resolution CT of the thorax without contrast. There are certain patterns of findings that correlate with specific IIPs, which are displayed in Table II. It is important to note that although these are typical patterns, early stage presentations may not resemble them. Patients with respiratory symptoms and a high resolution CT scan consistent with a typical Usual Interstitial Pneumonia (UIP) pattern are considered to have IPF and managed as such. These patients do not require a surgical lung biopsy.

Pulmonary function testing is useful to support the diagnosis and assess the severity of the impairment. The majority of the IIPs have a restrictive pattern, reflected by a reduction in predicted Total Lung Capacity (TLC) to below 80% of its predicted value and also a reduced Carbon monoxide diffusing capacity (DLCO). Consequently, exertional oxygen desaturation can also be present.

Often, the clinical history and HRCT pattern will not support a single diagnosis and an open surgical lung biopsy is warranted. This decision should take into account the patient’s comorbidities and suitability to endure the risks of the procedure. Table III shows the common histopathological findings that are consist with the various IIPs. More recent recommendations support the use of MultiDisciplinary Discussions (MDDs) amongst clinicians, radiologists and pathologists to facilitate decisions on diagnosis and management in more ambiguous cases. Less invasive, bronchoscopic biopsies have low yield and hence are not recommended in this context. Bronchoscopy with bronchoalveolar lavage (BAL), transbronchial biopsies and endoscopic bronchial ultrasound guided fine needle aspiration (EBUS-FNA) of mediastinal and hilar lymph nodes however, can be performed to support alternate etiologies such as infection, hypersensitivity pneumonitis, sarcoidosis and drug induced pneumonitis.

C. Criteria for Diagnosing Each Diagnosis in the Method Above.

The diagnosis of IIPs is made by combining clinical information with radiographic and histologic findings. There are certain key points that can aid in pointing to a specific diagnosis. Clearly occupational exposures or findings that suggest rheumatologic disease aid in diagnosing the pneumoconioses or rheumatologic interstitial lung disease respectively. As discussed above, a history of medications that are implicated in pulmonary fibrosis is important for diagnosis.

Probably the most important criteria used in diagnosis is correlating radiologic patterns with specific diseases. Patterns on high resolution CT are well described (as noted in Table II). The most common cause of a typical UIP pattern on high resolution CT is IPF, however, other conditions such as CTD-related ILD, sarcoidosis, asbestosis and HP should also be considered. Findings isolated to the apical zones is more consistent with granulomatous disease and pneumoconioses. Diseases that tend to have more diffuse radiologic appearances include drug induced pneumonitis, radiation pneumonitis, sarcoidosis, and rheumatologic interstitial lung diseases. It is important to remember that there can be significant overlap and that none of the radiographic patterns seen are pathognomonic for any one interstitial pulmonary disorder.

III. Management while the Diagnostic Process is Proceeding.

A. Management of Idiopathic Interstitial Pneumonias and Acute Exacerbations.

The initial management of interstitial lung disease focuses on supportive care. Table IV summarizes the management of the various IIPs. After a patient comes to medical attention, the diagnostic work up, which includes laboratory testing, radiographic examination, and pathologic diagnosis can take some time. During this time, patients need to be assessed for hypoxia and given supplemental oxygen if needed. If their pulmonary status is poor, as is often measured by a 6-minute walk test, they can be referred for pulmonary rehabilitation. Current smokers should be encouraged to start a smoking cessation program. Those with current occupational or environmental exposures must be removed from the inciting source. If patients are currently taking a suspected drug, it must be discontinued. Finally, steps must be taken to prevent against further comorbidities and so appropriate vaccinations (such as pneumococcal) are recommended.

Although IPF is a chronic disease process, acute exacerbations tend to occur in approximately 5% – 15% of patients. These are defined as clinically significant episodes of respiratory decline within the past 1 month that are accompanied by radiographic alveolar opacities not explained by cardiac etiologies. This being said, the initial step here would be to first address other causes of hypoxia such as infection, pulmonary embolism and pneumothorax. The lack of strong evidence to support management of acute exacerbation of IPF had led to a weak recommendation to use corticosteroids. The remainder of care is supportive, as listed in Table III. Avoidance of mechanical ventilation is also sensible given that the lowest mortality found in these patients is reported to be 87% at the very minimum. In this circumstance, palliative care input may also be beneficial.

Certain patients with IPF may qualify for one of the two recently Food and Drug Administration (FDA) approved medications for IPF management. Although not started in the inpatient setting, frontline clinicians should be aware of these previously unavailable medications, which patients may pursue with their pulmonologist. These oral medications are Pirfenidone, a fibrosis-propagating cytokine inhibitor, and Nintedanib, a tyrosine kinase inhibitor. Both agents have been shown to slow disease progression by reducing the rate of FVC decline but, not significantly impact mortality. Lung transplantation is also offered to patients who satisfy the relevant criteria and have moderate to severe disease.

Strong recommendations exist against the use of warfarin, imatinib, ambrisentan or combination therapy with prednisone, azathioprine and N-acetylcysteine (NAC) for the treatment of IPF.

B. Common Pitfalls and Side-Effects of Management of this Clinical Problem.

Nintedanib and Pirfenidone can both cause elevation of liver function tests (LFTs) and hence should be held if a patient on either of these medications presents with LFTs greater than three times the upper limit of normal.