Waardenburg’s syndrome (WS) was first described in 1951 by Waardenburg, a Dutch ophthalmologist. It is an autosomal dominant genetic disorder characterized by piebaldism (congenital poliosis and leukoderma), pigmentary abnormalities of the iris, lateral displacement of the inner canthi of the eyes (dystopia canthorum) and sensorineural deafness. Deafness is associated with the absence of neural-crest derived melanocytes from the stria vascularis of the cochlea, due to failure of melanoblasts to migrate or survive. The disease is classified into 4 clinical types, based on particular clinical characteristics (Table I):

WS type 1: This is the classic form. It is characterized by congenital depigmentation and craniofacial abnormalities. The most common pigmentation abnormality is poliosis, while other less commonly encountered abnormalities include depigmented white patches of skin and pigmentary abnormalities of the iris, such as heterochromia irides (differently colored eyes), partial heterochromia irides (variations of color within an iris), and hypoplastic blue irides. The hallmark craniofacial defect found in virtually all WS1 patients is dystopia canthorum (widely set eyes), which can be measured by the W-index. Moreover, a broadening of the nasal root and synorphrys may be present. Congenital deafness may also exist.

WS type 1: It is characterized by abnormalities associated only with melanocytes. There is no dystopia canthorum. It presents with poliosis, depigmented white patches on the skin, heterochromia irides, and congenital sensorineural deafness.

WS type 3 (Klein-Waardenburg syndrome): It has been regarded as a variant of WS1 and presents with WS1 features with additional axial and limb musculoskeletal anomalies. It has been suggested that homozygous WS1 (as has been reported in offspring form consanguineous heterozygous WS1 parents) may be a cause of WS3.

WS type 4 (Klein-Waardenburg syndrome): It presents with a phenotype similar to that of WS3 but with the additional feature of Hirschsprung’s disease, which manifests with congenital aganglionic megacolon. Hirschsprung’s disease results from deficient neurons of the intestinal neural plexus which, like melanocytes, are derived from the neural crest. There is no deafness.

Diagnosis of WS is usually made on clinical grounds, with pigmentary abnormalities being evident at birth. Sensorineural deafness may be confirmed by hearing screening.

Dystopia canthorum is measured by the W-index, contributing to diagnosis.

The clinical distinction between WS1 and WS2 can be difficult and molecular diagnosis is necessary to differentiate these two types. Mutation analysis of the PAX3 gene is available to establish diagnosis for WS1 and WS3.

As the phenotypes of WS are variable even within a family and may be nonpenetrant in some individuals, in 1992 the WS Consortium developed diagnostic criteria for genetic and phenotypic studies. According to these criteria, for a patient to be diagnosed as affected with WS1, he/she must have either: a) at least 2 of the major criteria, or b) one of the major criteria and 2 of the minor criteria (not including the rare criteria). Furthermore, for a patient to be diagnosed with WS2, there must be 2 major criteria present, with no dystopia canthorum.

The differential includes other congenital or acquired disorders characterized by depigmented skin lesions:

3. Other skin diseases with hypopigmented macules or patches:

WS is relatively rare, although it is thought to be a more global disease of neural crest development compared to piebaldism. It affects males and females with an equal frequency with an estimated incidence of approximately 1 per 20,000-40,000. There is no racial or ethnic predilection.

It has been suggested that there are additional clinical types of WS, associated with distinct genotypes.

WS type 1 and 3 result from mutations of the PAX3 transcription factor gene which has been mapped to human chromosome 2q35-q37.3. The importance of PAX3 for the expression of MITF, with consequent effects on melanocyte survival during development, seems to be responsible for pigmentary defects of WS1 and WS3. PAX3 also seems to be involved in the development of bony and cartilaginous structures of the face from neural crest-derived cell types, as well as in skeletal development.

WS type 2 has been attributed to a mutation of the MITF which is located on chromosome 3p12. Additionally, mutations in the SLUG gene have been reported, although there are cases of WS2 with no mutations in MITF or other known pigmentation genes, suggesting additional roles for yet unidentified genes. The restricted phenotype of WS2 may also be explained by the fact that MITF appears to be important for the development and function solely of the melanocytic lineage.

WS type 4 is caused by a heterozygous mutation of the SOX10 gene or homozygous mutations either in the gene encoding the peptide ligand endothelin-3 (EDN3) or its receptor (EDNRB). These genes are important determinants of the development of the neural crest-derived enteric nervous system cells that innervate the distal part of the colon. The transcription factor SOX10/PAX3 binds to the promoter of the MITF gene to express the MITF which in turn stimulates the expression of KIT. Therefore, WS4 can be a result of a defect of any one of these transcription factors that can reduce c-KIT production.

A screening program in Colombia identified 95 affected WS patients among 1,763 deaf individuals. 62% had WS2 and 38% WS1. In addition to sensorineural deafness in all, the most frequent features were broad nasal root (58.9%), a first degree relative affected (37.9%), heterochromia irides (36.8%), skin hypopigmentation (31.6%), white forelock (28%), intense blue iris (27.4%) and hypoplasia alae nasi (1.1%). The majority of individuals had normal psychomotor development (87%) while developmental delay was found in 13%.

Mortality risk in WS patients is similar to that of the general population.

Explain the natural history of WS to the patient. It is a stable, noncontagious disease.

Medical treatments are not effective for WS.

Surgery may be beneficial for severe dystopia canthorum, cleft lip or palate, and Hirschsprung’s disease.

Cosmetic camouflage may be used for limited skin depigmentation

Optimal therapeutic approach for WS requires a multidisciplinary approach including:

Genetic counseling should highlight the following:

Although poliosis is characteristically a congenital finding that may be associated with Waardenburg syndrome, rarely poliosis may be acquired, even due to plucking of hair. When assessing the differential diagnosis including vitiligo and Vogt-Koyanagi-Harada syndorme, inquire about this history.

Farrer, LA, Grundfast, KM, Amos, J. “Waardenburg syndrome (WS) type I is caused by defects at multiple loci, one of which is near ALPP at chromosome 2: first report of the WS consortium”. Am J Hum Genet. vol. 50. 1992. pp. 902-13. Development of diagnostic criteria for WS1.

Pingault, V, Ente, D, Dastot-Le Moal, F. “Review and update of mutations causing Waardenburg syndrome”. Hum Mutat. vol. 31. 2010. pp. 391-406. (An update on all WS genes and mutation databases and a discussion of the applications in diagnostics and genetic counseling in WS patients.) 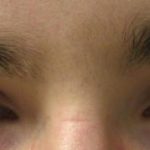