Unilateral laterothoracic exanthem (ULE) usually presents in a healthy child who is generally asymptomatic. Patients may report preceding vague constitutional symptoms such as a low grade fever, upper respiratory symptoms or gastrointestinal symptoms. The prodrome is usually within days to weeks of the onset of the exanthem. Mild pruritus may be present in more than 50% of patients.

Characteristic findings on physical examination include

Initial phase: The rash is unilateral, most commonly localized to the lateral thorax, particularly near the axilla or other periflexural areas such as the inguinal area. Typical lesions are small, erythematous and usually eczematous papules surrounded by a pale halo, but the morphology may be variable. When examining the patient asking them to show the rash, one arm only is raised – this has been affectionately referred to as the ’Statue of Liberty’ sign (Figure 1). 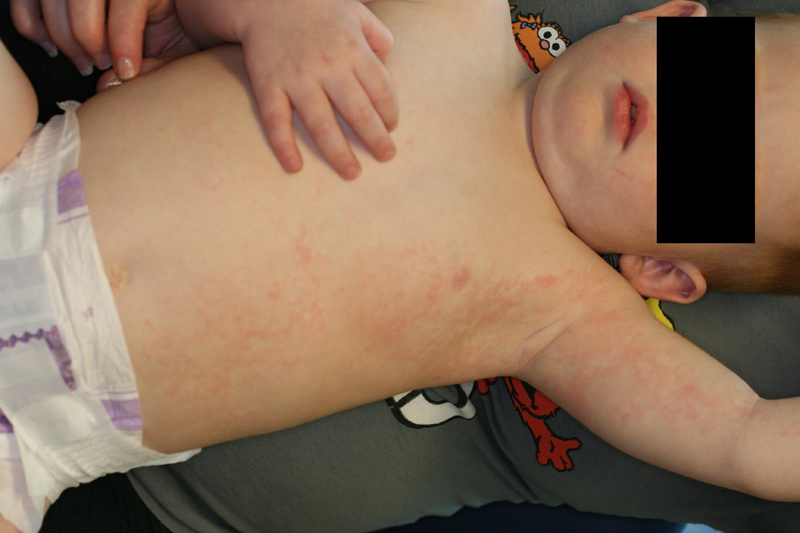 In the first week, the exanthem spreads centrifugally. At this point, it may also take on a more inflammatory or annular appearance. Eventually, the eruption becomes more confluent and evolves to appear more morbilliform or eczematous.

Secondary phase: In the second to third week, the rash may spread to involve the contralateral side. The rash always tends to remain asymmetrical favoring the initial side of involvement however.

Diagnostic studies are generally not indicated as the diagnosis is made on a clinical basis.

ULE almost exclusively occurs in children. The average age of onset is 2 years old. A greater number of females than males are affected. ULE mostly occurs in winter and spring.

The cause is unknown. A viral etiology is suspected. Case reports have suggested possible association to Epstein-Barr and parvovirus B19.

No systemic complications have been associated with ULE.

No specific treatment is indicated for ULE.

This is a self-limited disease that requires no specific treatment. If the patient is symptomatic, then treatment options include emollients, topical steroids and anti-histamines.

ULE is self-limited and resolves spontaneously within 4-6 weeks. No long term follow-up is generally necessary. 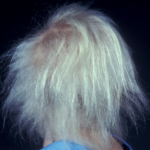