The history is straightforward in most patients with polydactyly; they are born with an extra finger. Key elements of the history include:

– Family history of polydactyly or other congenital limb difference

– Prior treatment (ligation in the nursery)

– Complications such as bleeding, infection, trauma, or vascular compromise

Ulnar-sided polydactyly is duplication of the small finger and is often bilateral. The most common finding is a single phalanx (with or without a nail) attached by a soft-tissue bridge to the ulnar border of an otherwise normal small finger. It may range from complete duplication of a ray including metacarpal and three phalanges to a small skin tag. Usually, the more ulnar digit is less well-developed, but check for function in both digits as well as size and alignment (Figure 1).

Radial-sided polydactyly is duplication of the thumb, but is more accurately described as a split thumb. The split may involve some or all of the bones in the thumb; the most common configuration is complete split of the distal and proximal phalanges, articulating with a bifid metacarpal head. Less common configurations include pedunculated lesions. digits with no bony attachment to the dominant thumb and split thumb with triphalangeal thumb (where one or both thumbs has an extra phalanx). Regardless of configuration, neither half of the split thumb is normal. They are usually smaller, are often angulated, and may have limited motion if the split extends into a joint. Also, the soft tissue structures, such as the tendons may be split, abnormally attached, or hypoplastic.

Plain radiographs will demonstrate the skeletal anatomy of the polydactyly and should be obtained in all cases of polydactyly except when the part is pedunculated and the rest of the hand examination is clearly normal. No other diagnostic tests are routinely indicated.

None beyond physical examination and radiographs.

Overall, polydactyly is the most common congenital hand anomaly. The true incidence is unknown because many pedunculated polydactylous digits are ligated in the newborn nursery. Incidence varies considerably by race: ulnar-sided polydactyly is 10 times more common in African Americans compared to Caucasians. Central polydactyly is very rare.

Central polydactyly is duplication of the index, long or ring fingers. When combined with syndactyly (synpolydactyly) it is familial and linked to a HOXD13 gene mutaion on chromosome 2. Other forms of central polydactyly are sporadic or may be syndromic.

Radial-sided polydactyly may have autosomal dominant inheritance, but most cases are sporadic, unilateral and not associated with systemic or syndromic conditions. Thalidomide ingestion can result in triphalangeal thumb polydactyly.

Genetic and environmental factors interact during the fourth through seventh weeks of gestation to produce polydactyly.

Observation is necessary for complete duplication of a non-thumb digit that is fully functional. Ligation is appropriate only for pedunculated digits attached by a narrow soft tissue bridge, often leaving a skin tag which may develop a sensitive neuroma. Surgical excision is suitable for skin only or broad-based polydactyly with no bony attachment. This can be performed in the office under local anesthesia in early infancy.

Surgical reconstruction is not a simple amputation. For polydactyly with bone attachment, parts from both polydactylous digits may need to be utilized in reconstructing a maximally functional digit. Surgery is deferred until after 1 year of age when anesthesia is safer, but it should be done prior to school age. Essential steps include:

Skin tags should be kept under observation or removed by office excision under local anesthesia.

Pedunculated polydactyly with a narrow base (less than 2mm) can be removed by ligation or office excision under local anesthesia.

Procedures for polydactyly with no bony attachment include:

After ligation, a return to the office is necessary after autoamputation of the part and for complications (bleeding, infection, failure to autoamputate within 2 weeks).

After office excision, remove the dressing after 2 days and leave open. Wash daily with soap and water as needed after 2 days. Return to the office for bleeding, infection, or regrowth of the skin tag.

After surgical reconstruction a cast is needed for 2 weeks, then a daily wash with soap and water. Post-operative office visits are necessary at 2 weeks, 2 months, 6 months, 1 year, then yearly until age 6 to check for appropriate growth and function. Corrective surgery may be necessary to treat long-term complications including angulation, contracture, bony prominence, neuroma, hypoplasia, and stiffness.

A central or ulnar-sided polydactyly may be left in situ at the discretion of the parents if all digits are normal in appearance and function. Thumb polydactyly involving only the distal phalanx may be left in situ if the duplicated part is diminutive and does not interfere with function. Deletion may still be desirable for social acceptance and for practical considerations such as wearing gloves.

Polydactyly should be considered in the differential diagnosis for any “wart” along the ulnar border of the small finger, particularly near the metacarpophalangeal joint. Excisional biopsy is therapeutic and diagnostic. Pathology often reveals a neuroma.

Synpolydactyly may hide a polydactylous digit between two syndactylized digits. Suspect synpolydactyly if the digits are angulated or do not have full range of motion. Plain radiographs are diagnostic and essential for pre-operative planning.

(The anatomic variation, classification, surgical treatment and outcomes of surgical intervention are reviewed for polydactyly.)

(This article presents clinical and molecular features of synpolydactyly including a discussion of typical features, minor variants, and unusual phenotypes.)

(This is the updated Mayo Clinic experience with thumb duplication and their preferred operative procedures.)

(This is a review of ten patients with 13 symptomatic polydactyly ligation stumps who underwent surgical revision.) 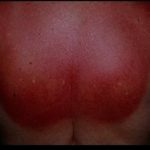