Patients present with a history of skin lesions, which may be of prolonged duration (Figure 1).

The size of the skin lesions varies widely, from less than 1cm to up to 30cm in their greatest dimension. Lesions are most commonly described as nodules, plaques, papules, or papulonodules. Approximately one-third of patients will present with a single lesion, the remainder with two or more lesions.

Patients with multiple lesions most commonly has involvement of a single region of the skin, but a substantial minority (19/72 cases reported in the medical literature between 1990-2006) have involvement of multiple skin regions. The most common sites of involvement were the torso (including breast, back, and genitals), head and neck region, and lower extremities.

The overlying epidermis is normal or demonstrates nonspecific changes such as akanthosis. Diagnostic histologic findings are identified in the superficial and deep dermis, which is involved by an infiltrate which often has a perivascular distribution and consists of admixed inflammatory cells including plasma cells.

The diagnostic cells are histiocytes which demonstrate prominent emperipolesis (phagocytosis of intact neutrophils, plasma cells, and lymphocytes) (Figure 2, Figure 3). Immunohistochemistry, when performed, confirms the histiocytic lineage of the diagnostic cells, which are commonly CD68+, S100+, lysozyme+, and CD1a-.

The morphologic features are indistinguishable from cutaneous involvement by systemic Rosai-Dorfman disease (sinus histiocytosis with massive lymphadenopathy), a systemic disease which commonly involves the lymph nodes; clinical correlation is necessary to differentiate the 2 entities.

The presence of prominent empiropolesis distinguishes cutaneous Rosai-Dorfman disease from malignant monocytic or histiocytic disorders such as monoblastic sarcoma or histiocytic sarcoma, and from granulomatous inflammation.

Classical Hodgkin lymphoma, which is very rare in the skin, is distinguished by the presence of Reed-Sternberg cells and mononuclear variants, which are large malignant cells with eosinophilic macronucleoli and have the following immunophenotype: CD15+, CD30+ (the first 2 with a membranous pattern of staining and Golgi accentuation), CD45-, and weakly nuclear Pax-5 positive.

The typical patient is a middle-aged female of Asian descent. Cases reported in the English language medical literature since 1990 report a 1:0.5 female:male gender ratio with an apparent preponderance of cases arising in natives of East Asia.

Etiology is unknown. An infectious etiology has been hypothesized, but an infectious agent has not been consistently identified in patients with systemic or cutaneous disease.

Given that systemic Rosai-Dorfman disease (sinus histiocytosis with massive lymphadenopathy) is morphologically and immunophenotypically identical to cutaneous Rosai-Dorfman disease, and may in fact represent a variant clinical presentation of the same disorder, it is difficult to assess the clinical associations of patients with strictly cutaneous disease.

Patients may present with immune disorders such as polyarthralgia, asthma, or hemolytic anemia. Mild polyclonal hypergammaglobulinemia and reversal of the peripheral blood lymphocyte CD4:CD8 ratio may be observed. Similar findings have been identified in patients with predominantly cutaneous disease, and are relatively nonspecific and thus largely unhelpful in arriving at a definitive diagnosis.

Accordingly, the appropriate workup consists of a thorough physical examination, including assessment of number and type of skin lesions, as well as determination of lymphadenopathy. For the latter, radiographic evaluation by positron emission tomography (PET) may be of importance.

Due to the limited nature of the literature, which consists almost entirely of case reports and small series, it is difficult to draw definitive conclusions about the best therapeutic approach. Numerous options have been attempted, as summarized in the largest review of the subject (see Frater et al).

Female patients with small (less than 1.5cm in greatest dimension) lesions and normal laboratory data appear to have the best outcome. Factors associated with less than optimal outcomes include larger lesions and male gender. The following therapies have been reported in the medical literature between 1990-2006:

Two patients had no response or progressed with this therapy alone. Intralesional steroid therapy, reported in two cases, resulted in stabilization in one case and partial resolution in another patient.

Retinoids with or without steroids (eight cases) were associated with partial response in three patients and complete resolution of lesions in one patient. In cases for which sufficient detail was provided, isotretinoid 30mg daily was used (duration not stated) in seven of these cases, and retinoid acid (further information not provided) was used in one patient.

Three patients were reported. The first had partial resolution of his previously extensive disease after treatment with a combined chemotherapeutic regimen consisting of vinblastine, methotrexate, steroids, 6-TG, and leucovorin. Two were treated with the antiangiogenic drug thalidomide and demonstrated partial (one patient) or complete (one patient) resolution of lesions.

Simple excision of the lesions was the most commonly employed treatment, reported in 21 cases. Although a favorable response was reported in a high percentage of cases, approximately one-third of patients had a recurrence within 4 years of surgery. The addition of topical steroids may confer a benefit, since one patient treated with both modalities had a reported long-term (>10 year) disease-free follow-up.

Four cases have been reported, of which two have had resolution, the others without resolution in lesions. Of note, the addition of steroids does not appear to have a significant effect, as the one case in which a combined approach was attempted did not have significant changes in lesions.

One patient has been treated by this modality (further detail not provided) and has had a reported moderate improvement in lesions.

Has not been reported in the medical literature.

Has not been reported in the medical literature.

Construction of a “therapeutic ladder” for cutaneous Rosai-Dorfman disease is difficult due to the paucity of cases in the literature and the heterogeneous nature of treatment and reportage. Nevertheless, based on available data and the authors’ experience, the following treatments appear to hold the most promise.

The most frequently attempted approach appears useful as a first therapeutic option in patients with limited disease, and with disease limited to body areas amenable to surgical intervention.

The relatively high percentage of treatment failures is of concern, however, and may be ameliorated by concomitant localized steroid treatment (intralesional or topical) applied to the lesions and perilesional skin prior to and/or following excision. However, the scientific rationale for this approach is largely conjectural, as it assumes the outcome for the one patient treated by this approach (see above).

For patients who refuse surgery, have more extensive disease, or for uncommon cases involving sites for which a surgical option is not practical, the medical option which has been most extensively used and is associated with the best efficacy and least risk is class I topical steroids or intralesional steroids (triamphenalone 10-20mg/mLx1cc). Other treatments, particularly for more diffuse disease or for patients who fail the above therapies include oral methotrexate in doses of 15-25mg weekly.

The major challenge in the management of patients with this entity is to successfully differentiate it from the generally more aggressive systemic Rosai-Dorfman disease. A careful physical examination at initial presentation, and at follow-up appointments is important to determine the presence of extracutaneous disease, particularly in the lymph nodes.

There is likely significant clinical overlap between systemic and localized Rosai-Dorfman disease, and thus clinical behavior may be difficult to predict. The presence of abnormalities in the complete blood count (most notably anemia and thrombocytopenia), erythrocyte sedimentation rate (ESR), and serum immunoglobulin fractions have been noted in localized and systemic Rosai-Dorfman disease, but do not appear to correlate with disease severity, extent of involvement, or outcome.

There are no criteria indicating when to treat patients. A specific maintenance therapy regimen is not recommended. In patients treated with simple excision of single lesions, recurrent lesions at the same site or the development of new lesions indicates a failure of therapy.

The treatment of patients who have failed their initial therapy is not addressed in the primary literature re-excision of new lesions may be useful, although the likelihood of a long-term disease-free state in such individuals appears low. The combined use of steroids and surgical excision may be useful in patients who have recurred following simple excision of their initial lesion(s).

The most important unusual clinical scenario is that of a patient who initially presents with disease limited to the skin and later develops systemic involvement. Such cases are rare in the literature but underscore the importance of thorough physical examination throughout his/her clinical course, particularly if the patient develops signs and symptoms of more extensive disease.

Frater, JL, Maddox, JS, Obadiah, JM, Hurley, MY. “Cutaneous Rosai-Dorfman disease: comprehensive review of cases reported in the medical literature since 1990 and presentation of an illustrative case”. J Cutan Med Surg. vol. 10. 2006. pp. 281-90. (Currently the most comprehensive review of the entity, summarizing all known cases reported in the English language medical literature between 1990-2006.)

Al-Khateeb, TH. “Cutaneous Rosai-Dorfman disease of the face: A comprehensive literature review and case report”. J Oral Maxillofac Surg. vol. 74. 2016. pp. 528-40. (Literature review categorizing all cases reported in the literature and treatment responses. Overall, the combined cure rate was only 28.6%. Surgical excision was the most effective while corticosteroids were the least effective.)

Maia, RC. “Rosai-Dorfman disease: A report of eight cases in a tertiary care center and a review of the literature”. Braz J Med Biol Res. vol. 48. 2015. pp. 6-12. (Small case series in which various treatment modalities were tried. Regardless of the treatment, there was an overall favorable prognosis during the follow-up period of 15-80 months.) 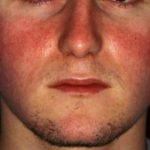