Prototechosis is a rare infectious disease that can be primary cutaneous, subcutaneous, articular (olecranon bursitis) or systemic. Usually protothecosis is not suspected clinically.

The history of trauma, surgery, orthopedic procedures, insect bites, or penetration of the agent through skin injury in contact with contaminated water is very common. In most described cases, there is a history of immunosuppression (local or systemic), such as steroid use, malignancy, diabetes mellitus, and organ transplantation.

Diagnosis confirmation should be made with the utilization of mycologic tests and pathological evaluation. The histophatologic evaluation of protothecosis is similar to that observed in subcutaneous mycotic lesions. It shows a suppurative and granulomatous infiltration in the dermis or subcutaneous tissue (Figure 4). This infiltrate includes giant cells, lymphocytes, histiocytes, eosinophils and necrosis. In addition, there are many solitary spherical spores that measure 6 to 10 µm with giant cells.

Prototheca must be differentiated from some fungal infections. Prototheca appears only with special staining such as periodic acid schiff (PAS), gomori methenamine-silver (GMS) or Griedly fungal staining. PAS is the best special staining that enables the visualization of the cell wall and also the diagnostic internal septations. This algae has a characteristic morula-like sporangia containing multiple endospores (Figure 5). Species of Prototheca are differentiated by the size of their sporangia and number of autospores.

P zopfii does not form multiple septate structures. P wickerhamii presents a morula form of sporangia that containing from 2 to 20 autospores symmetrically arranged like a daisy. It is important to know that the sporangia of Coccidioides immitis and Rhinosporidium sp. are larger and contain somewhat smaller endospores and multiple sporangia. The spores have internal septations of a cartwheel-like appearance.

The specific diagnosis of cutaneous protothecosis could be confirmed by culture of skin tissues (Figure 6).The culture of this microorganism should be performed between 27o to 30o C, on Sabouraud’s dextrose agar plates, beef infusion broth, blood agar, and brain-heart infusion agar. These cultures proliferate within 48 hours. Prototheca forms creamy, yeast-like colonies. These cultures could be inhibited by ketoconazole, amphotericin B, cycloheximide and tetracycline. Carbohydrate assimilation patterns or immunofluorescence testing can be used to identify the causative organism. For example: P.zoffi or P. stagnora does not assimilate galactose or trehalose.

The algae is ubiquitous in nature and has a world-wide distribution. It is found in beef, pork, crabs, plant products, soil and water in tanks, swimming pools, lakes, sewage, slime flux of trees, industrial ponds and tap water. Approximately 100 cases of this human disease were reported over 25 years in USA, Africa, Asia, Brazil, and some European countries.

Protothecosis is caused by the achlorophyllic algae of the genus Prototheca. This genus consists of multiple species of nonpigmented algae from the family Chorellaceae. These microorganisms are microscopic, unicellular, achlorophyllous, saprophytic and reproduce asexually by endosporulation. Four species are recognized: P wickerhanii, P zopfii, P stagnora and P filamenta. The first species is the principal agent in human cases of infection and P zopfii is also known to infect humans.

The pathogenic mechanisms of the organism remains unclear, but it is believed that they may infect humans by contact with a potential source such as contaminated water and soil, or by traumatic inoculation of the algae, or during surgery or orthopedic procedures.

These organisms are likely of low virulence in patients with an intact immune system. The infection usually spreads indolently in local areas but may be more widespread in immunocompromised hosts. This disease is not thought to be transmitted from person to person. The incubation period is unknown, it has been speculated to be weeks to months.

The course of protothecosis is one of a chronic, low-grade inflammation that may be indolent. There is one case described of an immunocompromised host who developed disseminated cutaneous protothecosis with pulmonary involvement.

Although treatment of protothecosis is a subject of controversy, the literature suggests using treatments with antifungal agents that have an inhibitory action on ergosterol metabolism (the component of the algae cell membrane). Imidazole antifungal agents may be the first choice in limited cutaneous infection in immunocompetent patients. Itraconazole appears to be the most effective agent of this drug class, and should be administered at 200 mg once a day for 2 months. Hepatotoxicity with ketoconazole has been described.

Intravenous administration of amphotericin B has been recommended for disseminated cases or visceral protothecosis occurring in immunosuppressed patients.

Surgical procedures have been recommended for localizated lesions.

A recently study shows the in vitro efficacy of some essential oils to complement protothecosis therapy in animals and human beings.

Patients should be re-evaluated clinically, histologically and or mycologically, some weeks (2-7) after the treatment to be sure of total remission.

There are reports of cutaneous and noncutaneous protothecosis in AIDS patients presenting with meningitis and tenosynovitis. 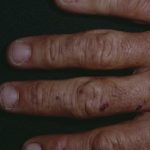