Porocarcinoma is a rare malignant neoplasm of the eccrine or apocrine gland that usually presents clinically as a firm erythematous to violaceous nodule or verrucous plaque ranging in size from 0.4 cm to 20.0 cm with an average of 2.2 cm (Figure 1). Lesions tend to ulcerate.

Histologically, eccrine and apocrine porocarcinomas are indistinguishable (Figure 2). A longstanding history of the lesion is commonly obtained, although rapid development or recent change in the lesion has also been described. In contrast to the benign eccrine poroma, porocarcinoma does not show a predilection for locations with the highest density of eccrine glands, as it is most common on the lower extremities and is also observed on the head and neck, trunk, vulva, breast, nail bed, and upper extremities. Symptoms of malignancy or malignant degeneration to be alert for include spontaneous bleeding, pain, pruritus, or sudden growth.

Dermoscopic examination of a porocarcinoma is nonspecific, showing prominent polymorphous vessels in a white irregular network which is thought to represent neovascularization common to many neoplasms.

Histopathologic examination is required for definitive diagnosis of porocarcinoma and immunohistochemical analysis may also be necessary. Histopathology of porocarcinoma reveals irregular cords and lobules of polygonal basaloid tumor cells that proliferate within the dermis in an asymmetric fashion. Duct-like structures may be present, but are typically absent in poorly differentiated tumors. These duct-like structures, when present, express carcinoembryonic antigen (CEA) and epithelial membrane antigen (EMA) by immunohistochemistry. Cytokeratin 19 (CK19) has also been reported to be expressed both in these duct-like structures and as well in about 30% of porocarcinomas, which may be helpful in the histopathologic diagnosis of poorly differentiated tumors (Figure 3).

The majority of porocarcinomas demonstrate invasion deep into the reticular dermis and often the subcutaneous tissue. These tumors are composed of lobules of varying size and shape with an infiltrative growth pattern. Cytologic and nuclear pleomorphism as well as mitoses are usually present, although these may only be focal. Some cases have also reported melanocyte colonization within the tumor which reflects a pigmented variant clinically. Necrosis en-masse and comedonecrosis within the tumor has been reported in up to 64% of lesions. The surrounding stroma is usually scant and may be fibrotic, myxoid, mucinous, or hyalinized.

It is also important to note that since porocarcinoma is thought to arise either de novo or by malignant degeneration of a benign poroma, residual foci of benign poroma may be present histologically. While both poroma and porocarcinoma usually express p53, they may be differentiated by immunohistochemistry with p16, as porocarcinoma express this tumor marker and poromas do not.

Porocarcinoma is the most prevalent of the malignant eccrine tumors but, since it is still a relatively rare tumor, accurate data on its incidence is difficult to obtain, though it is estimated to be 0.005% of all malignant epithelial neoplasms. Porocarcinomas typically present in the elderly population with a reported average age of 73 years. Most studies do not show a difference in the incidence of porocarcinoma between genders or among races. There have been isolated case reports of porocarcinomas presenting in association with site of trauma, occupational radiation exposure, and lymphedema.

The exact etiology of porocarcinoma is unknown, but like the benign poroma, it is known to arise from the acrosyringium.

It is believed to either arise de novo or by malignant degeneration of a longstanding poroma. One study quoted 18% of porocarcinoma arise from poroma, while others claim 30-50%.

The diagnosis of porocarcinoma has a poor prognosis, since local recurrence and metastasis is common. Local recurrence is observed in about 20% of excised porocarcinoma lesions; this appears to be more common when the tumor margins exhibit an infiltrative pattern histologically.

Lymph node metastasis is found in 20% of newly diagnosed porocarcinomas and is associated with a mortality of 67%. Solid organ metastasis, including liver, lung, and bone, is seen in 10%.

Recent studies have attempted to define specific clinical and histologic factors that may predict a poor prognosis. These factors include the presence of epidermotropism, lympho-vascular invasion, perineural invasion, lymph node involvement, tumor depth greater that 7 mm, and number of mitoses greater than 14 per high-power field. In contrast to melanoma, the presence of tumor infiltrating lymphocytes does not appear to be a prognostic indicator for porocarcinoma.

While many treatment modalities, including electrocautery, electrofulgaration, radiation therapy, locoregional chemotherapy, and isotretinoin (1-3 mg/kg/day for up to 10 months often in combination with other chemotherapy), have been used for primary porocarcinoma, most authors agree that complete excision with clear margins is necessary in controlling the progression of disease.

Wide local excision has been documented to be 70-80% curative in treating porocarcinoma. The necessary surgical margins have not been defined but larger margins are recommended if an infiltrative tumor margin is present histologically. Due to the high incidence of local recurrence, Mohs micrographic surgery is becoming the standard of care for surgical excision in order to better define that the margins are clear of tumor, as many studies have shown that multiple stages appear to be necessary. It is also justified to perform sentinel lymph node biopsy in the setting of a primary tumor with a depth greater than 7 mm or with mitotic index greater than 14 per high power field.

In the setting of metastatic disease, there are no standard protocols, but a chemotherapy trial is usually done involving combinations of cyclophosphamide, bleomycin, cisplatin, or 5-fluorouracil. Radiation therapy has also been tried, but is typically reserved for palliative care since tumor response is partial and inconsistent. The response rate for any treatment modality is poor for metastatic disease and the reported survival is between 5 and 24 months from the time of diagnosis.

Porocarcinoma is a challenge to treat. Early detection and definitive surgical excision is the only way to minimize mortality. Close clinical monitoring, including lymph node examination, is necessary, considering the high rate of local recurrence and lymph node metastasis. In the setting of metastatic disease, which has such a poor prognosis, the limited data on treatment options and the risks of each should be discussed in detail with the patient.

While aggressive disease has been reported in association with hematologic malignancy and immunosuppression, the diagnosis of porocarcinoma in these clinical scenarios should alert the managing physician to have a high suspicion for metastasis and strive for complete excision as first-line treatment.

Ackerman, AB, Boer, A. “Histopathologic diagnosis of adnexal epithelial neoplasms”. 2008. pp. 172-73. (An atlas and text of benign and malignant neoplasms.)

Sawaya, JL, Khachemoune, A. “Poroma: a review of eccrine, apocrine, and malignant forms”. Int J Dermatol. vol. 52. 2014. pp. 1053-61. (A review of the clinical presentations, histopathologic findings, and treatment options of poroid tumors as well as the differential diagnoses.) 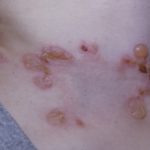