Nevus anemicus (NA) may be present at birth or early childhood and is not hereditary. The lesion should not elicit symptoms.

NA is characterized by well-defined, hypopigmented macules often forming a patch of varying size and shape (Figure 1). The margins are usually irregular and there may or may not be islands of normal skin scattered throughout the nevus with surrounding smaller satellite macules. NA occurs predominantly on the trunk, although lesions on the head, neck, and extremities have been reported. It is slightly paler than the surrounding skin and thus can be easily overlooked on physical examination. It is an asymptomatic lesion. 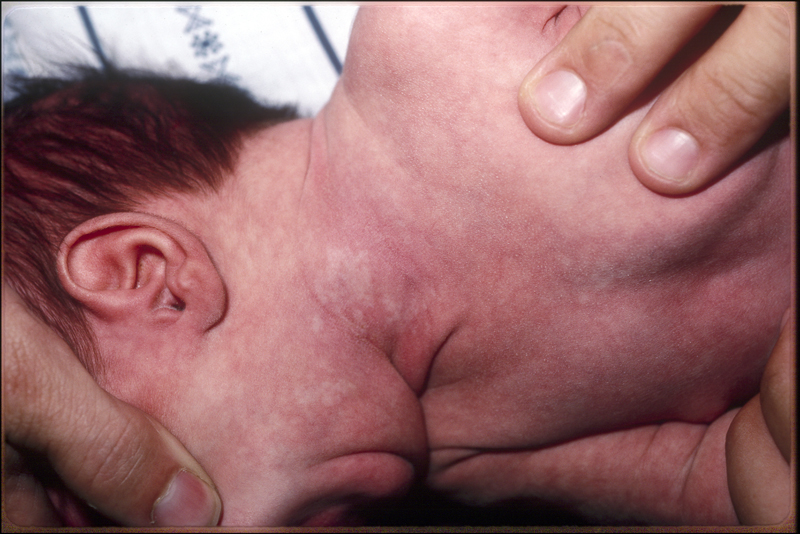 Electron microscopy (EM) findings have mirrored those found on light microscopy. Under Wood’s light examination, NA is not accentuated and becomes indistinguishable from the surrounding normal skin. Diascopy with a glass microscope slide obliterates the border between the NA and normal skin, making the lesion inapparent. Gross sensory response is unaffected with the hypopigmented macule. Friction or heat application fails to induce erythema in the lesion compared to the surrounding normal skin and enhances the nevus.

Firm stroking through lesional and nonlesional skin will elicit the triple response of Lewis in normal skin with an abrupt lack of response in the NA. Only the wheal without a flare may be visible within the confines of the lesion.

There are conditions of hypomelanosis that may mimic NA and should be considered in the differential. NA can most often be differentiated from these conditions via the mechanical methods described above (such as diascopy and Wood’s lamp examination). Histological examination should be infrequently needed and would reveal no abnormality in the pigmentary system.

Nevus depigmentosus is a congenital nonfamilial leukoderma that presents as a white patch at birth, although in fair-skinned infants it may not be noted until later on. It is due to a functional defect of melanocytes demonstrating abnormal melanization with a normal number of melanocytes. Under EM, stubby dendrites representing decreased melanization, decreased melanosomes within keratinocytes, and aggregation of melanosomes in melanocytes are seen. Mechanical stimulation of nevus depigmentosus induces a triple response of Lewis in the lesion, unlike in a NA where no flare occurs with friction. Also, the hypopigmentation of a nevus depigmentosus will be slightly accentuated with Wood’s lamp examination, unlike NA.

Vitiligo consists of a hypopigmented to depigmented macule or patch that can be distinguished from NA via Wood’s lamp examination, which will accentuate vitiligo but not NA. Also, histological examination of vitiligo demonstrates the absence of melanocytes.

The hypomelanotic macules found in tuberous sclerosis are ovoid or leaf-shaped and seen shortly after birth or in early infancy on the trunk and limbs. Under EM, these macules show decreased melanin synthesis and small melanosomes. The use of a Wood’s lamp will accentuate these lesions.

Bier spots represent a benign physiologic vascular anomaly that manifest as transient, small, hypopigmented macules on the upper and lower extremities of young adults. The intervening skin often appears erythematous and will blanch with pressure, making the hypopigmented macules disappear.

The hypopigmented and hyperpigmented patches with scaling and the presence of Malassezia organisms via potassium hydroxide preparation easily distinguishes tinea versicolor from NA. Tinea versicolor commonly presents during puberty and into adulthood on the chest and back.

NA is a rare congenital lesion that may be more common in the female population. It is not hereditary.

NA is a nonmelanotic disorder caused by localized hypersensitive alpha-adrenergic receptor sites of cutaneous arterioles to catecholamines, inducing active vasoconstriction. This was confirmed in a study describing donor dominance of the hypopigmented skin in a transplanted plug of nevus anemic into normal skin. The group confirmed that the vasoconstriction was due to hypersensitive receptors in the cutaneous blood vessels and not due to the previous belief of increased sympathetic stimulation. Phentolamine, an alpha-adrenergic blocking agent was shown in multiple studies to produce erythema in the nevus anemic to the same degree of the surrounding normal skin, demonstrating the enhanced adrenergic tone of the nevus.

In the majority of cases, NA is an isolated skin finding; however, associations with neurofibromatosis and vascular malformations such as port-wine stains have been described. NA and port-wine stains in the same individual have been explained by the theory of “twin-spotting”, resulting from somatic recombination. NA may coexist with pigmentary nevi as part of phakomatosis pigmentovascularis type II, III, or IV.

There are no recommended treatment options, as nevus anemic is benign, asymptomatic, and subtle. Cosmetic make-up can make the nevus more aesthetically pleasing when needed.

NA is a benign congenital nevus; treatment is geared towards aesthetics.

There is no current indication for treatment of nevus anemicus, as it is a benign congenital lesion.

Although usually unassociated with any anomaly, NA may be appreciated in patients with neurofibromatosis and may coexist with pigmentary nevi as part of phakomatosis pigmentovascularis type II, III, or IV.

Daniel, RH, Hubler, WR, Wolf, JE, Holder, WR. “Nevus anemicus. Donor-dominant defect”. Arch Dermatol. vol. 113. 1977. pp. 53-6. (A case report of one patient with NA and a thorough literature review. Various aspects of the nevus were investigated such as histology, pharmacology and exchange transplant study that demonstrated donor dominance. This study also showed that erythema was produced in the NA with alpha-blockers.)

Fleisher, TL, Zeligman, I. “Nevus anemicus”. Arch Dermatol. vol. 100. 1969. pp. 750-5. (Two patients with Neurofibromatosis-1 and NA were studied. Physical and pharmacological stimulation as well as histologic studies were conducted on the areas of NA as well as normal skin and compared.)

Butterworth, T, Walters, JD. “Observations on the pharmacologic responses of Voerner’s nevus anemic”. AMA Arch Derm Syphilol. vol. 66. 1952. pp. 333-9. (This study investigated the properties of NA that included physical stimulation of the NA and pharmacological stimulation using methacholine, pilocarpine, and epinephrine. The probable pathophysiology of the nevus was discussed.) 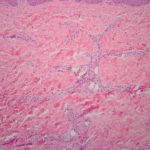