Mucinous carcinoma is most frequently seen in the periobital area. It is a rare, slow growing, malignant tumor that arises from the deepest portion of the eccrine sweat duct. Lesions most commonly are slow growing, solitary, and asymptomatic.

The color of the lesions varies from yellow- tan to red, grey and even blue. The overlying skin sometimes appears translucent due to distention. Lesions are generally exophytic nodules but reports have also described variations such as pedunculated, crusted and fungating. The most frequent sites of primary cutaneous mucinous carcinoma are: eyelid 38%, other facial locations 20.3%, scalp 16%, axilla 10%.

A biopsy of a suspected lesion will have the following characteristics. Mucinous carcinomas are wider in the deep dermis than on the epidermal surface and can extend into the subcutis. The tumor islands appear suspended in a sea of pale-staining mucin. The clustered epithelial cells are small with uniform, somewhat hyperchromatic, cuboidal nuclei. Mitotic figures are rare. The islands of are typically in clusters and form tubules, but cribriform areas may also be noted (Figure 1, Figure 2, Figure 3, Figure 4, Figure 5).

Staining characteristics of mucinous eccrine carcinoma are listed below.

Estrogen receptor (ER) and Progesterone receptor (PR) + has been reported

With respect to differentiating between primary cutaneous mucinous carcinoma and other sweat gland carcinomas, in most other tumors, mucin is present within the epithelial islands. In mucinous carcinoma, the islands float in a sea of sialomucin, a nonsulfated mucoprotein with acid and neutral moieties. This sialomucin is sialidase labile.

The distinction between primary cutaneous mucinous carcinoma and adenocarcinoma is difficult to make on biopsy. Although there are some subtle differences, such as CDX2 or CK20 staining in metastatic gut carcinoma, clinical correlation and testing for possible primary tumors should be considered in every patient.

There has not been a risk factor identified for primary cutaneous mucinous carcinoma other than reports of preceding trauma in a few case reports. The median age of onset is 63 years and there is a male predominance of 2:1. Ethnic distribution is 62% white, 32% African-American and 4% Asian.

Primary cutaneous mucinous carcinoma is a rare malignancy of the eccrine sweat duct. Specific carcinogenic factors for the malignant transformation have not been identified nor does there seem to be a familial component for this rare tumor.

Due to the rarity of primary cutaneous mucinous carcinoma (less than 130 cases have been reported to date) and potential misdiagnosis of metastatic adenocarcinoma, all patients should undergo a work-up to rule out the possibility of a primary adenocarcinoma at a separate location that became metastatic (breast, colon, prostate, lung, salivary glands, ovaries, pancreas, and kidney). Since the periorbital, face and scalp are the most typical locations of primary mucinous eccrine carcinoma, if lesions are elsewhere this would increase the index of suspicion for a possible metastatic etiology.

A complete skin examination should be done including a lymph node exam to rule out metastatic lesions from the initial site of primary cutaneous mucinous carcinoma, as well as lymph node metastasis.

The only treatment effective for primary mucinous eccrine carcinoma is surgical removal. This can be done with standard excision using a margin of 1 cm if possible; alternatively, Mohs micrographic surgery has been used to treat this malignancy. Immunoperoxidase-guided Mohs micrographic surgery, with the additional use of the immunoperoxidase stain low-molecular-weight cytokeratin , has been reported. This could enhance the sensitivity for detection of mucinous carcinoma, and may help contribute to complete tumor removal. Radiation and chemotherapy have not been effective in the treatment of mucinous eccrine carcinoma.

Complete removal of the lesion with a clear margin is the only recommended treatment for primary mucinous eccrine carcinoma.

Due to the rarity of primary cutaneous mucinous carcinoma (less than 130 cases have been reported to date) and potential misdiagnosis of metastatic adenocarcinoma, all patients should undergo a work-up to rule out the possiblity of a primary adenocarcinoma at a separate location that became metastatic (breast, colon, prostate, lung, salivary glands, ovaries, pancreas, and kidney). Since the periorbital region, face, and scalp are the most typical locations of primary mucinous eccrine carcinoma, if lesions are observed elsewhere, the index of suspicion for possible metastatic etiology should be increased. 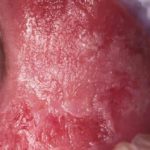