The onset of a morbilliform eruption (MDE; also known as exanthematous or maculopapular drug eruption) typically occurs within 7 to 10 days after the initiation of the culprit drug. Occasionally a 14-day window has been noted. On rechallenge with a drug that the patient has been sensitized to in the past, the eruption may occur within 24 hours.

Initially, there are erythematous blanching macules and papules, which may coalesce to form larger macules and plaques. The term “morbilliform” connotes a measles-like: the rash of measles is classically described as having macules that are 3 to 4 mm in size that coalesce. MDE is usually itchy.

The eruption usually begins on the trunk and upper extremities and progresses caudally. It is usually symmetric. Confluence and severity is worst in dependent areas, such as the back in hospitalized patients (Figure 1). The face may be involved, but mucous membranes are typically spared. Petechiae and macular purpura may be seen on the legs. This occurs secondary to hemostatic pressure that is typically maximal on the legs.

As MDE resolves, it begins to look dusky and violaceous. A targetoid appearance to plaques and macules may be noted at this stage. A postinflammatory fine desquamation may also be seen.

The diagnosis is made based on the typical clinical appearance in concert with an appropriate drug history and the absence of systemic involvement. In typical cases, a biopsy is not required. However, histopathologic specimens that are performed in cases where a differential diagnosis exists will show epidermal changes, including small areas of spongiosis, which may or may not arise above areas of vacuolar change of the basal layer. A few apoptotic keratinocytes and focal parakeratosis may be found.

In the dermis, there is a lymphocytic infiltrate with eosinophils. There may be vascular dilatation and mild edema in the upper dermis. In a recent series, eosinophils were seen in 50% of cases, and an interface dermatitis in 53%.

The following conditions should be considered in the differential diagnosis:

Viral exanthems. The history of upper respiratory tract symptoms and the presence of a lymphocytosis or lymhopenia on the white blood cell differential count (as opposed to an eosinophilia) point one towards a viral etiology.

Toxin-mediated erythemas, such as toxic shock syndrome and Strep toxic shock-like syndrome may present with an eruption that resembles MDE. These patients are typically sicker, with a high fever, and hypotension.

Acute graft-versus host-disease (GVHD). This diagnosis is made in the setting of a recent bone marrow or stem cell transplant and in the absence of a drug culprit. Often, however, these patients have been on multiple drugs, which complicate the clinical picture. The presence of symptoms and signs that suggest GVHD, such as diarrhea, and liver function abnormalities should be looked for. Skin biopsy may be helpful in that acute GVHD may manifest satellite cell necrosis. However, this is not always seen.

Stevens-Johnson syndrome (SJS)/toxic epidermal necrolysis (TEN). The initial lesions of SJS and TEN are described as purpuric or necrotic macules and targetoid lesions. These patients are normally systemically ill with a fever. Skin pain is a feature, as opposed to itch that accompanies MDE. Occasionally, duskiness may be seen in the resolving phases of MDE- here, the areas are not tender.

Scarlet fever. A sandpaper-like eruption accompanies a sore throat and fever. Antibiotics against group A Streptococcus should be administered. Scarlatiniform eruptions, such as Kawasaki syndrome should also be considered. In these patients, a prolonged fever accompanies the rash, cervical lymphadenopathy, oral mucous membrane involvement and/or conjunctival injection.

A multitude of drugs have been implicated in MDE. Antibiotics (most commonly beta-lactams, sulphonamides, quinolones), anticonvulsants (phenytion, cabamazepine, lamotrigine), non-steroidal anti-inflammatory drugs (NSAIDs) and allopurinol are common culprits. Antiretroviral agents, such as the protease inhibitors, emtricitabine and tenofovir, and tealprevir for hepatitis C infection have also been reported to induce MDE.

MDE has been classified both as type IVb and type IVc. In type IVc hypersensitivity, Langerhans cells present drug happens to cytotoxic CD8+ cells, which then initiate apoptosis of keratinocytes via perforin/granzyme B and Fas/Fas ligand pathways. Eosinophil-rich MDE have been classed as type IVb reactions. Here Th 2 cells secrete interleukins 4, 13 and 5, which call eosinophils into the infiltrate, amongst other functions.

Patients may develop a peripheral eosinophilia in concert with MDE. Other than this, systemic involvement is not a feature. The diagnosis of drug rash with eosinophilia and systemic symptoms (DRESS) should be ruled out in patients with a high fever, or with facial edema or lymphadenopathy.

The offending agent should be discontinued if possible. In cases where it is not possible to do this, such as an antibiotic that is crucial to a drug regimen, symptomatic and supportive treatment while continuing the drug therapy is a feasible option.

Mid- or high potency topical steroids (such as triamcinolone acetonide 0.1%, fluocinonide 0.05%, bethamethasone diproprionate 0.05% or clobetasol 0.05%) may help to relieve pruritus. Creams or lotions are useful for large surface areas. Lower potency topical steroids, such as hydrocortisone 2.5% or desonide 0.05%, can be given for the face and folds. Antihistamines are also useful when itch is severe.

An in-depth history and a drug chart may be required to assist in identification of the offending drug. The patient and family should be aware that this is a lifelong reaction and that it will recur with the same drug, or with a drug of the same structural class.

In cases where the offending drug is not able to be discontinued, a discussion should be held regarding the risks and benefits of this, both with the dermatologist and the primary subspecialty team concerned. Here, the rash will get worse before it ultimately gets better and resolves. The patient should be made aware that pruritus and erythema may be severe. Topical steroids and antihistamines will be required in these cases.

Patients should be cautioned not to use strong topical steroids on the face or in the folds. The eruption usually resolves within 7 to 14 days.

An uncommon finding is the development of erythroderma in patients in whom the offending drug is not stopped. Here, consultation with subspecialty teams is needed to assist in complex medication decisions. Oral corticosteroids at a dose of 0.5mg/kg/d may be introduced in these patients, if not contraindicated by their underlying illnesses. 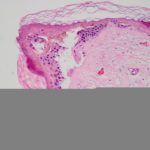