Microcystic adnexal carcinoma (MAC) is a rare cutaneous tumor. It is classified as a low-grade sweat gland carcinoma. MAC is a slow-growing but locally aggressive tumor. Morbidity can be high due to the deep infiltrative nature of the lesion.

MACs are usually flesh-colored or pink-hued firm plaques or nodules (Figure 1, Figure 2). The lesion is a deep-seated tumor that sometimes spares the epidermis; thus the surface is generally smooth. The average clinical appearance of the lesions measures 2 cm; however, the resulting defect after full removal is often many times larger than the tumor appears clinically. There have been reports of more cystic-appearing lesions and lesions with surface changes such as hyperkeratosis.

The most common scenario is slow growth of a relatively indolent lesion over a few years. Because of the deep infiltrating potential of MAC, invasion into blood vessels, bone, cartilage and nerve can occur. When this occurs symptoms of weakness, pain and parasthesias can be present.

Diagnosis is confirmed by biopsy. Because the bulk of the tumor is deep dermal in most cases, a superficial biopsy can often lead to an incorrect diagnosis. A deep punch biopsy is helpful, but an incisional biopsy, when possible, is recommend

MAC is a deeply infiltrative, poorly circumscribed asymmetric tumor surrounded by a desmoplastic stroma (Figure 3). There is often a zone of separation between the tumor and the epidermis; this is a key feature in distinguishing from other tumors such as a benign syringoma. There are areas, However, In rare cases there are areas that show a connection to the epidermis and hair follicles.

There is some difference between the histology in the more superficial portions of the tumor compared to the deeper portions. In the more superficial areas, the tumor has been noted to resemble pilar structures. as small keratinizing cysts are seen lined by a squamous epithelium. Within the cysts there can be keratin pearl formation. In this area, mitoses and atypia are rare. Amongst the cysts there are often nests of basaloid or squamoid cells, some of which can demonstrate central lumen formation and resemble the shape of a tadpole.

–Toludine blue- can highlight tumor strands with a dark pink halo and can also highlight perineural invasion. This stain can be used also on frozen section specimens during Mohs micrographic surgery tissue preparation

–Immunostain p63 shows a characteristic peripheral staining pattern in deeper portion of the tumor and can be used to confirm a diagnosis of MAC.

–Immunostain CK15 stains MAC and desmoplastic trichoepithelioma but does not stain infiltrative BCC and SCC, thus can be used when there is confusion between MAC and possible sqamous cell carcinoma (SCC)/basal cell carcinoma (BCC).

–Immunostain CD5 stains MAC 70% of the time, especially in deeper portions, but does not stain desmoplastic trichoepithelioma or morpheaform basal cell carcinoma.

Other stains such as BerEP4 and CK20 have been studied but are not as helpful as the above listed special stains.

MAC can be confused (clinically and histologically) with the following lesions:

–Syringoma (especially if too superficial of a biopsy is done

–Cutaneous metastasis from breast or other adenocarcinomas (firm dermal nodule)

There have only been approximately 300 cases of MAC reported since the first reports in the early 1980s, thus. epidemiologic data is limited.

The median age for developing MAC is between 40-60 years of age. To date there have been two reported cases of congenital MACs There has been a report of a young girl with MAC on the arm at age 10, which was first noted to be present at age 6. Likewise there have been reports of MAC in patients in their 80s and 90s.

The sum total of all cases seems to have an equal sex distribution. However certain case series show a predominant male or female population.

The majority of cases are in Caucasians. There have been less than 10 cases reported in African-American patients and some of these cases have been in atypical (non-sun exposed) areas. There was a report in 2002 reviewing 51 cases in Japanese patients.

MAC typically is seen in the head and neck areas. There seems to be a predilection for the central face, especially the lip and nasolabial area. In the US, a left-sided facial predominance has been theoretically linked to increased sun exposure through car windows. When multiple lesions are seen in one patient and when ethnic groups other than Caucasian patients are seen, there is a higher chance of lesions being diagnosed outside of the typical facial location.

Three risk factors have been identified for forming MAC: ultraviolet (UV) radiation, therapeutic radiation, and immunosuppressive drugs. In various case studies, the link to therapeutic radiation ranges from 19-50%, with an average latent period of 30-40 years. UV radiation is implicated because of the predominance of lesions in sun exposed areas and higher likelihood in fair skin patients.

There have been two case reports of MAC developing after renal transplantation. One of the patients had received prior radiation for acne.

There has been debate about the cell of origin of MAC. The most recent evidence supports the relationship between hair follicles and apocrine glands and the MAC cell of origin is most likely related to follicular, apocrine and even sebaceous glands. However, there are some reports that suggest that eccrine glands are the predominant cell of origin due the appearance of eccrine differentiation in the tumor.

There is a single report showing a gene deletion on arm 6q and one case of tumors in siblings. More studies will need to be done to confirm a genetic role.

The depth of tumor invasion and destruction of surrounding bone, cartilage, and nerves can be surprising in MAC. The patient should be examined to note any pain, numbness or movement irregularities in the area of the tumor. Metastatic disease is rare and if it occurs is most likely to occur along neurovascular bundles. This is a particular concern for the surgeon removing the tumor as attention to nerves surrounding the tumor is essential for full removal. Three cases of distant metastasis have been reported and one death had been attributed to MAC metastasis to the mediastinum.

Surgical excision of the tumor is recommended for treatment of MAC. Radiation and chemotherapy have not been shown to be effective. Furthermore, radiation is cited as a potential risk factor for developing MAC.

Since tumor extension is reported as 4-6 times the size of the clinical appearance of the lesion, standard surgical margins are not able to be used. Mohs micrographic surgery has been proven to be both an effective way of at least reducing the number of times a patient needs to return to the office to clear the patient of histologic findings and also of reducing the recurrence risk.

Due to the small numbers of cases available and the need for further follow-up time, the range of recurrence in studies of patients treated with Mohs micrographic surgery has been reported between 0-12% (most closer to the 10% figure). The recurrence rate with standard surgical excision has been reported between 30-70%. Unfortunately, there was no mention in the studies of the surgical margin used in these reports. The average postsurgical defect for MAC is four times the size of the clinical lesion, which suggests that often times a wider surgical margin such as 1 cm or greater would be necessary to clear even small tumors.

Most important is complete removal of the tumor. It seems that if the tumor is completely histologically removed, including any involved bone, cartilage, muscle, and nerve, the recurrence rate is equally low regardless of removal after one excision, multiple excisions, or multiple stages of Mohs micrographic surgery. Interestingly, bone invasion and local destruction alone do not predict a poor prognosis as long as the affected areas can be fully surgically removed.

The suggestion has been made to send an additional stage, after seeing clearance with Mohs micrographic surgery, for permanent paraffin sections to confirm clearance of the tumor. This suggestion is based in the fact that frozen section interpretation of MAC can be difficult. See above section on staining for recommendations of additional stains that can be used to make visualization better on frozen sections and H&E.

While MAC tumors grow in a contiguous manner, the tumor clusters become smaller as the tumor penetrates into the deep dermis and adipose tissue. This can give the illusion of skip areas (noncontiguous growth), while close inspection and multiple sections will reveal thin tumor strands connecting the islands in the sclerotic stroma. This architecture can make detection on frozen and even permanent sections difficult.

The optimal therapeutic approach for any patient suspected of MAC is to first establish the proper diagnosis by doing a deep biopsy and obtaining consultation with a pathologist familiar with even rare cutaneous tumors.

Once the diagnosis of MAC is established, Mohs micrographic surgery is the recommended surgical treatment for complete removal. Since the tumors may be very large and deep, a treatment center should be chosen that can handle complex cases and repairs. Most Mohs surgeons would prefer to have the capability of plastic surgery, ENT and ophthalmology surgery consultation if needed for tumor removal and repair. Furthermore, the need for a full operating room and anesthesia may be needed.

A computed tomography (CT) scan or magnetic resonance imaging (MRI) prior to surgery in cases suspected to have deep invasion may help define the tumor margins prior to surgery.

Patients and family members need to be counseled about the extent of surgery that may be required for complete removal. The clinical appearance and relative lack of symptoms can be misleading. Patients and family should be prepared to handle the possiblity of deformity and even functional defect in the affected area. Wound care and followup surgery for further removal, closure, revisions are all possibilities as well.

Even with the best clinical scenario for surgical removal and clear margins with removal, the recurrence rate for MAC is as high as 12%.

The patient needs to be monitored with self skin examination and dermatology examination for a lifetime. Any new or suspicious lesions, especially in the treated area. should be removed for biopsy.

CT and MRI scans can be used to assess the size of the primary tumor size and involvement of deep tissues and to evaluate for suspected metastasis in larger and more involved cases. However, CT and MRI are not routinely used for clinical follow-up in the absence of suspected internal involvement.

Due to the difficulty in diagnosis and rarity of MAC, often tumors are misdiagnosed and treated as perhaps a BCC or even a benign tumor such as a syringoma. In those cases, when the tumor recurs it is often assumed to be the same tumor as the initial diagnosis. The clinician, pathologist, and Mohs surgeon needs to keep MAC in the differential diagnosis when presented with recurrent lesions, especially those fitting the description of MAC.

Palamaras, I., McKenna, JD, Robson, A, Barlow, RJ. “Microcystic adnexal carcinoma: A case series treated with Mohs micrographic surgery and identification of patients in whom paraffin sections may be preferable”. Dermatol Surg. vol. 36. 2010. pp. 446-52. (Identification of perineural invasion in MAC and its implications.) 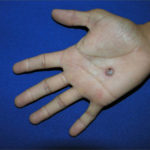