Hailey disease presents as tender erosions that wax and wane in intensity and distribution. Characteristic findings on physical examination include erythematous, moderately well-demarcated and eroded lesions that begin in the groin or axillae but may also present on other parts of the body such as the trunk and limbs (Figure 1). Hot weather, friction in intertriginous sites, and secondary impetiginization often prompt individuals to seek medical attention.

Men and women are affected equally. Individuals that are overweight, work in a hot or humid environment, or are subject to repetitive friction (e.g., long-distance runners, triathlon enthusiasts, etc) are at greatest risk for developing lesions. Patients often present by the late teenage years, and most patients have been diagnosed by their late 30s.

Haley-Hailey disease is caused by a germline mutation in the ATP2C1 gene (OMIM 604384) on chromosome 3 Q21-Q24, which encodes the human secretory pathway Ca2+/Mn2+-ATPase protein 1. The mutation encodes an ATP-powered calcium channel pump. Calcium is needed for the production of desmosomes and adherens junctions. Changes in calcium gradients are thought to impair tonofilament-desmosomal interactions.

The exact role that these mutations play in the clinical manifestation of Hailey-Hailey disease are not yet clear. One study suggests that oxidative stress of keratinocytes leads to Notch1 and Itch protein downregulation, which alters signaling pathways. Genetic studies have shown that Notch1 signaling may be important in autoimmune disease. Itch binds to an intracellular portion of Notch and can alter this signaling. Further study of the complex cellular interactions involved in this disease is needed.

Patients with Hailey-Hailey live long and productive lives, although they often must battle repetitive and annoying skin lesions. There are no known systemic complications of this disease at this time, although secondary wound infection and colonization with methicillin-resistant staphylococci (MRSA) pose a problem and health threat.

Genetic studies have suggested that the risk of Alzheimer’s disease may be higher in patients with Hailey-Hailey disease, but this association is not yet clear. Widespread lesions may be associated with eczema herpeticum (Kaposi’s varicelliform eruption). Early recognition and early treatment with oral antiviral medication is important in treating these cases. Squamous cell carcinoma may develop in longstanding lesions, as with any long standing wound or ulcer.

Treat secondary infection. Antibiotics used for pyogenic skin infections are most often used. Depending upon the presence of contraindications and other factors, cephalexin, amoxicillin-clavulanate, ciprofloxacin, erythromycin, doxycycline, and other agents may all be of value.

Control inflammation with topical or systemic corticosteroids. For a 70-kg man with no contraindications, we often give intramuscular triamcinolone acetonide 40 mg, or a prednisone taper over 2 weeks with a starting dose of 40 mg. For intertriginous areas, we prescribe topical desonide lotion to be applied 4 times daily for a week and then clinically re-evaluate the patient. Care must be taken to avoid steroid atrophy. Consider topical calcineurin inhibitors such as tacrolimus 0.1% ointment for intermittent therapy. Pimecrolimus as well as other newer agents are likely to be beneficial.

Oral retinoids. A recent report demonstrated improvement with acitretin 25 mg orally. We will treat with a systemic retinoid for 2 or 3 months and then taper and discontinue therapy. Many affected individuals do very well with episodic treatment for flares in their disease.

Oral tacrolimus and injections of botulinum toxin type A has also been reported to be beneficial.

Photodynamic therapy. Reports are mixed, with some reports noting efficacy and others not (20% aminolevulinic acid followed by exposure to an intense continuous wave). Polychromatic incoherent light (590-700 nm at 120 mW/cm2 for 30 minutes) has been reported to be of help.

Biologics. Intramuscular alefacept 15 mg weekly for 12 weeks was been reported to lead to partial response. This drug is now off the market in the United States.

Radiotherapy. Localized areas of involvement in refractory cases can be treated with electron beam radiotherapy (6-8 MeV; 20 Gy in 10 fractions).

Optimal therapy includes identifying and eliminating triggering factors, such as friction and a hot work environment. Biopsy is warranted to establish a definitive diagnosis. Culture for bacterial and fungal organisms should be performed on presentation so that directed treatment can most efficiently control secondary infection.

Topical zinc oxide 10% USP paste is particularly helpful in soothing eroded lesions and minimizing pain from friction. Aqueous gentian violet is a useful vital dye that also soothes lesions and controls both bacterial and fungal infection. Patients with an acute flair can be helped with a short course of oral prednisone or an intramuscular injection of triamcinolone acetonide. Care must be given to avoid concurrent health problems that may be a contraindication to systemic corticosteroid therapy. Once the disease is under control, occasional and intermittent mid-potency corticosteroids can control minor flares and sustain remissions.

Topical 5-fluorouracil (FU) cream at 5% applied 3 times weekly for 3 months followed by once weekly application for 3 months has been beneficial in a limited number of patients.

Surgical options are a last resort and should be avoided in most cases. Consultation with an experienced dermatologist is advised prior to the initiation of surgical modalities. Treatment of select lesions with the carbon dioxide laser can be helpful.

Surgical methods such as dermabrasion have also been tried with variable efficacy. Other options include electron beam radiotherapy or a trial of alefacept. Photodynamic therapy is reported to give variable results.

Individuals with Hailey-Hailey disease should have genetic counseling for themselves and family members. This is most important for all women of childbearing age.

Follow-up depends upon treatment response. We typically encourage a follow up visit at 1 week, and then monthly for the next 3 months if the patient is responding to therapy. Patients showing an optimal response return annually for a follow-up examination. Many patients can control disease with avoidance of triggers, regular use of zine oxide paste, control of secondary infection via topical means, and occasional use of topical mid-potency corticosteroids.

Patients may find systemic corticosteroids a successful treatment approach. Unfortunately, because there is no known cure at this time, the long-term use of corticosteroids is a pitfall that can be associated with many secondary complications. We counsel patients about this and warn other practitioners who may unwittingly also prescribe systemic therapy for our patients.

Another unusual clinical scenario is the development of concurrent herpes virus infection (eczema herpeticum). Patients with extensive skin involvement with Hailey-Hailey disease may develop a flare with associated vesicles and bullae. Clinicians should consider the possibility of eczema herpeticum in such cases and confirm the diagnosis with a Tzanck preparation, skin biopsy, or culture, and institute prompt antiviral therapy.

Another diagnostic difficulty is the rare occurrence of segmental Hailey-Hailey disease. Patients may have lesions that are limited in distribution. This unusual presentation may delay diagnosis.

Squamous cell carcinoma has been reported in a patient with Hailey-Hailey disease treated with tacrolimus. Any persistent, unusual, or refractory lesion should raise the suspicion of a concurrent problem. Associated squamous cell carcinoma as well as other entities such as extramammary Paget’s disease can mimic Hailey-Hailey disease. Biopsy should be considered in such cases. 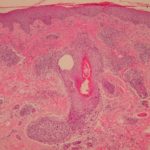