There are no salient clinical features specific for fibrosarcoma. Most patients lack constitutional symptoms; however, those with larger tumors or those with metastatic disease may have weight loss. The pediatric variant, infantile fibrosarcoma, also presents as a painless mass of variable dimensions. Some masses are present at birth, whereas most become evident during the first year of life.

Patients will usually present with a painless mass. It may affect all aspects of the body, but has a predilection for the deep soft tissues of the lower extremities, followed by the upper extremities and trunk. Adult fibrosarcoma usually presents as a slow-growing mass, and may be present for a few weeks to years (Figure 1). 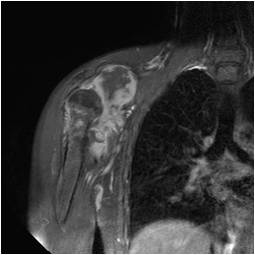 Unlike the adult form, infantile fibrosarcoma presents as a rapidly growing painless mass.

In adults, fibrosarcoma accounts for approximately 1%-3% of all soft tissue sarcomas. While once very prevalent, with an incidence of 65% in 1936, the incidence of fibrosarcoma has declined significantly. This can be attributed to a change in categorization by pathologists, enhanced histologic criteria, improved staining techniques, cytogenetics, and molecular genetics.

Fibrosarcoma usually affects middle-aged and older adults, specifically those aged 30-55 years of age. There is a slight male predominance. The current 5-year survival rate of 36% has been shown to negatively correlate with increasing tumor grade and inadequate surgical margins. The rate of local recurrence is increased in patients with inadequate surgical margins. The rate of metastasis is increased with increased grade and stage, however it is not associated with surgical margins. Sites of metastasis include the lung, followed by the skeleton.

Infantile fibrosarcoma is characterized by t(12;15)(p13;q25) translocation and the fusion of ETV6 gene with neurotrophin-3 receptor (NTRK3). Infantile fibrosarcoma demonstrates a gain of chromosomes 8,11,17, and 20. The infantile form has a better prognosis than the adult form, with survival rates of 89%-100%. Incidence of metastases is less than 10% in children younger than 5 years of age, and increases to greater than 50% when the patient presents beyond 10 years of age.

In general, there are no patient populations specifically at risk for development of fibrosarcoma. Genetic factors may predispose to the development of sarcoma, e.g. Li-Fraumeni syndrome.

The etiology of fibrosarcoma, like most soft tissue sarcomas, is unknown. Most arise sporadically.

In the adult form, there has been an association with trauma, chronic draining sinuses (i.e. draining osteomyelitis), areas where prosthetic vascular grafts have been placed, and in the vicinity of knee arthroplasty. The fibrous intra/intermuscular structures, fascia, tendons, and aponeurosis usually serve as the origin of fibrosarcoma. It may affect all aspects of the body but has a predilection for the deep soft tissues of the lower extremities, followed by the upper extremities and trunk.

There are no systemic disorders that are currently associated with the diagnosis of fibrosarcoma.

Chemotherapy is usually reserved for patients with metastatic disease. There is a suggested role of pre-operative chemotherapy in infants, specifically with vincristine, actinomycin-D, and cyclophosphamide at 3-month intervals, especially in cases where amputation is required.

It has been suggested that the rate of local recurrence and overall survival may be improved with a multimodal approach that includes preoperative chemotherapy and radiation therapy, followed by local control and postoperative adjuvant chemotherapy or surgery and post-operative radiation.

Chemotherapy can be offered to treat the primary tumor, in conjunction with radiation, depending on grade (high), or size (>8cm) of tumor, and depending on individual institutional protocol. Chemotherapy may be considered if limb salvage (especially upper extremity) is in jeopardy, or in difficult-to-resect locations (pelvis, axial skeleton). Chemotherapy options may be limited because of patient’s comorbidities (e.g. advanced age, cardiac/lung disease), precluding the use of more effective/toxic chemotherapeutic agents.

There is an increased risk of second primary cancers in long-term survivors of sarcoma.

After appropriate treatment, patients should be managed in accordance to the most recent National Comprehensive Cancer Network guidelines (NCCN). Surveillance is based on staging at the time of diagnosis. According to 2007 NCCN guidelines, after primary therapy, patients with stage I-III should be evaluated every 3-6 months, for 2 years, with a history and physical exam, chest imaging, and periodic imaging of the extremity affected. After 2 years, patients should be followed yearly with the same clinical evaluation.

There have also been case reports of Paget’s disease of bone with malignant degeneration to sarcoma in 0.9%-2% of cases, with osteosarcoma accounting for 50% of cases, but fibrosarcoma was also reported.

Radiation (as mentioned in Optimal Therapeutic Approach above), can predispose to sarcomatous degeneration of the treated field; incidence increases with dose received.

Weiss, SW, Goldblum, JR. “Enzinger and Weiss's soft tissue tumors”. 2008. pp. 257-370. (A comprehensive review of fibrous tumors of childhood, and fibrosarcoma specifically. The focus is on pathologic diagnosis and presentation, with brief discussions on management.)

2007. (Provides guidelines regarding treatment and surveillance of patients with soft tissue sarcoma.)

Kurkchubasche, AG, Halvorson, ER, Forman, EN, Terek, RM, Ferguson, WS. “The role of preoperative chemotherapy in the treatment of infantile fibrosarcoma”. J Pediatr Surg. vol. 35. 2000. pp. 880-3. (This is a case series of two patients, treated with preoperative chemotherapy in an attempt to avoid an amputation that would have been warranted. The patients were treated with a vincristine, actinomycin-D and cyclophosphamide regimen, given at 3-month intervals over a 9-month period of time.)

Fechner, RE, Mills, SE. ” Tumors of the bones and joints; Fascicle 8, Third Series”. 1992. pp. 17-23. (This is a concise summary of tumors of bones and joints, benign and malignant, detailing the tumor definition, general and clinical features, sites, radiographic appearance, gross and microscopic findings, and treatment and prognosis, based on case series at the AFIP, as well as other institutions. The chapter “Sarcomas Arising in Benign Neoplasms or Non-Neoplastic Conditions” outlines unusual scenarios of sarcomas arising in benign conditions.) 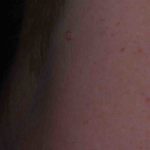