Dowling-Degos disease is characterized by asymptomatic, symmetrical hyperpigmentation that arises most commonly in the axillae and groin, but occasionally in the intergluteal or inframammary creases, genitalia, scalp, neck, and arms. The pigmentary changes are initially noted to be small round hyperpigmented macules and, less commonly, flat papules. Over time, the macules become more numerous and a reticulate configuration develops. Comedones and pitted scars may be noted, particularly around the mouth (Figure 1).

Diagnosis is confirmed by routine skin biopsy, which reveals diagnostic skin findings. These features include

–Irregular acanthosis of the rete ridges

Other diagnoses to consider include

Haber syndrome – rare syndrome characterized by a rosacea-like dermatitis along with hyperpigmented, hyperkeratotic papules in the axilla and neck, and pitted scars

Neurofibromatosis, type I – neurocutaneous syndrome of which axillary freckling (Crowe’s sign) is a major feature. The pigmentation is very similar to early changes of Dowling-Degos disease but it never gets as confluent or reticulated.

Dowling-Degos disease is a rare autosomal-dominant disorder that affects men and women equally. The pigmentation arises in the second or third decade of life.

Dowling-Degos disease is a familial disorder that is believed to be caused by loss of function mutations in the keratin 5 gene (KRT5). These mutations lead to abnormal epidermal growth and impaired melanin transfer.

Dowling-Degos disease has been associated with hidradenitis suppurativa, severe acne, and other components of the follicular occlusion tetrad. There are no systemic implications of this disorder. The disease may be complicated by furuncular lesions in the creases. There are rare reports of squamous cell carcinoma arising in the perianal area in patients with this disease. Rosacea-like changes may indicate the patient has Haber’s syndrome, a disorder that overlaps with Dowling-Degos disease.

–Laser: The only reported laser to date to work has been the Er:YAG, though other lasers such as the carbon dioxide laser would theoretically be considered as well.

Observation and reassurance is the best approach to this disease. None of the medical treatment options above have been shown to help, although results may vary from patient to patient. The relative safety of the topical agents may lead to a therapeutic trial of one or more of them for 2 to 3 months to the affected area. The Erbium:YAG laser has been utilized to reduce the hyperpigmentation in a limited number of patients. Evaluation for concomitant hidradenitis suppurativa is recommended.

Patients with Dowling-Degos disease should have a discussion regarding the benign nature of the disease, the genetic implications, and the lack of available treatments. Routine follow-up or monitoring is not necessary, unless the patient develops hidradenitis suppurativa. Erbium:YAG laser therapy is worth considering.

Galli-Galli disease, as mentioned above, is a variant of Dowling-Degos disease that has features of transient acantholytic dermatosis. Histopathologic examination of the eruption reveals the characteristic downward protrusion of digitate rete ridges seen in Dowling-Degos disease along with focal acantholysis such as that typically seen in transient acantholytic dermatosis (Grover’s disease) or benign familial pemphigus (Hailey-Hailey disease).

Although dyskeratosis was identified in the original two cases, it is not an essential finding. These patients also demonstrate the KRT5 gene mutation. On examination, red pruritic papules are found in the areas affected by the hyperpigmentation. The onset of pruritus or red papules in a patient with Dowling-Degos disease may suggest this specific diagnosis.

Batycka-Baran, A, Baran, W, Hryncewicz-Gwozdz, A, Burgdorf, W. “Dowling-Degos disease: case report and review of the literature”. Dermatology. vol. 220. 2010. pp. 254-8. (Case report of one patient with Dowling-Degos. The authors conclude that Dowling-Degos is on a spectrum of morphologically related disorders.)

Liao, H, Zhao, Y, Baty, DU, McGrath, JA, Mellerio, JE, McLean, WH. “A heterozygous frameshift mutation in the V1 domain of keratin 5 in a family with Dowling-Degos disease”. J Invest Dermatol. vol. 127. 2007. pp. 298-300. (A report on the identification of a frameshift mutation in keratin 5 that confirms that haploinsufficiency is responsible for Dowling-Degos disease.) 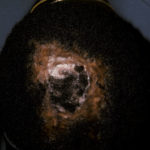