Blau syndrome or early onset sarcoidosis is a rare familial condition that is inherited in autosomal dominant fashion, that presents with the triad of a granulomatous rash, arthritis and uveitis. There have been fewer than 200 cases recorded in the literature. Most patients present with a positive family history although there have been a few cases with spontaneous mutations reported.

Patients tend to present with signs at a median age of 2 years (range 4 weeks to 27 years). The initial manifestation is most frequently a rash. The rash tends to be asymptomatic and tends to be intermittently present with episodes of spontaneous resolution.

Examination reveals discrete pinhead papules often perifollicularly based. The papules may be observed on the face, extremities and trunk. They are yellowish to red brown in color.

Arthritis is symmetric and affects the wrists, knees and ankles most frequently. Uveitis is the most common ocular manifestation and may present with pain, photophobia and blurred vision. Other ocular complications include cataracts and glaucoma. Irreversible sequelae may occur in joints and eyes due to uncurbed chronic inflammation warranting early treatment. Rarely, other systemic features have been described such as recurrent fevers, cranial neuropathies, large vessel vasculitis, and granulomatous inflammation of the liver, kidney, lung, heart and epididymis.

Genetic testing should be performed. The gene mutated in Blau is called NOD2, also known as CARD15. There appears to be almost 100% penetrance, meaning that those individuals with NOD2 mutations will exhibit the disease phenotype.

Sarcoidosis in children rarely presents before the age of 5 years and in the pediatric population is similar to adult sarcoidosis with lung involvement and mediastinal lymphadenopathy, which is not a feature of Blau syndrome.

Children of affected individuals have a 50% chance of inheriting the mutated gene and therefore the clinical phenotype.

The NOD2 protein is part of the NOD family of proteins. These proteins form intracellular pattern recognition molecules that recognize danger signals such as toxins, bacteria or viruses and are an important part of innate immunity. NOD2 specifically recognises muramyl dipeptide that is part of the bacterial cell wall peptidoglycan. When activated NOD2 leads to NF-kappa beta release, which in turn promotes apoptosis.

NOD2 mutations in Blau syndrome affect the nucleotide-binding domain of the protein. This leads to a gain of function that is now independent of muramyl dipeptide concentration, resulting in excessive NF kappa beta activation. Interestingly, susceptibility to Crohn’s disease has also been associated with mutations in NOD2, which shares some phenotypic similarities with Blau such as multisystem granulomatous inflammation. Polymorphisms associated with Crohn’s affect a different region of the NOD2 gene.

Recently, Mycobacterium avium ss. paratuberculosis (MAP) DNA has been identified in affected tissues from Blau patients. This organism has been implicated in the pathogenesis of Crohn’s and has also been found in patients with sarcoidosis. It is possible that NOD2 mutations in Blau could allow the persistence of MAP, leading to aberrant inflammation.

As Blau syndrome is a multisystem inflammatory disorder, a careful review of symptoms should be performed at each assessment. In particular patients must undergo regular opthalmologic assessments as ocular inflammation may initially present asymptomatically.

Medical treatment includes topical corticosteroids and azithromycin for the skin rash, systemic corticosteroids, other immuosuppressants or biologics for systemic inflammation.

Treatment options should be guided by which organs are affected. Empiric experience has guided therapeutic choices as there have been no clinical trials owing to the rarity of Blau syndrome.

Patients should be ideally be managed with a multidisciplinary team approach. This should include pediatric dermatologists, rheumatologists and ophthalmologists. Genetic counseling is also of importance for families affected.

The skin involvement causes relatively little morbidity as compared with joint and ocular manifestations. Patients and their families need to understand that it is critical to have regular clinical reviews (particularly ophthalmologic) to identify early signs of inflammation. Treatment should be directed toward controlling active inflammation rather than prophylaxis.

Although granulomatous inflammation is normally limited to skin, joints and the eyes, there have been isolated reports of other visceral involvement with granulomatous changes seen in the liver, kidney and vasculature. There has been one report of interstitial lung disease and another case of renal failure with associated renal cell carcinoma in Blau patients. Therefore all clinical complaints should be evaluated as potential associations with Blau. 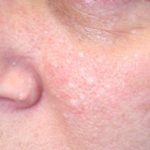