Acute generalized exanthematous pustulosis (AGEP) usually appears abruptly. There is a sudden onset of high fever (usually above 38°C) and a rash. Initially the eruption consists of widespread erythematous and edematous plaques. Within hours to days, numerous tiny, nonfollicular subcorneal pustules appear within the plaques (Figure 1 and Figure 2). The pustules are sterile. The eruption has a predilection for the intertriginous areas in some cases. The rash is variably pruritic. The palms and soles are usually spared. Occasionally, target lesions, purpura or facial edema may be seen. The mucous membranes may be involved in a minority of cases. Such involvement has been reported to be of a nonerosive nature. Internal organs are not involved.

These features are accompanied by a leukocytosis and neutrophilia (usually greater than 7×109/ml). A mild eosinophilia may also be present.

Pustules begin to resolve within days, leaving behind tiny collarettes of scale. Resolution of the eruption is usually complete within 15 days. Mortality has been reported to be 5%: this in patients with underlying comorbidities, or with secondary infections.

The clinical impression of AGEP may be confirmed histopathologically. The histopathologic features of 102 cases of AGEP were recently studied. Sub- and intracorneal as well as intraepidermal pustules were present in 99% of cases. Spongiform features were regularly present in the intraepidermal pustules. Eosinophils were seen within the pustules in around one third of cases.

Other epidermal findings included spongiosis (80% of cases), neutrophil exocytosis (77%) and necrotic keratinocytes (67%). Segments of keratinocyte necrosis were seen in 7%. In the dermis, 88% of cases displayed papillary dermal edema. The vast majority showed a mixed superficial as well as mid- and deep dermal infiltrate. Neutrophils were seen in all cases, and eosinophils in 81% of cases. Follicular pustules were noted in a minority of cases (23%), and vasculitis was absent.

Patch testing after the acute event may be helpful in pinning down the offending drug, in cases that are not so clear cut. Patch tests were positive in 50% in one series of 14 patients. The lymphocyte proliferation test has yielded inconsistent results.

It is important to distinguish AGEP from the following eruptions, which may manifest considerable overlapping features:

If these historical and examination findings are not helpful, or too subtle, histopathologic findings can be of assistance. Both conditions manifest spongiform pustules, but subepidermal edema, the presence of eosinophils and occasional necrotic keratinocytes characterize AGEP, whereas the presence of psoriasiform hyperplasia helps to clinch the diagnosis of pustular psoriasis. A peripheral eosinophilia also provides evidence of AGEP.

Toxic epidermal necrolysis (TEN). There are at least five reported cases of AGEP mimicking TEN. These patients presented with typical signs of AGEP that then progressed to display large bullae and large areas of erosion with or without a positive Nikolsky sign. Some cases manifested targetoid lesions. In these cases, full thickness necrosis, which would be diagnostic of TEN, was not present.

Drug reaction with eosinophilia and systemic symptoms (DRESS). A few cases of DRESS presenting with AGEP-like pustules have been reported. In DRESS, facial edema is more commonly seen. Additionally, the presence of lymphadenopathy, hepatitis, renal dysfunction, or atypical lymphocytes on peripheral smear make the diagnosis of DRESS more likely.

Who is at Risk for Developing Acute Generalized Exanthematous Pustulosis?

The incident rate of AGEP is estimated to be one to five cases per million per year. In adults, the mean age of onset has been noted in various studies to vary from 40 to 56 years of age. AGEP has also been reported in children. While AGEP affects men and women equally, several small studies do show a slight female predominance HLA B51, DR11, and DQ3 have been found to be more common than the general population in patients with AGEP.

What is the Cause of Acute Generalized Exanthematous Pustulosis?

While drugs are the usual cause of AGEP (in more than 90% of cases), it may also be caused by contact sensitivity to mercury for example, or it may be elicited by viral infections.

Antimicrobials, antiepileptic agents, antimalarials, calcium channel blockers, nonsteroidal antiinflammatory drugs (NSAIDS), herbal medications and corticosteroids have all been reported to cause AGEP. In a recent study from Europe, prestinomycin, ampicillin/amoxicillin, quinolones, hydroxychloroquine, anti-infective sulfonamides, terbinafine, and diltiazem were reported to have the strongest association with AGEP. Corticosteroids, macrolides, oxicam NSAIDs, and antiepileptic drugs were also associated.

In general, time to onset of the eruption from the initiation of drug intake is 2 to 3 days (range: 1-5). This was noted to be longer after nonantibiotic drugs, and was reported to be 11 days in one study.

Cases from contact to mercury and to bufexamac (a topical NSAID) have also been reported. The presence of an underlying infection as the inciting factor has been reported in a few studies. Viral infections, such as Coxsackie B4, cytomegalovirus and parvovirus B19, as well as Chlamydia pneumoniae and Escherichia coli infection have been associated. In three cases, a venomous spider bite was also implicated.

In AGEP, the initiating event is the production of interleukin (IL)-8 (recently renamed CXCL8) by drug-specific T cells. The T-cells are of the Th1 subtype, and they also secrete granulocyte-macrophage colony- stimulating factor (GM-CSF), interferon-g (IFNg), and varying levels of tumor necrosis factor-α (TNF- α). CXCL8 activates neutrophils, recruits them and blocks their apoptosis. Neutrophils mediate the inflammatory reaction through release of further IFNg, GM-CSF, IL-5, and RANTES.

It is postulated that TNF- α levels in the subgroup of patients whose clinical presentations show features of TEN as well as AGEP are higher than in uncomplicated cases. This theory is supported by high levels of TNF- α seen in three patients with AGEP/TEN, and in the treatment of these cases with infliximab.

Patients feel systemically unwell owing to the associated high fever. However, internal organ involvement is not a feature. In widespread cases and in debilitated patients, secondary infection may occur.

A comprehensive search as to the cause of AGEP should be undertaken. This should include not only the intake of new medication (up to the last 11 days), but also an inquiry into recent infections or exposures. Potential inciting drugs should be discontinued promptly.

The majority of cases of AGEP resolve spontaneously within a 2-week time period. Treatment can therefore be supportive only. Administering antipyretics is a useful step towards achieving patient comfort. Potent (betamethasone diproprionate 0.05%, or equivalent) or ultrapotent (clobetasol 0.05% or equivalent) topical steroids may also be used. For large surface areas, creams or lotions are advantageous. Antihistamines may also be used for pruritus.

Oral (prednisone 1mg/kg tapered over 2 weeks, prednisolone or methylprednisolone) or intravenous (hydrocortisone) steroids may be given for widespread cases for symptom relief (typically 1mg/kg tapered over 2 weeks). It is vital to rule out a coexistent infection in these patients who have high fevers before embarking on such therapy. In each case, an appraisal of the patient’s concurrent comorbidities and an assessment of the risk/benefit ratio of initiating systemic corticosteroid therapy are vital.

In one study of 16 patients, in which 8 received intravenous corticosteroids (hydrocortisone sodium succinate), 5 received oral steroids (prednisolone or methylprednisolone), 2 topical steroids (unspecified), and 1 received calamine lotion and antihistamines, there was no significant difference between treatment groups regarding the course and duration of the disease or fever.

A single case of AGEP was treated with etanercept, administered subcutaneously twice a week. The initial dose was administered on day 2 of the eruption. Rapid resolution was noted, which was almost complete after 5 days. Etanercept was discontinued after 3 injections.

Hospitalization for purposes of close monitoring of the patient should be recommended to the patient and his or her family. Around-the-clock vital signs and a daily general physical examination should be performed to rule out any concomitant or superimposed infections, and to monitor for progression of the eruption. Close attention should be paid to hydration and fever control. Measures to control itch, such as antihistamines and topical steroid applications, can be offered.

The self-limited nature of the illness should be explained. A discussion regarding therapeutic options should be undertaken. For widespread or severe disease, the option of oral or intravenous corticosteroids can be offered, along with a discussion of the attendant risks

If a drug cause has been identified, the patient should be counseled to avoid this drug in the future, and documentation of the drug name should be given to the patient. In the scenario of the possibility of two or more drugs having been the likely offender, patch testing should be recommended.

It may be challenging in some cases to distinguish AGEP from TEN or DRESS. These patients should be examined and worked up carefully to achieve diagnostic accuracy.

For those patients in whom features of AGEP and TEN overlap, close attention to fluid and electrolyte balance and wound care is important. Bullae may be lanced, though not de-roofed. Vaseline gauze or silver-based dressings may be applied to the denuded areas. Systemic interventions may be considered. A single dose of infliximab (5mg/kg) was given to three patients with overlapping features of AGEP and TEN. This resulted in resolution of the eruptions after 6 to 14 days. A single case of AGEP/TEN was treated with IVIG at a dose of 0.35 g/kg/day for 2 days, then 0.5mg/kg for 4 days. Another such patient was treated with systemic steroids (intravenous hydrocortisone) and IVIG at a dose of 1 g/kg/day for 2 days.

Lateef, A, Tan, KB, Lau, TC. “Acute generalized exanthematous pustulosis and toxic epidermal necrolysis induced by hydroxychloroquine”. Clin Rheumatol. vol. 28. 2009. pp. 1449-52. (The above are 3 cases in which an overlapping picture of AGEP and TEN were seen.) 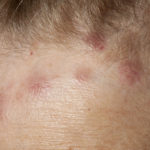