In order to be confident in the diagnosis of a perforating disorder, one must acknowledge the historical ambiguity in classifying these disorders. In the past, these disorders have included elastosis perforans serpiginosum (EPS), reactive perforating collagenosis (RPC, pediatric and adult forms), perforating folliculitis (PF), Kyrle’s disease, perforating disorder of renal disease and other variants. However, the clinical and histologic similarities among the cases associated with diabetes and renal disease outweigh their differences and present a compelling reason to consider them variants of the same disease process. Acquired perforating dermatosis (APD), EPS (see separate chapter) and pediatric RPC are sufficiently different to be considered independent clinical entities.

Acquired perforating dermatosis (APD) is strongly associated with pruritus, chronic renal failure, and/or diabetes mellitus. In the majority of cases, the chronic renal failure necessitating dialysis is due to diabetic nephropathy, although renal disease secondary to hypertension has also been described. Thus, the most important aspects on history are those of diabetes, renal failure, hemodialysis or peritoneal dialysis. A history of pruritus and chronic rubbing/scratching of the lesions is also important. Lesions may develop in scratch marks as a result of Koebner phenomenon and can have a striking linear configuration.

In establishing a diagnosis of a perforating disorder, in addition to the above historic features, it is important to consider the age of onset as reactive perforating collagenosis (RPC) and EPS tend to present in childhood while APD, including adult form of RPC, Kyrle’s disease (KD) and perforating folliculitis (PF) arise in adults. A history of preceding trauma is typical of RPC.

Umbilicated, dome-shaped, 1-10 mm keratotic papules with central keratinous crusts are the clinical hallmarks of all the perforating disorders (Figure 1. Lesions are preferentially localized over the extensor aspects of the arms and legs, but any cutaneous surface may be involved, including, but not limited to, trunk and scalp. Lesions on the conjunctiva and buccal mucosa have been described in a patient with Kyrle’s disease.

If keratotic papules are seen in a periumbilical distribution, particularly in multiparous black women, a diagnosis of perforating periumbilical calcific elastosis (also known as periumbilical pseudoxanthoma elasticum) can be considered. Often, a “crunchy” or “grinding” sound is described during a biopsy of such lesions.

Histologically, the lesions of APD are also similar, each showing invagination of the epidermis around a central plug containing basophilic debris. In RPC, collagen bundles perforate through the epidermis, whereas in perforating folliculits there is follicular perforation and spilling out of follicular contents into the dermis. Occasionally, a hair can be seen and serial sectioning may be necessary to visualize a hair shaft. Patients have also been reported in whom lesions had variably showed the histology of PF, RPC, and KD. Elimination of both collagen and elastin has been documented in a number of cases, providing further support to the concept of a unified diagnosis of “acquired perforating dermatosis.”

Clinical differential diagnosis of APD includes prurigo nodularis, hypertrophic lichen planus (however, a central hyperkeratotic plug is missing in these two), multiple keratoacanthomas, arthropod bites, folliculitis, phrynoderma of vitamin A deficiency, dermatofibromas and excoriated dermal diseases such as granuloma annulare. If there is evidence of Koebnerization, psoriasis, lichen planus and verrucae vugaris may be considered.

Diagnosis is made clinically and by skin biopsy. Differentiation between the different forms of perforating disorders can be accomplished with the use of Masson trichrome stains for collagen (RPC), Verhoeff-van Gieson stains for elastic tissue (EPS), and step-sectioning to visualize hair follicles (PF). Typically, a diagnosis of diabetes and renal failure will be known to the patient presenting with perforating skin lesions.

In the original description of RPC, renal failure and diabetes were not noted. However, most acquired perforating disorders are seen in association with kidney failure, diabetes or both. Other reported associations have included hypothyroidism, hyperparathyroidism, hepatic disorders, HIV infection as well as primary sclerosing cholangitis. Some of these reported associated conditions may be coincidental findings.

Most acquired perforating disorders are seen in association with renal failure, diabetes, peritoneal dialysis or all of the above. APD affects about 10% of dialysis patients. Other, less common associations reported in the literature are hypothyroidism, hyperparathyroidism, liver disorders, HIV infection, Hodgkin disease, primary sclerosing cholangitis, and a number of other sporadic diseases. Several cases have been reported in association with scabies and are primarily attributable to scratching.

The perforating diseases of the skin are characterized by transepidermal elimination (TEE) of various dermal connective tissue components through the epidermis. The material extruded from the dermis through the epidermis may include collagen and elastin (in classic perforating dermatoses), but some authors extend the list to include inflammatory cells, red blood cells, microorganisms, calcified material, neoplastic cells and extracellular substances, such as mucin.

The term “perforation” implies an active process. However, it is difficult to envision elements of dermal connective tissue or hair shafts actively perforating into the epithelium and therefore the term “transepidermal elimination” is a more accurate concept where viable epidermis plays an active role in the process. Several factors have been implicated in the pathogenesis of acquired perforating dermatosis. Altered dermal collagen, either as a result of superficial trauma or a genetic susceptibility likely underlies the pathogenesis of RPC.

In patients with diabetes and uremia, the serum level and dermal matrix deposition of fibronectin is increased. Fibronectin plays a major role in cell adhesion, growth, migration, differentiation and wound healing. It interacts with type IV collagen, a constituent of basement membranes, as well as keratinocytes and may promote epithelial proliferation leading to formation of perforating channels.

Vitamin A metabolism may play a role as vitamin A levels are elevated during dialysis. Other proposed mechanisms include abnormal vitamin D metabolism, microvasculopathy and dermal microdeposits of crystalline substances, such as uric acid, hydroxyapatite and silicon in patients on dialysis.

The most important systemic associations are those of diabetes and chronic renal disease ,which is most often secondary to diabetic nephropathy. Thus, diagnosis and appropriate management of these underlying conditions is mandatory.

Therapeutic options for perforating dermatoses include the following:

General measures involve protection from trauma and should include trimming of fingernails, avoidance of scratching, use of gloves to minimize scratching. Minimizing pruritus is important to control scratching. Pruritus can be managed initially with topical or intralesional corticosteroids, anesthetics, and counter-irritants (menthol or camphor). Oral antihistamines can be tried, but are usually minimally effective.

The topical regimen most commonly prescibed includes emollients, keratolytics, corticosteroids and retinoids.Topical application of retinoids, tretinoin 0.1% cream or tazarotene 0.1% gel, for 3 months can be tried first.

Physical modalities include broadband and narrowband ultraviolet B irradiation, psoralen plus ultraviolet A (PUVA), cryotherapy, as well as surgical removal of lesions combined with oral clindamycin. Ultraviolet B (UVB) phototherapy is dramatically effective for diminishing both pruritus and cutaneous lesions. UVB phototherapy sessions, three times a week for 6 weeks need to be carried out before therapy could be deemed ineffective. For limited disease, cryotherapy can be efficacious.

Since there are no randomized, placebo-controlled studies evaluating the efficacy of different treatment modalities, the current available evidence consists of isolated case reports or case series. The therapeutic ladder employed by many clinicians includes topical corticosteroids and UVB phototherapy. Typically, two to three weekly phototherapy sessions for 4-6 weeks are required to see improvement.

If UVB phototherapy and topical corticosteroids are ineffective, oral retinoids and allopurinol can be tried. It has been suggested that remissions in patients treated with allopurinol result from immunomodulating, pro-differentiation and antioxidative properties of allopurinol, besides its urocostatic effect.

It is important to educate the patient about the association with renal disease and diabetes and the need to be followed closely by a nephrologist and/or endocrinologist. Patients can be followed at reasonable intervals depending on degree of symptoms and should be informed that treatment options are not uniformly effective and may require a “trial and error” approach.

It should be remembered that, although rare, APD has been associated with hypothyroidism, hyperparathyroidism, liver disease, HIV, primary sclerosing cholangitis, and a number of other sporadic disorders. A careful review of systems may be used to determine if further physical examination or investigations are warranted.

Ohe, S, Danno, K, Isei, T, Okamato, H, Horio, T. “Treatment of acquired perforating dermatosis with narrow band ultraviolet B”. J Am Acad Dermatol. vol. 50. 2004. pp. 892-4. (Effective narrowband treatment of acquired perforating dermatosis is described in five patients. Phototherapy was given 2 or 3 times weekly. The dose was started at 400 mJ/cm2 and increased to a maximum of 1500 mJ/cm2. All lesions disappeared completely after 10 to 15 exposures without adverse effects. Two patients with diabetes mellitus but without chronic renal failure experienced no recurrence until 5 and 10 months after stopping the phototherapy. One patient undergoing hemodialysis for chronic renal failure experienced a recurrence of pruritus and small papules after 1 month. Two patients undergoing hemodialysis showed no recurrence during narrowband UVB maintenance therapy until 7 and 8 months.)

Patterson, J.Y. “The perforating disorders”. J Am Acad Dermatol. vol. 10. 1984. pp. 561-81. (An excellent review of perforating dermatoses, describing the mechanisms, histopathological features, treatment modalities as well as some of the difficulties in classification of these disorders.) 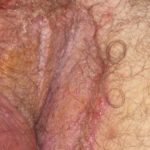