1. Description of the problem

What every clinician needs to know

The hepatorenal syndrome (HRS) is a form of volume-unresponsive acute kidney injury, defined as a progressive deterioration of renal function in patients with underlying severe and typically progressive liver failure, in the absence of an identifiable cause, which does not respond to fluid resuscitation.

Clinical features of the condition

Overt or covert sepsis is the most common precipitant of hepatorenal syndrome. As such, the emergency management of any patient with acute or chronic liver failure with a deterioration in renal function is as follows:

Is there a precipitating event? Does this require specific management (e.g., terlipressin for variceal hemorrhage)?

The hepatorenal syndrome is defined as a progressive deterioration in kidney function that does not respond to fluid resuscitation and is not due to intrinsic renal disease (glomerulonephritis or interstitial nephritis) or obstruction, in patients with established severe progressive liver failure, which may be acute or chronic.

The diagnosis of hepatorenal syndrome is one of exclusion of other causes of acute kidney injury in patients with established progressive liver failure.

Hepatorenal syndrome is traditionally subdivided into type I and type II. Type 1 HRS is characterized by a rapid and progressive impairment in renal function (increase in serum creatinine of equal to or greater than 100% compared to baseline to a level higher than 2.5 mg/dl (223 umol/l) in fewer than 2 weeks (Figure 1), and is now most often observed with ACLF, in the setting of multiple organ dysfunction. Type II HRS is characterized by a stable or less progressive impairment in renal function.

In patients with progressive liver failure the diagnosis of hepatorenal syndrome is based on the following:

Exclusion of other causes of acute kidney injury:

How do I know this is what the patient has?

The patient has hepatorenal syndrome because:

What else could it be?

The majority of patients with cirrhosis and ascites admitted to the hospital with a sudden deterioration in liver function have sepsis as a precipitating factor. In patients with severe liver disease, splanchnic vasodilatation leads to compensatory activation of the visceral and renal sympathetic nervous systems, and increased neuro-hormonal response (increased renin, aldosterone, norepinephrine and vasopressin, and visceral sympathetic nervous system activation). This alters the normal renal autoregulation curve (Figure 2), and as such these patients are much more susceptible to acute ischemic renal injury due to a fall in the effective intravascular volume associated with sepsis and hypovolemia.

In addition, ascites increases intra-abdominal pressure, which leads to an increase in renal venous pressure, resulting in increased renal interstitial pressure (Figure 3) and intra-renal endothelin, causing further glomerular ischemia and ischemic kidney injury. If the precipitating event is volume depletion without inflammation, such as acute variceal hemorrhage, excess diarrheal losses due to lactulose or over-diuresis, patients may have volume-responsive acute kidney injury.

Occasionally patients may have an acute interstitial nephritis associated with drug reaction; this is more commonly found with penicillin and cephalosporin antibiotics, but can occur secondary to diuretics, nonsteroidal anti-inflammatories, proton pump inhibitors, and other drugs. In addition, toxic renal tubular injury can occur with acetaminophen self-poisoning and ingestion of animal, plant and chemical toxins that also cause liver damage. Patients with HIV taking anti-retrovirals that affect mitochondrial function are much more prone to renal tubular ischemia and volume-unresponsive acute kidney injury.

Glomerulonephritis causing acute kidney injury is less common in patients with severe liver failure but can occur in cases of cryoglobulinemia associated with hepatitis C, and polyarteritis nodosa due to underlying hepatitis B. Very occasionally, patients with IgA nephropathy develop macroscopic hematuria, which results in intra-tubular obstruction and AKI, or patients with decompensated Wilson’s disease have marked hemolysis and developed heme pigment nephropathy.

Patients with acute and chronic liver failure may have established comorbidities, such as diabetes mellitus, hypertension and polycystic kidney disease, which would make them more susceptible to acute kidney injury due to pre-existing chronic kidney disease. In these latter cases and also IgA nephropathy, patients may have established proteinuria and hematuria, and as such, urine testing wiil be abnormal, but this does not necessarily exclude an additional diagnosis of hepatorenal syndrome.

What confirmatory tests should be performed?

There are no specific confirmatory tests that you should perform. The diagnosis is one of exclusion of other causes of acute kidney injury in patients with severe progressive liver failure.

Tests of exclusion include:

Urine microscopy (should be normal, less than 50 RBCs per high-power field).

Urine dip stick or quantification to exclude proteinuria (should be less than 500 mg/24 hr proteinuria).

If there has been a precipitating event in cases of ACLF, such as sepsis or variceal hemorrhage, special treatment is required. Otherwise management centers around two key objectives (Figure 4):

Unless the patient has clinical signs of intravascular volume overload, plasma volume expansion is recommended.

Terlipressin, a vasopressin analogue, is currently the vasoconstrictor of choice, as it preferentially causes splanchnic vasoconstriction. However, as it is a potent vasoconstrictor, careful consideration and care should be used in patients with symptoms or signs of myocardial ischemia, peripheral vascular disease or cerebrovascular disease.

Terlipressin is usually started at a dose of 0.5-1 mg q4-6h and increased steadily to a maximum of 2 mg q4-6h, given as either a subcutaneous injection or as an infusion over 2-4 hours, if there is no reduction in serum creatinine of at least 25% compared to the baseline value at day 3 of therapy, then terlipressin is unlikely to be effective and the patient most likely has volume unresponsive AKI (formerly termed acute tubular necrosis). Treatment appears equally effective with either subcutaneous injections or continuous infusion, and should then be continued until the serum creatinine has decreased below 1.5 mg/dl, usually to around 1-1.2 mg/dl.

Response to therapy with terlipressin is generally characterized by a slow progressive reduction in serum creatinine in combination with an increase in arterial pressure, urine volume and serum sodium concentration. Median time to response is around 14 days and usually depends on pre-treatment serum creatinine; it is shorter in patients with lower baseline serum creatinine values and longer in those with higher starting creatinine values.

A serum bilirubin less than 10 mg/dl before treatment and an increase in mean arterial pressure greater than 5 mmHg by day 3 of treatment are associated with a high probability of response to therapy. Treatment is effective in 40-50% of patients and is most successful when used in combination with daily albumin infusions. Once the serum creatinine has fallen to less than 1.5 mg/dl, withdraw terlipressin rather than decreasing the dose, as recurrence after withdrawal of therapy is uncommon.

If terlipressin is unavailable, then norepinephrine (0.5-3.0 mg/h) may be a suitable alternative in the intensive care setting. In the ward setting the combination of oral midodrine and subcutaneous octreotide has had some success, albeit less effective than terlipressin. Midodrine is typically started at 2.5 mg pot id, and increased up to 15 mg pot id, and octreotide 50 ug sc tid increased up to 200 ug sc tid.

If the precipitating factor is alcohol ingestion: in patients with alcohol-induced cirrhosis, oxypentifylline 200 mg pg tid was previously recommended, although more recent trials have not shown any benefit.

If the patient is not responding to terlipressin therapy by day 5, review the patient and reassess intravascular volume status. If volume depleted, then increase the volume of albumin administered.

Patients with hepatorenal syndrome precipitated by sepsis may have a reduced adrenal response. Thus, in refractory cases, check cortisol response to synacthen, and if sub-optimal then give hydrocortisone.

As cortisol is bound to cortisol binding globulin (CBG), then total cortisol concentrations may appear low to due to reduced CBG synthesis, and if free cortisol assay is not available then salivary cortisol may be equivalent to free cortisol.

If no response, then discontinue terlipressin on day 10 and consider alternative therapies.

Transjugular intrahepatic portosystemic shunting (TIPS) has been reported to improve renal function in patients with type 1 hepatorenal syndrome. However, many patients with hepatorenal syndrome will have contraindications to TIPS, including severe liver failure and hepatic encephalopathy, and plasma ammonia should be checked prior to a TIPS procedure, as ammonia levels will increase post TIPS.

Renal replacement therapy (RRT) in the form of peritoneal dialysis, intermittent hemodialysis and continuous forms of hemodialysis and hemofiltration have been used in selected cases of hepatorenal syndrome. RRT is indicated for life-threatening hyperkalemia, severe metabolic acidosis and volume overload. However, patients with severe acute or chronic progressive liver failure are prone to infection, hypotension and bleeding, which may make RRT problematic.

As RRT has not been shown to improve outcomes in patients with hepatorenal syndrome, RRT should only be considered as a short-term bridging treatment for life-threatening emergencies, or short-term supportive therapy for patients predicted to have recovery of liver failure, or those considered for liver transplantation.

As RRT only effectively removes small water-soluble toxins, a number of extracorporeal devices have been developed that can remove lipid-soluble and protein-bound toxins. The MARS system uses an albumin dialysate, which is regenerated by two sorbent columns, whereas the Prometheus device has a high-permeability filter and the ultrafiltrate passes through two sorbent columns.

As these sorbents become saturated these are intermittent treatments of 4-6 hours. In addition, some centers use single-pass albumin dialysis (SPAD) as a continuous treatment. Although initial single-center trials suggested encouraging results for MARS and Prometheus treatments for patients with hepatorenal syndrome, later prospective controlled multicenter trials showed no survival benefit.

Patients with hepatorenal syndrome who respond to vasopressor therapy should be treated by liver transplantation alone.

There is, however, a subgroup of patients who require prolonged renal support (more than 12 weeks), and these patients should therefore be considered for combined liver and kidney transplantation.

Although treatment with terlipressin combined with albumin is effective in 40-50% of patients, the long-term outlook for patients with hepatorenal syndrome without liver transplantation remains poor, with an average median survival time of only approximately 3 months.

Patients discharged from the hospital should be assessed for their suitability for liver transplantation by specialist hepatologists.

There are five major factors generally recognized in the development of hepatorenal syndrome:

More recently it has been recognized that patients with a greater systemic inflammatory response (SIRS) are at increased risk of developing hepatorenal syndrome. Increasing inflammation results in reduced ability for albumin to act as a detoxifying molecule, as binding site capacity falls, and structural modifications of albumin reduce its ability to take up further toxins. So called ischemia modified albumin.

Long-term norfloxacin (400 mg/day) has been shown to decrease the risk of developing hepatorenal syndrome and to improve survival in patients with advanced cirrhosis, hyponatremia and those with low protein concentration in their ascitic fluid.

Patients presenting with spontaneous bacterial peritonitis should be treated with intravenous albumin, as this has been shown to decrease the incidence of hepatorenal syndrome and improve survival.

There are limited data to suggest that pentoxifylline decreases the incidence of hepatorenal syndrome in patients with severe alcoholic hepatitis.

The probability of developing hepatorenal syndrome in patients presenting with cirrhosis and ascites increases from 18% in the first year to approximately 40% at 5 years.

Patients with established cirrhosis should be regularly monitored by medical review as patients will generally develop progressive liver disease over time.

Patients should be managed in a high-dependency level 2 facility.

Jump to Section
Next post in Critical Care Medicine 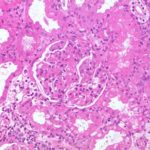