Nephrotoxicity remains a concern with the newer generation of tyrosine kinase inhibitors (TKI), with proteinuria and acute kidney injury (AKI) occurring in a subset of users, investigators reported at Kidney Week 2022, the annual meeting of the American Society of Nephrology, in Orlando, Florida.

The median duration of TKI therapy ranged from 28 to 67 days, Omar Mamlouk, MD, of of MD Anderson reported on behalf of his team. Proteinuria developed in 39% to 61% patients, depending on the TKI. Proteinuria was more frequent with regorafenib (61%) than axitinib (39%).

AKI developed in 1.5% of TKI users within 30 days and in 11.1% after 30 days. The proportion of patients experiencing AKI ranged from 10% with irbutinib to 28% with ponatinib. The AKI rate with the newer TKIs is similar to the rate with the first-generation, Dr Mamlouk pointed out, with the exception of ponatinib, which carried a 2- to 3-fold higher risk of AKI.

In univariate analysis, diabetes and proton pump inhibitors were significantly associated with increased risk of developing proteinuria and AKI, respectively, during TKI therapy.

“Around 50% of the patients develop any degree of proteinuria and 10-28% of the patients develop AKI while on TKI therapy. Despite the potential association with renal manifestations, the choice of TKI should still be made based on the superior cancer outcome rather than the risk of nephrotoxicity,” Dr Mamlouk said in an interview with Renal & Urology News. 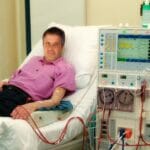