PHILADELPHIA—Researchers have developed a new and simple way to monitor nonadherence to immunosuppressive medications and predict an increased risk of graft rejection in pediatric renal transplant patients.

PHILADELPHIA—African Americans with hypertension-related CKD may be more likely to progress to end-stage renal disease (ESRD) than die from cardiovascular disease (CVD), the opposite of what has been reported for other CKD populations in many studies, researchers conclude.

A Better Marker of Glycemic Control

PHILADELPHIA—Serum fructosamine (SF) may be a better marker of glycemic control than glycosylated hemoglobin (HbA1c) in diabetic patients on hemodialysis, new data suggest.

A Novel Approach to RCC Treatment

PHILADELPHIA—Researchers say they may have identified a novel approach to treating renal cell carcinoma (RCC). It involves using compounds that block a cancer gene’s repair mechanism so that chemotherapy is more effective.

PHILADELPHIA—Tighter restriction of protein intake does not increase the likelihood of survival among CKD patients not yet on dialysis, according to an Italian study that also showed that serum phosphate levels predict progression to dialysis and death. 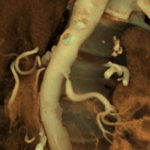 No Benefit from Renal Stents