The ideal level of iron stores, as commonly measured by TSAT and ferritin, to optimize efficacy and safety is unknown, so investigators from the Collaborative Study Group led by Kausik Umanath, MD, MS, of Henry Ford Hospital in Detroit, and Jamie P. Dwyer, MD, of Vanderbilt University in Nashville, attempted to address this issue using the trial database of a recently completed clinical trial from the Collaborative Study Group, an international, non-profit organization dedicated to rigorous design and analysis of pilot and multinational, large-scale, randomized clinical trials in relevant therapeutic areas.

The research team examined data from a phase 3 trial of ESRD patients randomly assigned 2:1 to receive treatment with the phosphate binder ferric citrate or an active control phosphate binder that did not include iron. IV iron was allowed at each study site’s discretion whenever patients’ ferritin levels or TSAT dropped to or below 1,000 ng/mL or 30%, respectively.

Results showed that patients with a TSAT of 34% and above were 37% less likely to require an ESA dose in the higher range (1,535 units per week or more) to maintain hemoglobin. (Ferritin, by comparison, did not predict ESA dose.) Likewise, the need for higher IV iron doses (48 mg per week or more) was lower by 58% for TSAT in the middle range (26%–33%) and by 77% for TSAT in the highest range (34%– 83%). Findings were similar when analyzed by active control or ferric citrate treatment.

“Our analyses indicate that TSAT may be a more illustrative marker for iron stores than ferritin in patients with ESRD,” Dr. Umanath told Renal & Urology News. “Since ferritin is also a marker of inflammation, elevations of ferritin in an ESRD patient may not always be a sign of increased iron in the body.”

The study, a secondary analysis of data collected for a different purpose, falls short of a prospective trial that can assess the value of iron stores at higher levels than currently used, according to the researchers. In addition, the study used a 90-day moving average of ferritin and TSAT, which makes it more difficult to interpret a single measurement in an individual patient at any given time. 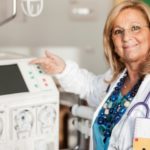