SAN DIEGO—Iron deficiency is common among renal transplant recipients and it is associated with increased mortality risk independent of anemia, according to study findings presented at the Kidney Week 2015. 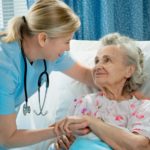