ORLANDO, Fla.—Halving the time a patient with high-risk prostate cancer (PCa) is on androgen deprivation therapy (ADT) is safe and does not compromise outcomes, researchers concluded.

In a randomized phase 3 study of 630 patients with node-negative high-risk PCa treated with external beam radiotherapy (EBRT) and long-term ADT, investigators found no significant differences in overall and cancer-specific survival and in the risk of biochemical and regional and distant failure among patients treated with 18 or 36 months of ADT.

ADT consisted of bicalutamide 50 mg for one month plus goserelin 10.8 mg every three months. For the radiotherapy, the radiation dose was 44 Gy for the whole pelvis and 70 Gy for the prostate.

The current recommended duration of ADT for these patients is 24-36 months, the investigators, led by Abdenour Nabid, MD, a Fellow of the Royal College of Physicians of Canada, noted.

“Shorter-term hormone therapy could have a big impact on the lives of men with prostate cancer, reducing the quantity and intensity of its unpleasant side effects as well as treatment costs,” said Dr. Nabid, an associate professor at Centre Hospitalier Universitaire de Sherbrooke in Sherbrooke Canada.

In an oral presentation, he told attendees that he and his colleagues hypothesize that 18 months represents a threshold beyond which no further gain occurs. “The job is done,” he said. 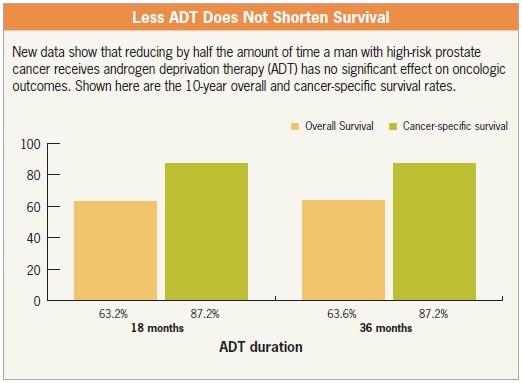 Commenting on the new study, Andrew J. Stephenson, MD, Director of the Center for Urologic Oncology at Cleveland Clinic’s Glickman Urological and Kidney Institute, noted the radiation doses administered to the patients were modest compared with what would be used today. The current standard of care for high-risk PCa patients receiving EBRT remains adjuvant ADT for two to three years, he said.

Still, he said it appears that 18 months of ADT was not associated with inferior outcomes compared with 36 months. It may be reasonable to treat patients with 18 months of ADT if they experience major adverse effects while on treatment or if they have important comorbid problems that may worsen with prolonged ADT, Dr. Stephenson told Renal & Urology News.

“This study does not change the standard of care; however, 18 months of therapy may be a consideration for select patients,” Dr. Stephenson said.

The study population had a median age 71 years, a median PSA level of 16 ng/mL, and a median Gleason score of 8. Most patients had T2-3 disease. The two study arms were well balanced with respect to patient characteristics, Dr. Nabid’s group noted.