PARIS—New data show that the severity of periodontitis is associated with arterial stiffness in patients with worsening chronic kidney disease (CKD).

The study by British researchers found that patients who had more severe periodontitis tended to have increased arterial stiffness.

“Increased arterial stiffness typically occurs with CKD and may alter cardiac structure and function and ultimately increase the risk of cardiovascular death, which is a significant cause of morbidity and mortality in patients with CKD,” Stephanie Stringer, MD, renal research fellow at the University Birmingham, said in an interview at the 49th Congress of the European Renal Association-European Dialysis and Transplant Association.

“If we eventually show from our prospective observational study that periodontitis in CKD patients is a risk factor for cardiovascular disease and renal progression,” Dr. Stringer continued, “this would lead to the development of studies to test whether treatment of periodontitis alters renal and cardiovascular outcomes. Thus, it may be that interventions aimed at improving periodontal health may play an important role in reducing the cardiovascular burden in patients with progressive CKD.”

Periodontitis is characterized by chronic, low-grade inflammation of the gums and occurs in about 15% of patients with CKD, but the prevalence varies widely depending upon the population studies and the classification of periodontitis used, Dr. Stringer said.  Although a lot of research has been done on inflammation in rheumatology and cardiology cohorts, limited data exist on the periodontal health of patients with CKD and how this might influence their outcomes.

The prevalence of normal periodontal health, gingivitis, periodontitis and edentulous were 3.8%, 10%, 65.4% and 13.7%, respectively. Of the subgroup with periodontitis, the condition was classified as mild in 79, moderate in 41, and severe in 18 patients. 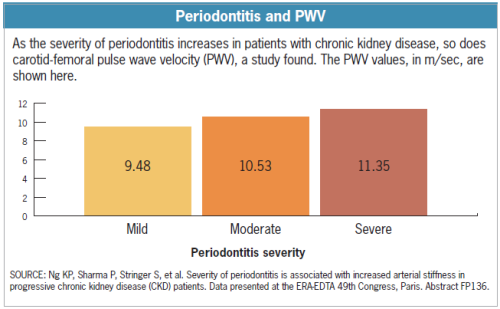 The data showed that increasing periodontitis severity was significantly associated with increasing PWV.  PWV values in patients with mild, moderate and severe periodontitis were 9.48, 10.53, 11.35 m/sec, respectively.

These results suggest that the severity of periodontal disease is related to arterial stiffness, an important determinant of cardiovascular risk.

Study co-author Khai Ping Ng, MD, also a renal research fellow at the University of Birmingham, said that the research team plans to follow the study cohort for 10 years to identify the determinants of progressive kidney disease and cardiovascular risk, and to examine whether periodontal disease is an important and potentially reversible factor.  “Such information will be meaningful for patients because we could then tell them that periodontitis does not just influence a surrogate measure like pulse wave velocity but that it could actually increase their risk of eventually ending up on dialysis or experiencing a heart attack or stroke.”