Persistent PSA levels are common after salvage radical prostatectomy (RP) and may independently predict poor oncologic outcomes, according to study findings presented at the 2022 congress of the European Association of Urology in Amsterdam, The Netherlands.

“Salvage radical prostatectomy patients should be closely monitored after surgery to identify those with persistent PSA, who may qualify for further treatment,” said first author Felix Preisser, MD, of the University Hospital Frankfurt in Germany, who presented study findings.

Using a database maintained by a high-volume medical center, Dr Preisser’s team identified 145 men who underwent salvage RP for recurrent prostate cancer between 2004 and 2020 and who had available PSA values. The team looked at the effect of persistent PSA, defined as a PSA level of 0.1 ng/mL or higher 4-8 weeks after salvage RP on biochemical recurrence (BCR), metastasis, and death. The median follow-up was 47 months and the median time to salvage RP was 44.1 months. The median time to first PSA after surgery was 13.7 weeks. No patients died from prostate cancer during follow-up.

Men with persistent PSA had significantly higher median preoperative PSA values (6.8 vs 5.1 ng/mL) compared with men who had undetectable PSA, and they were significantly more likely to have positive surgical margins (37.5% vs 15.7%), seminal vesicle invasion (42.9% vs 21.3%), and lymph node invasion (44.6% vs 5.6%), Dr Preisser reported.

In multivariable analyses, persistent PSA was significantly and independently associated with an 8.8-fold increased risk for BCR, according to the investigators. Preoperative PSA levels independently predicted PSA persistence after salvage RP.

Tomasz M. Beer, MD, Professor of Medicine and Grover C. Bagby Chair of Prostate Cancer Research at Oregon Health & Science University in Portland, said the findings are not surprising and noted that salvage RP is a challenging procedure. It is performed for persistent or recurrent prostate cancer, which differs greatly compared with initial therapy. “It is a ‘second attempt at cure’ if you will,” Dr Beer said. “So treatment success is expected to be less common than when prostatectomy is used as first line therapy. I think the study points to the importance of careful selection of patients most likely to benefit from salvage prostatectomy. The procedure is best offered to patients who have a high probability of success.”

Men with a detectable PSA after salvage RP commonly require additional treatment, but the type of treatment and when it should be given remain unclear, Dr Beer said. “It is not clear that immediate hormonal therapy, for example, is more beneficial than treatment started later,” he said.

Anthony Victor D’Amico, MD, PhD, Chief of the Division of Genitourinary Radiation Oncology at Dana-Farber Cancer Institute and Professor of Radiation Oncology at Harvard Medical School in Boston, Massachusetts, said men with a persistent PSA after salvage RP likely have disease beyond the prostate, perhaps in pelvic or other lymph nodes. Disease also could have spread to the lungs, liver, or bones. “A negative PSMA PET prior to salvage RP may improve the selection of men for salvage RP by excluding those with disease beyond the prostate that can be visualized on PSMA PET but falls below the limit of detection when using conventional imaging,” Dr D’Amico said.

William Catalona, MD, said the new study findings are what he would expect, and they reflect the realistically limited expectations for the outcomes of salvage RP. “I am not bullish about salvage prostatectomy. The analogy I use with patients is that it is ‘like going through a mine field.’” Men who undergo salvage RP face high risks for urinary incontinence and erectile dysfunction, as well as other complications.

Men who still have elevated PSA levels after salvage RP eventually need intermittent or continuous hormonal therapy and possibly chemotherapy and other tertiary treatments. “Overall, only a small percentage of patients make it through this mine field unscathed,” Dr Catalona said.

He said it is paramount to look at quality of life issues. Careful and nuanced counseling and shared decision-making with patients is the best place to start to identify their biggest concerns. “In my opinion, most patients are better served with intermittent hormonal therapy. In short, salvage prostatectomy offers limited prospects for improving prostate cancer-specific mortality and substantial risks for increasing morbidity,” Dr Catalona said. 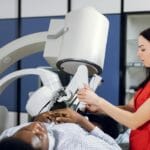 Ureteric Stone Treatment Changed During the Pandemic, but Outcomes Did Not