Use of 5-alpha-reductase inhibitors (5-ARIs) is associated with a lower risk of dying from bladder cancer among men newly diagnosed with the malignancy, researchers reported at the 33rd European Association of Urology Congress in Copenhagen, Denmark.

In a study of 10,720 men newly diagnosed with bladder cancer during 1997 to 2012, first author Ville J. Mäkelä, a medical student at the University of Tampere in Finland, and colleagues found that 5-ARI use before diagnosis and after diagnosis was associated with a significant 15% and 22% decreased risk of bladder cancer-specific death, respectively, compared with non-use. Results also showed that pre- and post-diagnostic use of alpha-blockers was not associated with death from bladder cancer. The investigators included alpha-blockers in their study to account for possible confounding by indication, such as concomitant BPH, for which both alpha-blockers and 5-ARIs are prescribed.

The study supports the role of androgens and benefits of 5-alpha-reductase inhibition in the progression of bladder cancer, the investigators concluded. 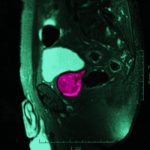