Testosterone levels below 50 ng/dL traditionally have been considered castration-levels, but investigators found that achieving levels below 20 ng/dL at 6 months after ADT initiation predicted a significant 45% decreased risk of progressing to castration-resistant PCa (CRPC) compared with higher levels.

At 6 months, 57 men had absolute testosterone levels below 20 ng/dL and 59 had higher levels. The groups did not differ significantly in median age (69 vs 68 years) or median pretreatment PSA level (both 7 ng/mL).

Patients who had an absolute testosterone level below 20 ng/dL at 6 months had a significantly increased median time to castration-resistant disease compared with those whose level was 20 ng/dL or higher (48 vs 24 months), Dr Shayegan and his colleagues reported. 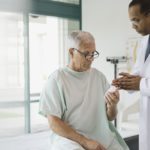