SAN FRANCISCO—The IsoPSA test, an investigational blood assay, predicts a man’s risk of harboring high-grade prostate cancer more accurately than standard PSA tests and has the potential to reduce the number of unnecessary prostate biopsies substantially, according to the findings of a prospective validation study presented at the American Urological Association 2018 annual meeting.

The study, led by Eric A. Klein, MD, Chair of the Cleveland Clinic’s Glickman Urological & Kidney Institute, confirms the findings preliminary study presented at last year’s AUA annual meeting. The validation study, which included 271 patients who had blood drawn for IsoPSA analysis within 30 days of a prostate biopsy, showed that IsoPSA has a 94% sensitivity for detecting high-grade (Gleason score 7 or higher) cancer and a 93% negative predictive value for high-grade cancer, Dr Klein said. “If you have a low IsoPSA number, you’re about 93% certain that you don’t have high-grade cancer,” he said. Results showed that 47% of prostate biopsies could have been avoided.

The validation study included men who also underwent magnetic resonance imaging (MRI)-guided prostate biopsy—which has been shown to improve detection of high-grade PCa—in addition to the IsoPSA test. Use of both MRI and IsoPSA together accurately predicted the presence of high-grade cancer about 86% of the time. “That’s pretty good, certainly much better than standard PSA and free PSA,” Dr Klein told Renal & Urology News.

IsoPSA may be able to cut down on the use of MRI scans, which miss about 20% of high-grade cancers, Dr Klein said. Patients with a negative IsoPSA result, which indicates with 93% certainty that high-grade cancer is not present, probably would not need an MRI scan, he said.

Moreover, the test should make things easier for clinicians. Currently available tests require that blood specimens be sent to a central lab, which then faxes or emails results to a doctor’s office, Dr Klein said. Wait times for results could be several days. This would not be the case with IsoPSA.

“Any hospital lab is going to be able to do this, and that’s the beauty of it, because it just requires a standard blood draw,” he said. The results can be sent directly to an electronic medical record (EMR) system inbox. Most EMR systems have a feature (e.g., Epic MyChart) whereby doctors can send a message to a patient explaining the results and what the next step in his management will be, he said. 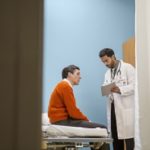