Patients with end-stage renal disease (ESRD) due to autosomal dominant polycystic kidney disease (ADPKD) are significantly more likely than other patients with ESRD to receive a kidney transplant and to use home hemodialysis, according to the findings of a Canadian study presented at the Annual Dialysis Conference in Orlando, Florida. They also have superior survival rates.

The study, led by Manish M. Sood, MD, of the University of Ottawa and the Institute for Clinical Evaluative Sciences in Ontario, included 10,403 patients over age 18 years on renal replacement therapy (RRT): 2120 patients with ADPKD and 8283 without ADPKD. The investigators matched the groups by propensity score using such variables as age, sex, comorbidities, laboratory values, and year of ESRD.

Compared with non-ADPKD patients, the ADPKD group had 7-fold greater odds of receiving a pre-emptive kidney transplant, 2.4-fold greater odds of receiving any kidney transplant, and 2.7-fold increased odds of using home hemodialysis. They also were 3.2-fold more likely to have an arteriovenous fistula (AVF), and 15% decreased odds of using peritoneal dialysis.

The overall mortality rate during the 12-year study was 21% in the ADPKD group compared with 34.1% in the non-ADPKD group. The mortality rates were lower among patients with ADPKD regardless of whether their initial ESRD treatment modality was intermittent hemodialysis (26.8% vs 39%) or peritoneal dialysis (17.4% vs 24.7%).

“Ideally, we want to maximize patients who receive a transplant and, if not available, utilize home dialysis modalities and receive dialysis by an AVF,” Dr Sood told Renal & Urology News. “It is encouraging to see more ‘optimal care’ in patients with ADPKD. As patients with ADPKD are often younger, with less comorbid illness and an unfortunate predictable progression to kidney failure, it follows they are usually excellent candidates for transplant and home dialysis.”

For the study, Dr Sood and his colleagues used data captured by the Canadian Organ Replacement Registry from January 1, 2001 to December 31, 2012. The CORR collects patient-level treatment and outcomes data for various factors related to patients’ RRT. The ADPKD and non-ADPKD groups had mean ages of 56.7 and 57.4 years, respectively. The proportion of women in each group was 46%.

A previous study conducted in the United States also found a higher kidney transplantation rate and lower mortality rate among patients with ADPKD-related ESRD compared with matched controls with ESRD from other causes. That study, published in the American Journal of Kidney Diseases (2014;64:592-599), showed that the rate of kidney transplantation, per 100 person-years, was 9.8 in the ADPKD group vs 4.8 in the non-ADPKD group over a mean follow-up of 4.9 years. The death rate was 5.6 vs 15.5 per 100 person-years, respectively. Patients in the ADPKD group were more likely than those without ADPKD to undergo preemptive kidney transplantation. In adjusted analyses, the ADPKD group was 7.2 times and 4.3 times more likely to have a preemptive transplant from a living donor and deceased donor, respectively, compared with the non-ADPKD group. 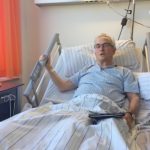