Hiroki Ide, MD, of Keio University School of Medicine in Tokyo, and colleagues studied 1128 patients with nonmuscle-invasive bladder cancer (NMIBC) without a history of upper tract urothelial carcinoma (UTUC). During a mean follow-up period of 64 months, recurrent bladder cancer and UTUC developed in 437 (38.7%) and 38 (3.4%) patients, respectively. Of the 1128 patients, 548 (48.6%) received BCG instillation following TURBT. The 5-year bladder and UTUC recurrence rates were 33.3% and 1.9%, respectively, in patients treated with BCG, rates that were significantly lower than the 47.7% and 4.7% rates, respectively, among those not treated with BCG.

On multivariate analysis, BCG instillation was independently and significant associated with an approximately 48% and 74% decreased risk of bladder cancer and UTUC recurrence, respectively.

In addition, among male patients aged 70 years or older, the 5-year UTUC recurrence rate was significantly lower in patients treated with BCG than those who were not (1.6% vs 5.9%). Investigators found no significant difference among men younger than 70 years. 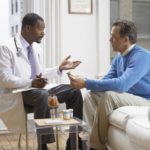 Study: Active Surveillance May Be a Safe Alternative to RP in Favorable-Risk PCa