SAN DIEGO–Data from studies presented at the American Urological Association 2016 annual meeting may help to clarify the role of ureteroscopic laser lithotripsy “dusting” for the treatment of kidney stones.

Ureteroscopy with laser lithotripsy is an established procedure for breaking apart kidney and ureteral stones. Traditionally, the technique involves basket extraction of fragments. With the newer dusting technique, urologists use low-pulse, high-frequency laser energies utilizing more powerful laser systems to pulverize stones into extremely fine fragments that can pass spontaneously in the urine, potentially obviating the need for basket extraction and the use of ureteral access sheaths.

“It’s a much more efficient way of dealing with a stone,” said Khurshid Ghani, MBChB, MS, of the University of Michigan in Ann Arbor, lead author of one of the studies. “We can tackle any medium- to large-size stones quite rapidly.”

Dr Ghani and his colleagues presented findings of a study of 71 patients who underwent 83 laser dusting procedures with a 120W holmium laser. Patients had a mean stone size of 12.5 mm (range 5–50 mm). The stones were present in the kidney in 73% of patients and in the ureters in 27%. Ureteral access sheaths were used in 21% of cases. After a mean follow-up of 102 days, the patient population had a 74% rate of stone clearance, defined as 2 mm residual fragments or smaller. The rate of grade 1 and 2 complications was 10%.

The investigators concluded that their findings suggest dusting may be an attractive alternative to basket extraction, sparing patients possible morbidity associated with the routine use of ureteral access sheaths.

In a separate study comparing dusting for the treatment of 5–20 mm renal stones, investigators from the Endourology Disease Group for Excellence (EDGE) Consortium found that basket retrieval results in a higher stone free rate than dusting (86.3% vs. 59.2%). The researchers, however, found no difference in readmission or re-intervention rates, or patients becoming symptomatic from residual stone fragments.

The study included 80 patients who underwent basket retrieval and 72 who underwent dusting. A ureteral access sheath was used in 100% of patients in the basket group and 18.2% of the dusting group.

One of the investigators, Brian H. Eisner, MD, of Massachusetts General Hospital in Boston, explained that the objective of the trial was not to demonstrate whether dusting was better or not better than basket retrieval. “We showed that each procedure has its advantages,” he said.

The consequences of residual stone fragments remain controversial, Dr. Eisner said. Urologists who are advocates of dusting believe the tiny fragments are not going to cause problems, but other urologists contend that even a single fragment in the kidney is bad. “I think our study clearly showed that in the short term, it [dusting] didn’t cause any unanticipated problems,” he said, adding that long-term follow-up is needed.

As for how Dr. Eisner approaches ureteroscopic laser lithotripsy procedures, he stated:

“You have to pick a strategy when you’re operating on a stone, and this includes choosing your initial laser settings. I tend to start with the dusting settings—settings of 0.3 Joules and 30 Hz or 0.4 Joules and 40 Hz were commonly used in our study. In my practice, if I find that the stone is amenable to rapid fragmentation, I leave it on those settings and try to dust it into very tiny pieces. If the stone doesn’t break that well, or it is a harder stone, then I switch to fragmenting the stone and basketing the pieces out.”

Not all stones are amenable to ureteroscopic laser lithotripsy, Dr. Ghani emphasized. These include stones in the lower pole of the kidney.

“Some stones can be quite tricky to get into,” Dr. Ghani said. “More importantly, we don’t like to break up the stones and dust them in the lower pole because they don’t really drain out, they don’t pass. So it’s important in those cases to actually pick up the stones and move them to another location in the kidney to then treat it with the laser. This is done with a basket during ureteroscopy.”

In addition, dusting may not be appropriate for harder stones, such as calcium oxalate monohydrate stones. “In those cases, you have to crack and retrieve fragments,” Dr. Ghani said. 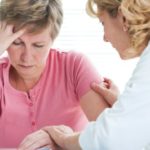