NEW ORLEANS—Digital rectal examinations (DREs) have questionable utility for detecting clinically significant prostate cancer (PCa) in men with normal PSA values, according to research findings presented at the 2015 American Urological Association annual meeting. In some cases, the risks associated with the DRE and follow-up testing may outweigh its benefits, according to investigators.

Tao Cui, MD, and colleagues from Wake Forest Baptist Medical Center in Winston-Salem, N.C., analyzed data from 35,873 men who participated in the Prostate, Lung, Colorectal, and Ovarian Cancer (PLCO) Screening trial. These men received 129,028 PSA tests and 124,694 DREs over the firt 3 years after randomization. Dr. Cui’s group evaluated the ability of the DRE to detect clinically significant PCa in the settings of normal PSA (less than 4 ng/mL) and abnormal PSA. The researchers defined clinically significant disease as intermediate-risk or higher prostate cancer (based on NCCN guidelines) in men younger than age 75.

Among men with normal PSA and abnormal DRE, 19.2% were found to have any prostate cancer. To detect 1 case of clinically significant prostate cancer not detected by PSA, 1,372 men needed to be screened with DRE.

While DREs do capture a few additional cases of clinically significant disease among men with normal PSA, its independent value appears limited. “If PSA is normal and DRE is considered abnormal, the chance of clinically significant cancer may not be any higher than if both DRE and PSA were normal,” Dr. Cui told Renal & Urology News. “We are not necessarily advocating for complete dismissal of the DRE, but this study sheds some light on its utility.”

The DRE does add prognostic information when PSA test results are abnormal. Compared with men who had only an abnormal PSA, men with both an abnormal PSA and DRE were almost twice as likely to be diagnosed with clinically significant prostate cancer.

The researchers noted that the exam itself is invasive and subjects a large number of men to discomfort for relatively minimal gain. “In our experience, we have encountered some patients that specifically cite the DRE as a reason why they avoid going to a physician,” Dr. Cui said. 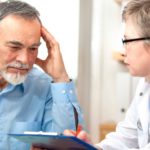