In a study of 105,226 men who underwent radical prostatectomy and had high-risk PCa features found on final pathology, only 7,741 (7.4%) received ART, according to a research team at the University of Chicago Medical Center led by Charles U. Nottingham, MD. For the study, the investigators defined high-risk features as pT2 tumors with a positive surgical margin (PSM) or pT3 and pT4 tumors with or without a PSM. The study excluded patients with lymph node involvement and metastatic disease. They defined ART as receipt of radiation therapy within 6 months of surgery.

Younger age was among the significant predictors of ART receipt. Compared with patients younger than 65 years, those aged 65–75 and older than 75 years were 24% and 51% less likely to receive ART. Other patient factors that significantly predicted receipt of ART included residing within the zip code of the treatment facility, surgery at a low-volume facility (50 cases or fewer per year), private insurance, a preoperative PSA level of 10 ng/mL or higher, a Gleason score of 7–10 at prostatectomy, and pT3 and pT4 cancers regardless of margin status.

Compared with patients who had surgery at a facility that treats 50 or fewer prostatectomy cases per year (first quartile), those who had surgery at facilities in the second, third, and fourth quartiles were 43%, 58%, and 67% less likely to receive ART. The lower use of ART at higher-volume centers may reflect a propensity to perform surveillance on high-risk patients and preferential treatment with salvage radiation therapy, Dr. Nottingham’s team concluded. 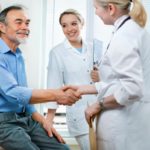