ORLANDO—Fluoroquinolones are widely accepted as a standard for prophylaxis prior to prostate biopsies, but new studies presented at the American Urological Association 2014 annual meeting show that a substantial minority of men carry rectal bacteria resistant to these antibiotics.

In one study, Michael A. Liss, MD, of the University of California San Diego, and colleagues studied 2,673 men with a median age of 66 years who underwent rectal culture prior to prostate biopsy in 2007-2013. The cultures revealed colonization by fluoroquinolone-resistant organisms in 20.5% of patients.

Post-biopsy infection occurred in 1.6% of patients who had cultures that were negative for fluoroquinolone-resistant organisms compared with 6.6% of those with cultures positive for these organisms. Hospitalization for infection occurred in 0.9% of patients with cultures negative for fluoroquinolone-resistant bacteria compared with 4.4% of those with positive cultures.

In another study, Jason Cohen, MD, and colleagues at Johns Hopkins University in Baltimore, looked at 354 prostate cancer patients undergoing prostate biopsy as part of an active surveillance protocol. Of these, 85 were found to have fluoroquinolone-resistant bacteria on at least 1 rectal swab. Men with diabetes were 2.4 times more likely to carry fluoroquinolone-resistant organisms than those without diabetes.

A third study presented at the meeting demonstrated that screening for fluoroquinolone-resistant Escherichia coli prior to a prostate biopsy may enable targeted antibiotic prophylaxis that can decrease the risk of post-biopsy sepsis. Michael Holmes, MD, of Waikato Hospital in Hamilton, New Zealand, and colleagues identified 3,338 men who underwent prostate biopsy from 2006-2013. In 2012, the hospital began a policy of culturing rectal swabs on ciprofloxacin-impregnated agar plates prior to biopsy. Positive cultures are re-plated to assess antibiotic resistance patterns. Prophylactic antibiotics are altered to ceftriaxone or ertapenem depending on culture findings.

Rectal swabs prior to biopsy were obtained in 248 men in 2013. Fluoroquinolone-resistant E. coli was identified in 20 men (12.4%). Seventeen isolates were multidrug-resistant but ceftriaxone sensitive; 3 had extended beta-lactamase activity.

The investigators defined sepsis as presentation to a regional hospital within 14 days of biopsy with a temperature of 38° C or higher. 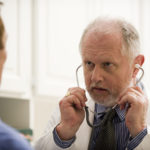