Researchers at Johns Hopkins University in Baltimore studied 24,233 adult first-time recipients of deceased donor kidney transplants (DDKT), of whom 9,924 received preemptive transplants and 14,309 received their organs within one year of starting dialysis. The investigators found no significant difference in mortality between these two groups, after adjusting for age, race, gender, and insurance status.

Preemptive transplant recipients were significantly older than those who received their transplants within a year of starting dialysis (53 vs. 50.9 years) and significantly more likely to be female than male (44% vs. 38%), white than nonwhite (74% vs. 68%), and privately insured (62% vs. 51% for patients without private insurance). 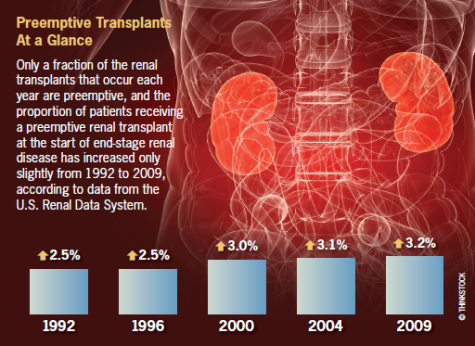 The authors concluded that their findings raise questions about the ethics of allocating a scarce resource to patients who are not yet on dialysis.

Of the 116,395 patients who started treatment for end-stage renal disease (ESRD) in 2009, 2,759 had a preemptive renal transplant as their first ESRD treatment modality, according to the 2011 U.S. Renal Data System Annual Data Report.