SEATTLE—Patients readmitted to hospitals within 30 days of receiving a kidney transplant are at increased risk of death, but in most cases, such early rehospitalizations are not preventable, researchers from the University of Pennsylvania in Philadelphia reported at the 2013 American Transplant Congress.

Early rehospitalization may signal recipient vulnerabilities rather than a defect in processes of care, said researcher Peter Reese, MD, who presented the findings of two analyses on behalf of lead investigator Meera Nair, MD. These vulnerabilities are independent of age and associated with death, but they are distinct from the pathologic processes affecting long-term allograft survival, said Dr. Reese, Assistant Professor of Medicine and Epidemiology.

He and his colleagues also identified factors associated with early rehospitalization after kidney transplantation, including time on a transplant waiting list, weekend discharge, and longer hospital length of stay (LOS).

The findings are based on retrospective studies of a cohort of 753 adult kidney-only transplant recipients at the University of Pennsylvania. Patients had a median age of 51 years, 34% were black, and 28% were diabetic. Of the 753 patients, 237 (32%) experienced rehospitalization within 30 days. The median time to rehospitalization was 10 days. The median duration of patient follow-up was six years. 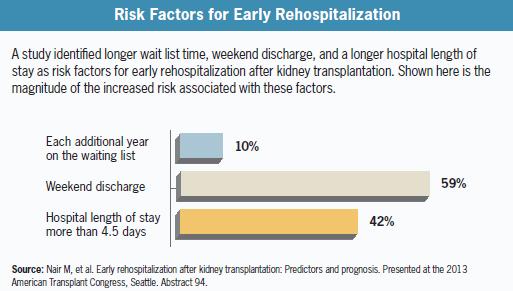 In the 201 patients whose rehospitalization was related to their transplant, the most common reasons were post-surgical complications (such as venous thrombosis, uncontrolled pain, and wound dehiscence), rejection, and volume overload or depletion.

With respect to study limitations, Dr. Reese pointed out that the study was conducted at a single center and it was retrospective and observational. Study strengths included primary data collection from thorough chart reviews of detailed medical records and the availability of extensive data about discharge medications, patient comorbidities, and process-of-care variables.