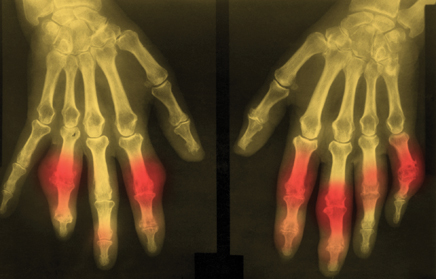 This is the third part of an ongoing series profiling case-based challenges in gout management with particular emphasis on renal considerations therein. Click on the following links for Part I and Part II of the series, or look at our March and April 2012 issues.

Mr. F, a 58-year-old man, presents for evaluation of gout. The patient first developed gout attacks approximately 10 years ago. Mr. F has a history of hypertension and hypercholesterolemia treated with atorvastatin. He also has a history of calcium oxalate renal calculi.

Physical examination shows the patient is obese (body mass index, 33.5 kg/m2). His blood pressure is 130/85 mm Hg. Mr. F’s pulmonary and cardiac examinations are normal. He has no edema. He has tophi, approximately 0.5 cm in diameter, on several fingers, and a 2 cm tophus on both the right and left elbows. Mr. F has seen several physicians over the years who told him that he “just had to live with” his condition, and that his unhealthy diet was contributing to his gout.

For the past 3 years, the gout attacks had become more frequent and the patient had developed worsening tophi that occasionally drain. Mr. F has been treated with colchicine and frequent courses of prednisone. He would like to stay on prednisone long-term for his condition. He says he was on allopurinol in the past, but cannot remember why it was stopped.

Gout is often perceived as a lifestyle disease, primarily the result of overeating purine-rich foods. While the clinician needs to evaluate dietary factors, it is also important to look at both lifestyle and medical issues that contribute to the disorder. The clinician should view gout as an opportunity to influence lifestyle choices and also to uncover any hidden medical conditions that may contribute to hyperuricemia.

While asking patients about their habits, particular attention should be paid to alcohol intake. Consumption of alcohol, especially beer, may be excessive and the patient may require counseling in this regard.

Mr. F drinks four to five beers per week. He eats out frequently at fast-food restaurants and does enjoy beef and seafood. However, he states that avoiding these foods in the past failed to decrease the frequency of his gout attacks.

Beer has a high content of guanosine, a purine that is converted to uric acid. In addition, alcohol increases the degradation of adenosine triphosphate (ATP) to adenosine monophosphate (AMP), resulting in increased uric acid production.1 Thus, beer is associated with a much higher incidence of hyperuricemia; liquor has only a modest effect, and wine is neutral. It would seem prudent to probe into the individual’s history and risk for alcoholism rather than suggesting a change from beer to hard liquor or wine.

One important consideration is that there are slight variations at the DNA level in the genes for urate transporters in the population. For example, large population studies have identified polymorphisms in the gene ABCG2 as a cause of hyperuricemia.3

The function of this gene had previously been unidentified, but this study led to further investigations identifying ABCG2 as a high efflux urate transporter. Polymorphisms in this gene may be responsible for up to 10% of gout cases.3 These small changes can affect the ability of the urate transporters to reabsorb urate. Such genetic differences between individuals are likely to explain why some individuals are underexcreters of urate vs. other individuals with normal urate excretion.