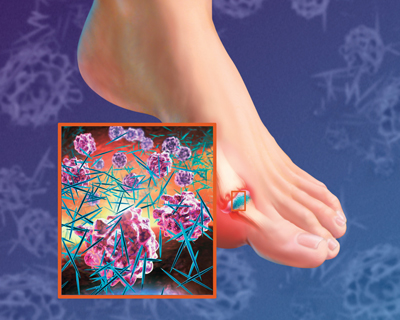 Gout is an inflammatory arthritis most often caused by the inability of the kidney to properly excrete uric acid. Acute symptoms are due to deposition of monosodium urate crystals in joints and tissues. Gout typically develops after years of sustained hyperuricemia.1

Each year, gout accounts for approximately 3.9 million ambulatory care visits in the U.S.,  predominantly by men but increasingly by women, too. Treatment occurs primarily in the primary care setting.2,3 Aging is an important risk factor in the development of hyperuricemia, with age-related decline in renal function also a consideration.

Hyperuricemia is associated with myriad comorbid conditions, including chronic kidney disease (CKD), hypertension (HTN), heart failure, diabetes mellitus (DM), and hyperlipidemia.4-7 CKD, for example, occurs in about 4% of the general US population but in nearly 40% of patients with gout.2,7

Patients with gout and CKD tend to be older, female, and have more comorbidities than patients with gout but without CKD.7 Moreover, these associated conditions can complicate gout management.5 For example, diuretics may increase the risk of hyperuricemia and acute gout flares. CKD itself may affect prescribing patterns for urate-lowering therapies.8,9

Mr. M, a 65-year-old retired postal worker, was diagnosed with gout  4 years ago after experiencing pain, swelling, and erythema in the first metatarsophalangeal joint; the presence of monosodium urate crystals in synovial fluid; and a serum uric acid level of 9.2 mg/dL. Initially, a nonsteroidal anti-inflammatory drug (NSAID) was effective in relieving the symptoms, but he experienced several more acute attacks over the next year and began treatment with allopurinol orally 100 mg/day.

Mr. M complains of mild-to-moderate pain, inflammation, and swelling of the same joint; he has had three acute gout flares in the past 5 months. His medical history includes stage 3 CKD, diagnosed 2 years ago after he presented with fatigue and lower extremity edema, with an estimated glomerular filtration rate (eGFR) of 48 mL/min/1.73 m2. His current serum creatinine level is 1.7 mg/dL.

Numerous studies have established a link between hyperuricemia and CKD.6,10 Most patients with gout have a relative impairment of renal clearance of urate due to abnormalities in renal tubular transport, explaining the association of hyperuricemia with decreased GFR and progressive kidney disease.5

In animal models, treatment with the urate-lowering agents allopurinol and febuxostat ameliorated systemic and glomerular HTN; in patients with kidney impairment, treatment with allopurinol reduced the proportion of patients with further deterioration of kidney function or progression to dialysis.11,12 While these data suggest that allopurinol or other agents may slow the progression of CKD, there are no large, randomized, double-blind, prospective trials to confirm or deny this association.

It should be emphasized that allopurinol and febuxostat are recommended only for the treatment of gout (defined by the presence of inflammatory arthritis caused by deposition of monosodium urate crystals) and not for asymptomatic hyperuricemia.

There is a linear relationship between serum urate level and systolic BP, and hyperuricemia has been identified as an independent risk factor for HTN4 and other cardiovascular (CV) risk factors, including age, male gender, obesity, DM, and insulin resistance.4 Several landmark trials established an independent risk relationship between serum urate levels and cardiovascular disease (CVD).