The American Urological Association (AUA) most recently published guidelines on the management of NMIBC in 2007.19 These 2007 AUA guidelines set out to address questions only when there was sufficient evidence upon which to base conclusions.

The guideline panel accepted 158 articles from 1998 to 2005 for consideration when drafting the guidelines. The panel performed hierarchical meta-analyses on the available data surrounding the clinical questions to be answered.

Unlike prior AUA guidelines, the 2007 NMIBC guideline panel performed meta-analysis on both randomized and nonrandomized observational data.

For the purpose of the guidelines, outcomes assessed included probability of recurrence and risk of overall progression, defined as either stage progression (stage Ta, T1, and carcinoma in situ [CIS]) or radical cystectomy (RC). Attempts were made to evaluate the risk of complications with particular treatments.

However, the authors note significant heterogeneity with regard to complication reporting in the studies evaluated for the guidelines. “From the evidence in the outcomes’ tables and expert opinion, the panel developed treatment guidelines.”19 As in prior AUA clinical practice guidelines, each recommendation was graded with respect to the degree of flexibility that could be applied in its implementation. Findings were characterized as follows: “option,” “recommendation,” and “standard,” meaning one has decreasing levels of flexibility (Table 1). 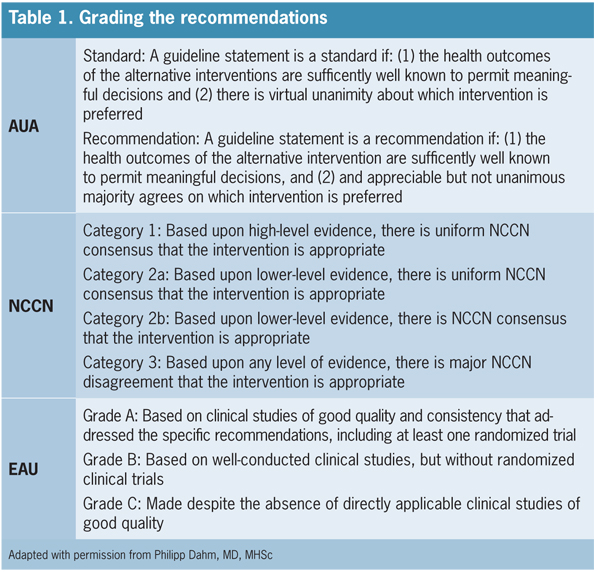 The guidelines review five index patients as a means to communicate the findings and recommendations. The AUA guideline panel considered the immediate use of single-dose intravesical chemotherapy an “option” secondary to cost, absence of pathologic data, side effects, and patient preference.

For the patient with multifocal and/or large histologically confirmed low-grade Ta lesions, or a patient with recurrent low-grade Ta lesions, the panel assigned a “recommendation” to the administration of an induction course of intravesical mitomycin-c (MMC) or Bacillus Calmette-Guérin (BCG). Furthermore, the administration of maintenance MMC or BCG was considered an “option.” The panel considered re-resection of a histologically confirmed high-grade T1 lesion in the absence of muscularis propria “standard,” secondary to high rates of understaging.

Furthermore, the panel considered the administration of an induction course of BCG followed by maintenance therapy a “recommendation” in the patient with high-grade noninvasive disease. Finally, for the patient with recurrent high-grade noninvasive disease after intravesical therapy, the panel assigned a “recommendation” rating to consideration of RC and an “option” rating to the consideration of salvage intravesical therapy. While the panel did apply a “standard” rating to the need for periodic surveillance cystoscopy following the histologic diagnosis of bladder cancer, neither interval nor duration was defined in the most recent AUA guidelines.19

The European Association of Urology (EAU) most recently updated guidelines for the diagnosis and management of NMIBC in 2011.20 Unlike the most recent AUA update, the 2011 EAU guidelines include more specific recommendations for diagnosis and follow-up.

Similar to the methodology used to develop the AUA guidelines, EAU panel members performed a thorough literature search for studies on Ta and T1 disease from 2008 to 2010 and CIS from 2004 to 2010. Panel members rated studies according to the Oxford Centre for Evidence-based Medicine Levels of Evidence (Table 2).21 Using available data, the panel members assigned a grade to each guideline recommendation. Grade A recommendations are based upon data that include at least one randomized clinical trial. Grade B recommendations are based upon well-performed studies in the absence of randomized data. 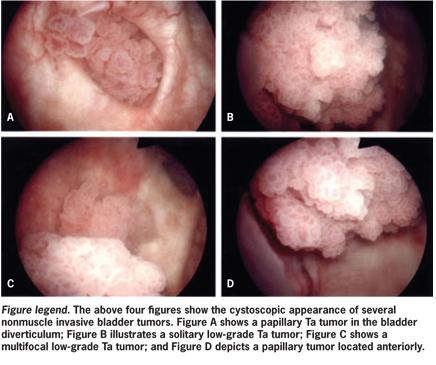 The EAU guidelines strongly advocate for the incorporation of published prognostic models into therapeutic decision-making. The guidelines specifically endorse the European Organization for Research and Treatment of Cancer (EORTC) scoring system and risk tables,22 which incorporate variables such as the number of tumors, tumor size, prior recurrence rate, T-stage, presence of concomitant CIS, and tumor grade to predict the risk of both recurrence and progression. Additionally, the guidelines recommend the routine application of the Spanish Club Urológico Español de Tratamiento Oncológico (CUETO) group’s predictive model for BCG-treated patients.23

Like the AUA guidelines, the most recent EAU update pays considerable attention to adjuvant treatment paradigms for NMIBC. In patients with Ta or T1 tumors at low risk of recurrence, the EAU guidelines assign a grade A recommendation to the administration of a single instillation of perioperative chemotherapy. For patients at intermediate- to high-risk of recurrence and intermediate risk of progression, the EAU guidelines endorse, with a grade A recommendation, the administration of a minimum of one year of BCG or intravesical chemotherapy.