Although sextant biopsy is inadequate and the current reference standard involves a minimum of 12 cores, there is a point of diminishing returns regarding the numbers of cores. We published findings showing that a 20- to 24-core transrectal saturation biopsy cannot rule out cancer and does not improve cancer detection as an initial biopsy technique. 15

Nevertheless, when these protocols are used for second biopsies, the likelihood of detecting PCa in the future is only approximately 4%. In our series, this occurred almost exclusively in men with PSA values greater than 10 ng/mL, so repeat biopsy after a second truly negative saturation biopsy. 16

Pathological findings on the initial biopsy can also suggest the likelihood of unrecognized cancer. The impact of HGPIN on the likelihood of finding undiagnosed PCa is controversial, but several recent publications have suggested that a single focus of HGPIN may be relatively meaningless, whereas multifocal HGPIN may suggest a potential of underlying cancer.

Even more suggestive of undiagnosed PCa is the finding of atypia (often termed atypical small acinar proliferation, or ASAP). Early reports suggested that there is an approximately 40% chance that cancer will be identified if such patients proceed to immediate repeat biopsy. Atypia may interpreted as a pathology report suggesting suspicion of cancer on the histopathology slides with inadequate sampling to confirm malignancy, so repeat sampling is almost always indicated.

It was hoped that saturation biopsy would preclude the need for repeat biopsy based on providing more tissue initially, but, unfortunately, we have reported that even men with this finding on saturation biopsy still have this same approximately 40% risk that the finding of atypia was actually incomplete evidence of underlying malignancy. 18

Alternatively, a pathological second opinion may clarify the diagnosis if subspecialty pathology has not been involved. In that setting, if malignancy is confirmed, unnecessary repeat biopsy can sometimes be averted. In one study, 1.1% of patients with a negative initial biopsy were found to have cancer on pathological reinterpretation, and another 1.3% was found to have ASAP when cases were reviewed based on a finding of PCa in a subsequent repeat biopsy, emphasizing the value of reinterpretation or second pathological opinion in equivocal cases. 19


Finally, a finding of atypia almost always warrants relatively immediate repeat biopsy due to the approximately 40% rate of finding cancer in that setting. Less clear is whether an additional repeat biopsy is indicated if atypia is also found on the second biopsy, so clinical judgment must be used in that setting.

Thus, stating a patient has had a “negative biopsy” is meaningless. Accounting for the number of cores obtained, number of sessions, and presence or absence of HGPIN or ASAP is mandatory when considering the likelihood that a patient has unrecognized PCa. Patients with a single “truly negative” (i.e., no HGPIN and no ASAP) 12-14 core biopsy may merit one repeat biopsy if their PSA remains high, subject to interpretation in the PSA range of 2.5-4.0 ng/mL (assuming the patient has more than 10 years predicted life expectancy based on comorbidities or age).

Although rising PSA is often the trigger for repeat biopsy, it is not clear that this criterion really defines the indication for repeat biopsy. Alternatively, percent-free PSA is more sensitive and specific for PCa than total PSA. 20 For reasons that are unclear, adding this value to the decision to perform repeat biopsy has not gained widespread use. Even in recent experience, using extended or saturation biopsy, percent-free PSA is highly related to biopsy outcome, including total PSA levels below 4.0. 21 Therefore, if patients with a prior negative biopsy have a very low percent-free PSA (12% or lower), their risk of having unrecognized cancer is high and repeat biopsy should be strongly considered. 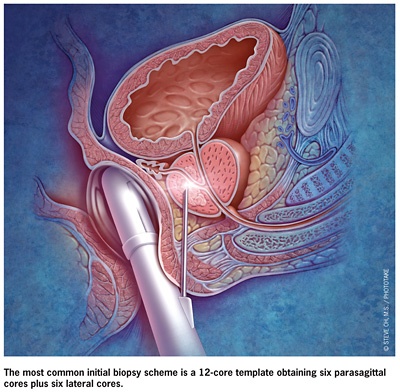 The most common initial biopsy scheme is a 12-core template obtaining six parasagittal cores plus six lateral cores. We have found that a 14-core biopsy that adds a core on each side at the extreme apex to the more common 12-core approach is the optimal strategy for initial biopsy based on the findings of unique cancers in that location in 3.3% of men, increasing our yield on initial biopsy from 44.2% to 47.5%.

For a second biopsy, we have found that a 20-core transrectal saturation biopsy adds no morbidity 25 and increases cancer detection by approximately 50% compared with extended biopsy, in  our experience. 26 For some patients a third biopsy becomes necessary, usually for persistently rising PSA or HGPIN, and in that situation saturation biopsy substantially increases cancer detec­ tion, as well.

Thus, our data confirm that immediate repeat biopsy solely for the indication of HGPIN is rarely if ever necessary if unifocal, and multifocal HGPIN only suggests a 10% chance that cancer was missed, again lower than most studies of repeat biopsy in the absence of HGPIN. More importantly, our data provide important information on the natural history of HGPIN. The risk of de novo cancer development is minimally increased in men with unifocal HGPIN compared to those with initial benign biopsy (by approximately 2% at three years and 4% at five years), but multifocal HGPIN more than doubles the risk of de novo cancer development at both three (12.5% vs. 29.0%) and five years (22.4% vs. 47.8%).

By reporting HGPIN not as a homogeneous entity, but segregated by unifocal versus multifocal disease, it appears that unifocal disease may truly have limited significance. However, multifocal HGPIN is a significant precursor to PCa development. Atypia always requires at least one repeat biopsy as discussed below.

The vast majority of PCa found in contemporary investigations originate from the peripheral zone. This may be evolving compared with early studies. For example, McNeal reported a 24% transition zone cancer rate before the PSA era. 28 However, Bazinet and coworkers stated that only 2.9% of their patients had transition zone exclusive cancer, 29 a trend corroborated by others. 30,31

Recent focus has shifted to obtaining anterior apical biopsies as prostate carcinoma often originates in this location. Studies on PCa distribution on radical prostatectomy (RP) specimens by Takshima and colleagues demonstrated that tumor frequency was highest in the mid-gland (85.5%) followed closely by the apex (82.3%). 32 Quadrant analysis showed that tumors were significantly denser in the apex to mid-gland, particularly in the anterior half of the gland. Bott et al conducted an analysis on whole-mount prostatectomy specimens with respect to the biopsy information. 33

Anterior tumors (more than 75% of tumor located anterior to the urethra) required significantly more biopsy sessions than posterior tumors (more than 75% of tumor located posterior to the urethra). They concluded that in patients with clinical suspicion of PCa but persistently negative biopsies, the anterior gland should be targeted in repeat biopsy. Elegant work by Villers has demonstrated that the anterior prostate harbors significantly greater incidence of PCa than believed based on biopsy series, probably because biopsy more reliably targets the more proximate and easier-to-access posterior prostate. 34