Clear cell RCC is the most common histologic subtype of malignant tumors of the kidney. This histology accounts for 75% of renal masses that are evaluated.7,8 Clear cell RCC derives from the proximal tubular epithelium and, in the majority of cases, has a clear cytoplasm with a large prominent nucleus.

Bilateral tumors are rare, occurring in only 0.5% to 3.0% of cases. Two well-described methods are used to further characterize clear cell RCC. First and most commonly, the Fuhrman grading system is used to classify RCC (See Table 1). Fuhrman grading was first described in 1982 and has been used to both describe renal tumors and make prognoses. Fuhrman grading has prognostic significance, with higher Fuhrman grades predicting a worse clinical outcome.9 The second method is chromosomal analysis. Clear cell RCC often has distinct genetic abnormalities, with the loss of the 3p chromosome as well as a frequent loss of chromosome 9p.

Clear cell RCC is associated with von Hippel-Lindau (VHL) disease. It is the evaluation of this genetic abnormality that has led to some of the more significant advances in the treatment of clear cell carcinomas. VHL disease is an autosomal dominant disease with a prevalence of 1 in 36,000 in the United States.10

The clinical manifestations include the development of clear cell RCC, pheochromocytomas, retinal angiomas, and central nervous system hemangioblastomas. The genetic abnormality associated with VHL disease is the loss of chromosomes at 3p25-26. Through careful study of the cytogenetics of VHL patients, the gene at this locus was found to be a tumor suppressor gene associated with familial clear cell carcinomas as well as a large majority of sporadic RCC.

The VHL protein sequenced by this gene was found to complex with the hypoxia-inducible factor (HIF-1) to promote the degradation of HIF-1. HIF-1 regulates production of multiple proteins, including vascular-endothelial growth factor (VEGF) and other cell regulatory proteins that are normally kept in check but which are significantly elevated in times of hypoxia, starvation, and stress. 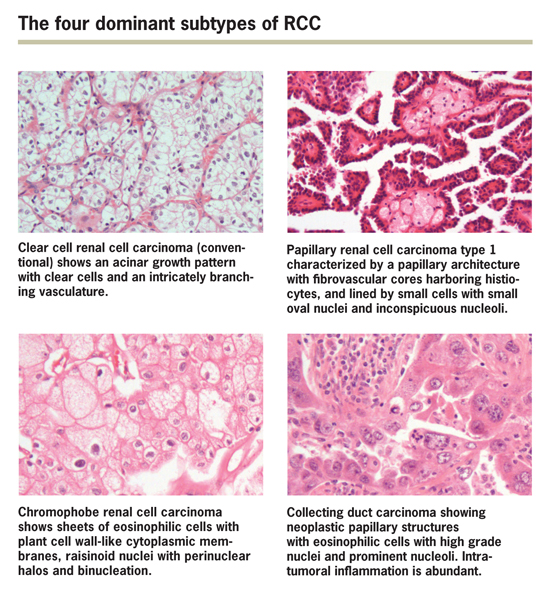 Clear cell RCC is known to have an aggressive course, but one variant recognized by the WHO 2004 classification—multilocular cystic RCC—has an indolent course with a favorable clinical outcome. Multilocular cystic RCC’s are well circumscribed masses that are characterized by multiple non-communicating cysts separated by thick fibrous septae, which are often hyalinized. The cysts are lined with clear cells; however, they more commonly show an attenuated lining.12

The hallmark for a multilocular cystic RCC diagnosis is the presence of small nests of clear cells within the cyst wall. While VHL mutations are noted in multilocular cystic RCC, it earned separate classification due to its indolent course and low malignancy potential. Clear cell renal cell carcinoma are positive for CAIX (carbonic anhydrase IX), vimentin, CD10, and RCC antigen by immunohistochemistry.

The second most common variant, papillary RCC, has a well-defined genetic abnormality associated with it, much like clear cell RCC. Approximately 10%-15% of renal masses are papillary RCC, with a small portion of these related to the familial syndrome. To review the characteristics of papillary RCC, we first should examine the histologic and structural appearance of papillary tumors.

Papillary RCC was not considered a distinct subclassification of RCC until the Heidelberg and Rochester consensus meetings. Furthermore, in 2004, WHO officially recognized the distinction between the two types of papillary RCC.

Papillary RCC is derived from the distal convoluted tubules. As the name implies, papillary RCC is composed of a single or pseudostratified layer of cells arranged around a fibrovascular core to create the characteristic papillae. These tumors are notable for the presence of aggregates of foamy macrophages within the papillae and could also have psammoma bodies. These characteristics are common to both subtypes of papillary RCC. Papillary type I and type II are distinguished mainly by histologic and cytologic criteria.

Type I tumors are more common and are composed of small cells characterized by their scanty basophilic cytoplasm and low nuclear grade. The fibrovascular cores of the papillae are lined with a single layer of cells. In contrast, type II tumors are composed of large cells with eosinophilic cystoplasm and higher grade nuclei with pseudostratification along the fibrovascular core. Fuhrman grading has been shown to provide good prognostic information regarding these tumors.

Therefore, with higher Fuhrman grades, type II papillary RCC has a worse prognosis than type I, though both of these tumors have a more optimistic prognosis than clear cell RCC.13 Genetic analysis of papillary tumors has revealed a definitive genetic characteristic. In papillary RCC, tumors do not display the loss of the 3p allele, but instead show multiploidy at chromosomes 7 and 17.

In males, papillary tumors are also notable for the loss of the Y chromosome. Hereditary papillary RCC is associated with alterations in the c-met oncogene, also located on chromosome 7, but trisomy of chromosomes 7 and 17 are also identified in tumors associated with this syndrome.14 Papillary renal cell carcinoma is positive for CK7 and racemase by immunohistochemistry.